Cut and Paste: 400 Years of Collage

Cut and Paste: 400 Years of Collage

This show explores the ways in which collage has been used to create work that is, by turns, playful, chaotic, expressive and innovative 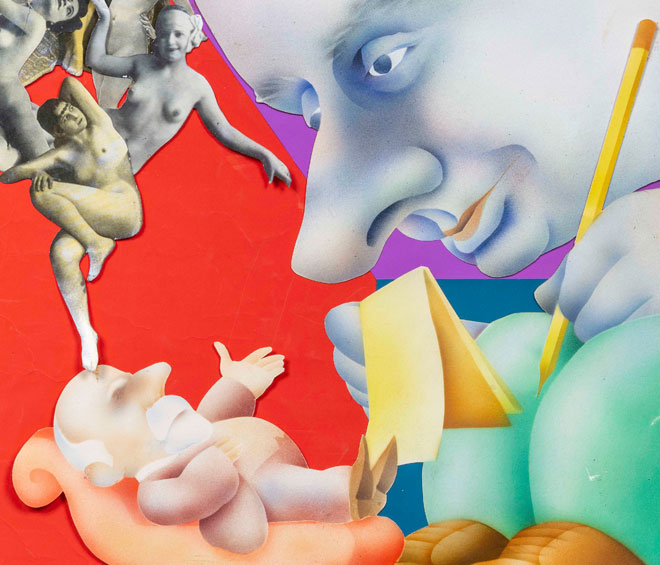 Often assumed to be a 20th-century innovation, because of the use of the technique in surrealist, cubist, futurist and pop art, collage has, in fact, been around for centuries, as the world’s first survey exhibition devoted to it reveals. Cut and Paste: 400 Years of Collage, at the Scottish National Gallery of Modern Art in Edinburgh, charts the art form from the 16th century to the present day. Including 250 works and almost as many artists, both professional and amateur, the exhibition is a chance to explore the myriad ways in which the technique has been used to create work that is, by turns, playful, chaotic, expressive and innovative.

Beginning with books and prints from the 1500s, which include anatomical “flap prints”, through to Victorian scrapbooks and DIY collages – when these forms of collage were a fashionable hobby – the origins of what became the choice of revolutionaries and iconoclasts are revealed. Including the striking Baby (Anonymous, c1890), a collage of die-cut lithographs on paper, this early work reveals the ways in which collage evolved as print media did: when machinery was invented to produce the images for Christmas and Valentine cards and educational books, both artists and amateurs saw the potential for the use of these mass-produced materials for other, original works.

Baby is decorative and yet disarming; with a pigeon, floral patterns and a strange-looking infant wearing a pink sash, it creates an interesting and also odd perspective on Victorian advertisements and fashions. Collage at this time, however, was not considered an artistic pursuit, but an amateur one; professional artists still tended to use oil paint for their work.

In the 20th century, however, rebellious artists and their movements began to incorporate collage into their repertoire, partly due to the increased and compelling use of print media in the world around them, but also in an intentional act of defiance against the established forms used by their contemporaries and their predecessors. Pablo Picasso led this trend, using newspaper cutouts and ripped paper in his drawings and paintings from 1912. In Tête (1913), he created a cubist impression of a head using roughly cut or ripped pieces of paper and a drawn semi-circle, showing the essential form in a way that is also expressive and provocative; simply the ripped edges and the absence of familiar facial features or expressions is innovative and compelling.

Picasso, in experimenting with collage, also inspired surrealists, dadaists and cubists such as Kurt Schwitters, Joan Miró, Hannah Höch, Max Ernst and Georges Braques (all of whom are included in the exhibition). There are so many highlights in the exhibition that it is hard to pick out just a few, but I found Man Ray’s Involute (1917) and Ernst’s Untitled (1921) particularly striking, as well as Raoul Hausmann’s satirical and haunting The Art Critic (1919-20), George Grosz’s comical Imaginary Self-Portrait (1930s) and The Funeral of Ebert (1923) and Erwin Blumenfeld’s beautiful Charlie (1920), featuring a crucified Charlie Chaplin, in a mesmerising and startling portrait of the performer as an anti-establishment martyr. Several works by Höch, such as From the Collection: From an Ethnographic Museum (1929), also stand out, though it must be said that seeing these works next to each other, and noticing the connections between them, is the real draw; the exhibition itself becomes a form of collage, tracing the genealogies of the artworks and their associations with one another, and raising subtle questions therein.

For many of these artists, collage opened up a new form of expression that was at once abstract and visceral. The ripping and reappropriating of mass-produced materials was, inherently, a means of subverting the wider systems and hierarchies that produced them, as well as existing aesthetic codes that had been sustained by elitist or conservative institutions. The surrealists, in particular, used collage to create new dreamlike “realities” through their “destruction” of old forms and images; this anarchic and rebellious spirit was often a reaction to the chaos of war and revolution, both a product of it and a personal rejection of it. Schwitters, for instance, used collage as a form of aesthetic rebellion in his dissonant and strangely melancholic Mz 299: for VJ Kurin (1921). Carlo Carra, meanwhile, shows the force and destruction of war very clearly and viscerally in Atmospheric Swirls – A Bursting Shell (1914).

While artists including Picasso, André Breton, Carra and Schwitters expressed deep discontent and disillusionment with such conflict, and so created dissonant and melancholic works, other artists working at the time created images that appear more harmonious. The Russian constructivists, for instance, associated their materials and their images with socialist workers and the ideals of communism; their works are provocative, but in a way that seeks resolution and order, ultimately. The rayonists (who practised a Russian form of futurism), meanwhile, also created visually satisfying, harmonious works; in Natalia Goncharova’s costume design for La Liturgie (1915) for instance, she fuses the visual language of theatre and the ballet with the stark and galvanised style of futurism. 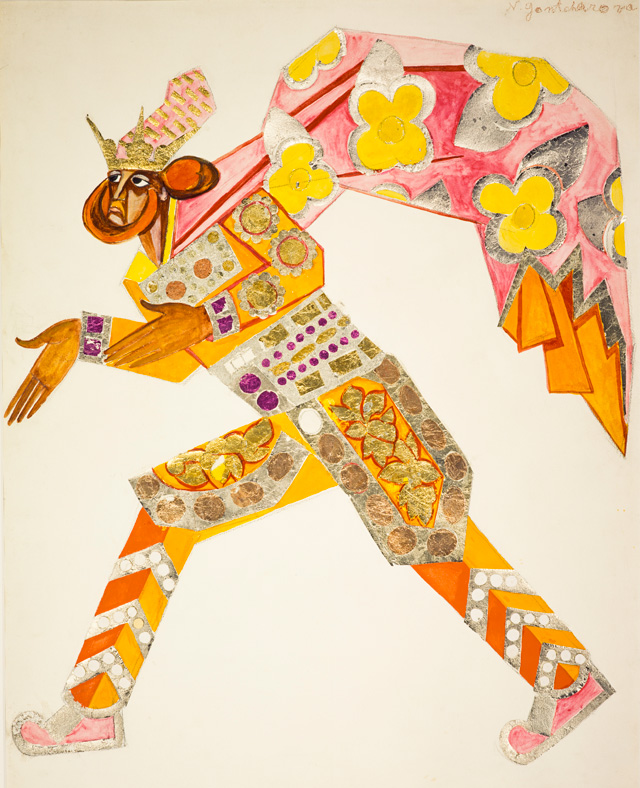 Natalia Goncharova, Costume Design for One of the Three Kings in La Liturgie, 1915. Watercolour, pencil and collage 62.2 x 47.6 cm. National Galleries of Scotland: Purchased with funds given by two anonymous donors 1962.

Having used collage to engage with the chaotic and changing world around them during the two world wars, the surrealists, dadists, cubists and constructivists inspired postwar artists to use the method for their own innovative works. While postwar artists did not necessarily engage with political upheaval and social and physical devastation in such a visceral way as their predecessors, collage still signified a rejection of tradition, whether social or political, and it was used with these principles in mind. With even more accessibility to mass printed media and photography, collage became a way to engage with media as a force in itself, as well as a convenient new material that could inject a work with uncanny realism. 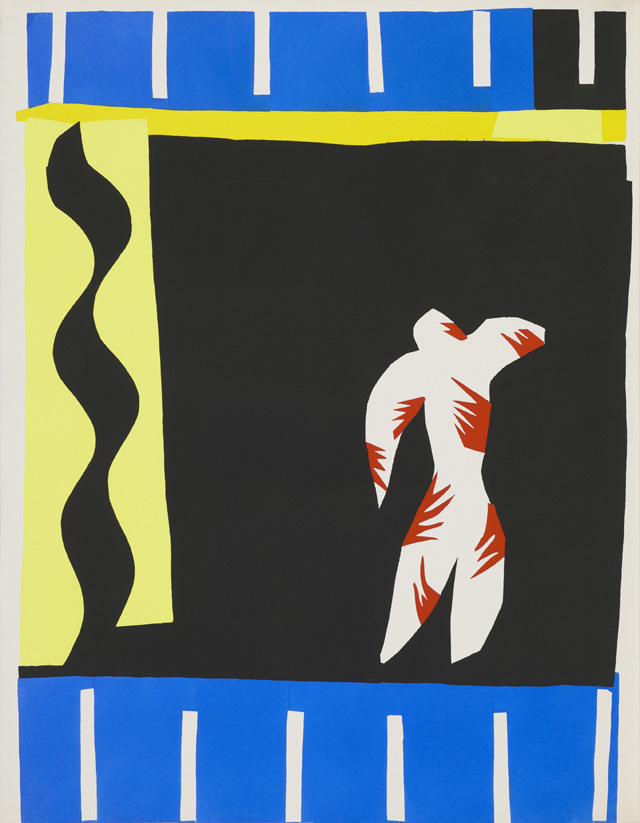 Postwar collage became associated with social liberation and a joyful sense of rebellion, as exemplified in the work of Henri Matisse, Robert Rauschenberg and Peter Blake. Collage films of the 1960s are also shown, such as Eduardo Paolozzi’s History of Nothing (1963) – an important addition to the exhibition, given the vast implications of the technique of collage in film at that time and subsequently. (If anything, it would have been good to have seen more related film work.) The ability of collage to depict social unrest, confusion and questioning is clear in the many protest works from that period and into the 70s; we are shown the brilliant and inventive work of feminist artists Carolee Schneemann, Linder and Hannah Wilke, as well as punk artists such as Jamie Reid (his original collages for the Sex Pistols’ album Never Mind the Bollocks and posters are exhibited) and the subversive work of Monty Python founder Terry Gilliam.

By the end of the exhibition, across four rooms and more than four centuries, the fascination with and use of collage by artists, film-makers and also poets is clear and inspiring. As a testament to the chaotically connected ways in which people interact and experience life, Cut and Paste is a strangely moving exhibition. Collage finds expression in visceral, chaotic experiments, in clashing and dissociating, in changing and bending meaning and balance. While collage has long been an inherently rebellious technique, what seems most radical about it is the way in which it reveals the connections between disparate forms, people, events and materials. It uses, and often depicts, chaos, but in every artwork in this exhibition, there is nevertheless a sense of harmony. As a collage in itself, this exhibition reveals the interconnectedness of human expression, and shows the vast possibilities of the form for future artists. 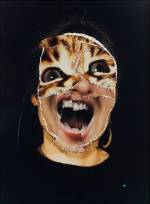