Another World: Dalí, Magritte, Miró and the Surrealists

Another World: Dalí, Magritte, Miró and the Surrealists

In Edinburgh this summer, coinciding with the Fringe Festival at first, and then extending into next year, the Dean Gallery’s exhibition of surrealist art is an appropriately escapist and inventive choice

The show is both comprehensive and accessible, displaying masterpieces by Salvador Dalí, Pablo Picasso, René Magritte, Alberto Giacometti and Joan Miró. It is also the highlight of the Scottish National Gallery of Modern Art’s 50th birthday celebrations, and indeed expresses a mood of wonderment and celebration, featuring works such as Picasso’s Lee Miller (1937), and Edward Wadsworths’ Pendant (1942). If, in these gloomy financial times, one cannot afford a holiday, then surely ANOTHER WORLD offers an appropriately colourful escapism (with less queuing, in all probability).

As well as including pieces on loan from public and private collections, the exhibition is also the first public viewing of the Scottish National Gallery of Modern Art's whole collection of surrealist art – giving a particularly encompassing overview of one of the most breath-taking art movements of last century.

Taking the viewer from Surrealist beginnings in Dadaism, and a response to the monstrosities of World War One, the movement was intrinsically revolutionary and escapist, and reacted against such a sad, broken reality by expanding into the unknown world of dreams and subconscious – the surreal and the free. The Dadaists reviewed the position of art in the modern, changed world, and sought to expand traditional methods by crossing into music, theatre, dance and literature, as well as visual arts.

Dadaism emerged first in Zurich, then in New York, Paris and Berlin. The style was notably anarchic and satirical, but after the Second World War, those involved (now mostly in Paris, which had quickly become the centre for modern art) moved away from the violence and anarchy of Dadaism (which had become all too commonplace in reality after the war) to a heightened, more intellectual derivation, to become known as Surrealism. Breton became the leader, and encouraged an interest in dreams and the subconscious, and Freud’s writings on psychoanalysis. The idea that understanding one’s subconscious would unlock deeper truths and meanings was central to much of the Surrealist work that emerged in post-war Paris – not only in the visual arts, but also in the literature of Paul Eluard and Robert Desnos, among others.

ANOTHER WORLD focuses on paintings, collages and sculptures, however – showing the ways in which the technique “automatic painting” (painting from imagination and dreams rather than realistic life) revolutionised modern painting. The work of Joan Miró and André Masson, in particular, shows the heights reached with this approach. René Magritte, on the other hand, used traditional methods, to paint often ordinary objects, but played with scale and perspective and context, to confuse and entertain the audience. Other artists used collage, frottage and grattage to achieve a spontaneous, rebellious style – especially Max Ernst and André Breton. Sometimes, a group would play a game called “Le Cadavre Exquis” (The Exquisite Corpse) – which would involve three or four artists to add to a collage, without seeing what the others had already added – with often, superb results.

In some sense, every group exhibition is a collage of sorts – an Exquisite Corpse of past works – whose success lies in a delicate balance of careful details, luck and lighting. The Dean Gallery has triumphed with its Surrealism exhibition. It has offered its audience another world, which suits the summer, the year, the mood. Surrealism was originally a reaction to a terrible Second World War – that had left European countries on the brink of bankruptcy; so it is appropriate that we should revisit its triumphant escapism and its glorious visions, when unwittingly we in part repeat the history Surrealist art was set against. 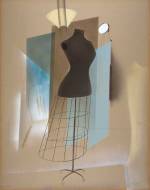 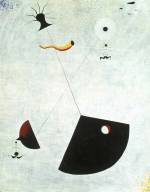 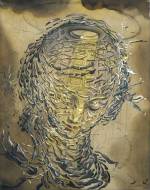 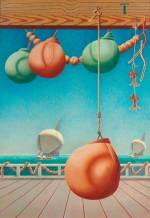