The first exhibition to fully survey the work of Winifred Nicholson was staged by the Tate Gallery in 1987. Although she is as well known for being the first wife of Ben Nicholson as she is for her paintings, her career as an artist spanned 60 years. Remarkably, little has been written about her, considering the quality and strength of her work. The exhibition presented at the Dean Gallery in Edinburgh this summer, now travels to Banff and the Isle of Skye. It focuses on the work she did on her regular trips to Scotland from the late 1940s to the 1950s, plus later works from 1980-81. This small body of work, just 17 paintings, possesses the immediacy and spirituality that characterises her oeuvre. She painted landscapes and flowers with a rare understatement and spiritual power. The trips to Scotland were made with her friend, the poet Kathleen Raine. Raine described the meaning in Nicholson's flower paintings: 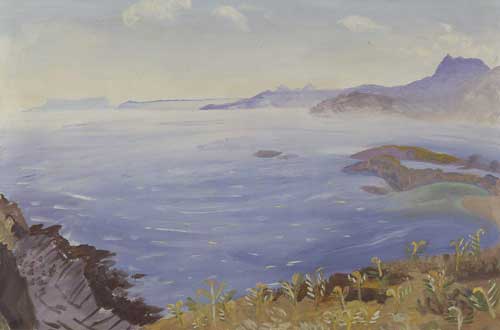 The botanical structures of flowers didn't particularly concern her although she had a wonderful gift of communicating the structure of a flower with a few brush marks. She never was wrong about it, but at the same time she didn't dwell on it. They were flowers painted with the imagination and not with the scientific eye. The flowers communicated a whole atmosphere … they told about places, about the light on a certain day. They were focuses for something total which came into every painting [which] was more than the flowers … you didn't just look at the flowers, you received a whole atmosphere, meaning, quality.1

Winifred Nicholson loved Scotland, especially the Highlands and the Western Isles. The quality of light, its range and changeability inspired some of her finest late works. She particularly loved the Isle of Skye, South Uist and Eigg, appreciating their remoteness, traditions and way of life. Kathleen Raine would compose poetry while Nicholson painted. Some of Raine's poetry is on display in the exhibition and it complements the paintings beautifully. In 1950 Winifred Nicholson wrote to her son, from South Uist where she was staying in a remote croft:

This is a place after my heart. I wonder if you would like it. Not a tree, not a bush. But grey boulders, grey rocks. Grey stones, grey mountains. And bog in between - In the bog, lochs with waterlilies, and rare ferns that love the black peaty soil - The sea full of grey mysterious islands and rocks, seals and seabirds. White glistening beaches and transparent sea all the way across to Eriskay. Blue mountains of Barra to the west - and the Cuillins far away snow covered to the south - There are five other cottages in Glendale and no road nearer than three miles - one comes by boat and then walks… Peat fire, water carried from a well, everything as primitive as you want.2

In the 1920s, Nicholson established herself as a talented flower painter, even gaining the reputation of 'the female Van Gogh'. The spiritual dimension of her work was recognised in a review in The Times (6 July 1928), declaring:

Genius is not a word to be used lightly, but - on the understanding that it applies to aptitude rather than to actual performance - it is the only word for Mrs Winifred Nicholson as a flower painter. She has an uncanny sense of flowers, of what they are behind their shapes and colours, as emanations of earth, and her technical methods are right.3

Born in 1893 in Oxford, Winifred Roberts was brought up in an artistic milieu. Her mother was an amateur watercolourist and her maternal grandfather, George Howard, the 9th Earl of Carlisle was an artist and friend of the Pre-Raphaelites. Winifred studied at the Byam Shaw School of Art in London (1919-20) and in 1920, travelled in India where her father was Under Secretary of State. There she noticed 'how eastern art uses lilac to create sunlight'.

The bright light of India made her conscious that the sun is the source of all light and therefore the source of all colour, and she began to ponder deeply on the art of colour. In her article 'Unknown Colour', published in Circle in 1937, she wrote that 'Colour … was used as melody by the Easterns' and this phrase reveals her long held belief, initiated by her Indian experiences, that music and colour are related abstract disciplines.4

It was also in 1920 that Winifred married Ben Nicholson, and their artistic alliance was mutually beneficial until Winifred's death in 1981. They travelled extensively and their first home was near Castagnola in Switzerland. They also worked and lived in England and visited Paris frequently. They were involved with an influential artistic circle in Paris and liased between London artists and those working in the French capital between the wars. In 1924 they moved into a 17th century farmhouse near Hadrian's Wall, in Cumbria which she kept until the end of her life. One of Ben and Winifred Nicholson's closest friends was the artist Christopher Wood, whom they had met in 1926. They painted together in Cornwall. Winifred Nicholson exhibited regularly during the 1920s and became a well-respected artist. She was also involved in the wider movement of abstract art in London, which was largely dependent on their acquaintances and friends in Paris. As the John Piper exhibition at the Dulwich Gallery earlier this year revealed, there was a lively interaction between artists in London and Paris at this stage. Winifred and Ben Nicholson were central to this movement.

Two events disrupted Winifred's life between the years 1930-31. Christopher Wood was killed in 1930 and, the following year, Ben Nicholson left Winifred and their three children to live with sculptor, Barbara Hepworth. Winifred took her children to Paris in 1932, where she took an apartment and stayed for six years. During this time she consolidated her friendships with leading artists of European Modernism: Jean Hélion, Hans and Sophie Taeuber-Arp, Cesar Domela, Jean Hugo, Piet Mondrian, Alexander Calder, Alberto Giacometti, Georges Braque, Hans Hartung, and Constantin Brancusi.

After a remarkable early career at the centre of the modern movement, Winifred Nicholson continued to exhibit and to paint flowers and landscapes with a sensitivity and spirituality. The small seascapes painted in Scotland epitomise her preoccupations with atmospheric conditions, with water, light and colour. The Hebrides provided an ideal environment for her. The works are essentially affirmations of life, as indeed she viewed the actual act of creation. Life in the Hebrides with her long-term friend Kathleen Raine (they were friends from 1948 until Winifred's death in 1981) was 'stone age'; they ate nettle soup, mussels, cockles and razorfish. She loved the lack of human habitation. The animals there she regarded as her company and she made lists in letters to her children: sheep, rabbits, cuckoos, bats, eiderduck, sandpipers, eagles. She made wise and amusing observations of the natural phenomena sharing a similar sensibility as the Finnish author, Tove Jansson in the Summer Book.

Kathleen Raine described Winifred's spirituality as a living essence of the present moment; 'to that moment she brought the whole of herself to meet whatever epiphany was present before her eyes, as a gift, as it were, from the ever-flowing world'. Raine also described the periods working with Winifred as the happiest and most productive of her life.

'… to be with Winifred was to be with a totally committed artist, for whom each day shed its light on a new theme for a painting. The ever-changing light of the seasons, the flowers, the weather, the arrivals and departures of children and grand-children, all these gave her what she called the 'stories' of her paintings in which she captured the day, the hour, and ever-fleeting present.'5