The opening of two small solo shows by mixed-media artist Tauba Auerbach and poet-painter David Robilliard on the same night, and for the same exhibition run, at the ICA this month seems to be either an ineffective attempt to contrast two very disparate artists, or an act of ill-considered programming.

These two artists’ media, subjects, ideas – and even their historical separation – place them worlds apart: Robilliard’s very simple coloured line paintings, all made and first exhibited in the late 1980s, incorporate words from his poetry that explore the experiences of gay men in London at that time, whereas Auerbach has made new sculptural work infused with mathematical theory for this, her first solo show in the UK. If it is chance and opportunity that have led these shows to share the ICA’s galleries over the next few months, then the fact of their cohabitation should be left without further interpretation beyond the observation that Auerbach’s is clearly the superior show, perhaps by virtue of being more explicitly “contemporary”.

Auerbach is known for her explorative mixed-media works, and her current preoccupation is topology – the mathematical study of shapes and spaces and their interrelationship. Here she expresses in 3D form her belief that topology connects everything, whether physical, social or psychological, including molecular structures, ideas and thoughts, chemical processes and social interactions. Auerbach’s interest in this area, specifically in the presence of symmetry and asymmetry in objects or ideas, was sparked by her reading of Martin Gardner’s popular 1964 book The Ambidextrous Universe, republished in 1990 as The New Ambidextrous Universe, which explores such mind-boggling concepts as 4D space, left/right symmetry in particle physics and “chirality” in objects – the phenomenon that shows that an object’s mirror image can be non-identical to the object itself.

Although the exhibition’s wall labels do no work to explain these concepts in relation to the pieces on show, it is clear on entry that the installation as a whole is a thesis on geometry and symmetry. At the show’s opening, Auerbach’s studio assistant outlined the artist’s meticulous process of planning the exhibition space and the sculptures’ position within it using a computer modelling programme, and described a several-day-long hang, in which the pieces were placed and re-placed repeatedly before a satisfactory layout was reached. The first work in the show, displayed inches from the ground on a low plinth, is Square Helix (Z) (2014), a long, thin sculpture consisting of two shaped metal rods, one orange and one blue, that explores the asymmetry of the double helix structure of DNA. Knit Stitch and Latch (both 2014) also examine the interrelation of matter at macroscopic levels: in both, the two intertwined rods of metal neither touch, nor can they be disentangled – they simply co-exist, hinting at the violence and destruction that it would take properly to separate them.

Two plywood floor sculptures tackle the idea of symmetry in nature through the paring and re-ordering of wooden cross-sections and the corresponding interruptions and confluences that this causes in the graining of the wood. But the show’s most fascinating piece, and the one that inspires the greatest adulation with regard to process, is S Helix (2014). A rod features again, but this one is made of glass, bent impossibly over and over in defiance of its brittle structure, and resting on a coloured plinth that throws subtle oranges, golds, pinks and yellows up through the glass’s refractive form. The plinth is an incredible object in itself – its colour can dazzle at times, and, at others, glimpsed from points across the room, can seem suddenly drained, sub-chromatic, the colour of nothing. To learn that both the plinth and the glass rod were commissioned, rather than made, by Auerbach may disappoint some, and yet this act of commissioning and travelling to observe and learn new ways of working with materials is part of Auerbach’s inquisitive approach to the physical world, and is what makes her work consistently surprising and beautifully conceived.

Auerbach’s installation is a discourse in a certain kind of directness: fundamental, naturally occurring forms, seen in all their naked geometrical wonder; pure colours; shapes interacting in a space. With Robilliard, who had his last major retrospective in 1993, we are reintroduced to a narrative directness – one of personal experience forced down the throat through cheeky aphorisms and crude acrylic figures on canvas. Robilliard’s mirror on the universe is tied to the soil beneath us, to animal behaviour and sexual encounters – attraction and physical connection as it is experienced first-hand, rather than through the languages and postulations of maths and science.

After Auerbach’s glass-, metal- and mind-bending sculptural feats, Robilliard’s poem-paintings are reassuringly down-to-earth. Life Isn’t Good, It’s Excellent (1987) assures us quite simply, even naively, that everything is going to be just fine. An odd prescience is exhibited by Instant Husbands Come in Packets (1987) and Disposable Boyfriends (1987), which, seen with contemporary eyes, satirise today’s internet and app dating culture with its ready-severable emotional ties and quick-fire gratification. Don’t Get Sand in Your Boiled Eggs (1988) reduces a couple’s tiff to two heads in profile, staring, with a third in between acting as mediator or perhaps the subject of the dispute; the simple power of a glance is celebrated further in A Roomful of Hungry Looks (1987), in which floating heads variously enact what it means to “make eyes” at someone across a room.

Robilliard’s paintings are amusing, often explicit, extremely personal and occasionally moving, and they are certainly not to everyone’s taste. Yet Robilliard’s universe seems more satisfying, somehow, than Auerbach’s in its attempt to address social and emotional “interconnectedness”. For Auerbach, things seem to have a “Yes/No” quality (to reference the title of Robilliard’s show), as evinced by her sculptures’ too-clean lines and impersonal, lab-style presentation. Yet with Robilliard, there are no absolute yesses or noes: life is about interrelationships and emotional colour expressed through a seemingly infinite number of dimensions, with new dimensions discovered every day with a glance, a thought or an argument, and all revealed through the refractive chaos of the prism of existence. 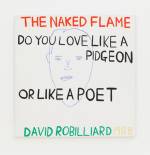 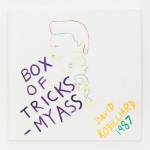 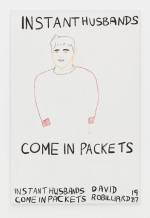 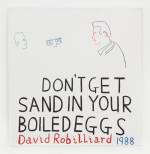 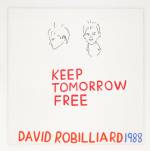 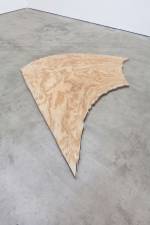