Stephen Farthing, Rootstein Hopkins Chair of Drawing, talks to Janet McKenzie about his obsession with finding an adequate definition of drawing – and how digital imaging is changing the way it is taught today

Stephen Farthing was elected a member of the Royal Academy of Arts in 1998. He is Rootstein Hopkins Chair of Drawing at the University of the Arts London and is represented by the Purdy Hicks Gallery. His recent publications include Art: The Whole Story and Derek Jarman’s Sketchbooks, both published by Thames & Hudson. He edited The Drawn Word with Janet McKenzie, published by Studio International, May 2014.

Janet McKenzie: For the past decade, you have been constructing a definition of drawing. In your own practice and in teaching, how did this come about?

Stephen Farthing: The seeds were sown when I began to wonder what people really meant when they used the word drawing. It became a project when I read what I thought was the OED’s totally inadequate definition of the word drawing. Over time, I gave more thought to how drawing was taught, and became interested in my memory that not one of my drawing teachers ever tried to explain to me what drawing was. They just got us to do it, then made value judgments over how well they thought we had done it.

As I started to read critically some very smart people’s ideas about drawing, I began to realise that the question “What is drawing?” was not one that most commentators were prepared even to try to answer. So the project was born.

JMcK: You edited, with Ed Webb-Ingall, the new book on Derek Jarman’s sketchbooks. What can we learn from Jarman about drawing and ideas?

SF: That drawing can be a very useful tool when used as a part of a planning exercise, especially as a way of developing and sharing possibilities. In Jarman’s case, this was within film-making. That writing and drawing are perfect page partners.

JMcK: As the Ruskin Master of Drawing at Oxford for 10 years, and now Rootstein Hopkins Chair of Drawing, how, in your view, has drawing changed or developed in the education in this country over the past 20 years?

SF: That is a big question. Most student in the UK today don’t seem to have learned to draw, nor are they expected to be able to by their peers and teachers in the same way that I was. Having said that, between 1990 and 2000 (as the internet took off and digital cameras and laptops became affordable), when I was Ruskin Master of Drawing, every student accepted into the school could draw reasonably well and, by the time they graduated three years later, they could all draw better than when they arrived. The same students were not reactionaries; they were also working with digital imaging. That said, I think a lot of fine artists don’t feel they have the same need to be able to draw as students of my generation. The reason? Digital imaging has changed how we harvest, handle and store visual information. Today, most students have a laptop not a sketchbook – the smart ones, however, have both.

Perhaps the most useful observation I can make on this subject is that I suspect since about 2007 the handmade has been coming back into fashion. This is because of our familiarity with computer software and a rebirth of interest in funky individualism. So, unskilled draftsmanship has become cool – which I’m not against.

JMcK: How important nowadays is drawing from the model, the discipline of drawing every day?

SF: Probably unimportant. When Ruskin started his art school in Oxford, he didn’t allow life drawing to be put on the curriculum. He didn’t believe it was relevant, other than for students training to be artists. It is, after all, extremely difficult to do well, yet really enjoyable if it’s taught well. However, it takes time: lots of hands-on practice, something the contemporary art school week does not have much time for.

JMcK: Drawing by non-artists (musicians, surgeons, cartographers) has increasingly been recognised as intriguing for artists. What non-artist drawing has most influenced your own art practice?

JMcK: Can you describe the interface between writing and drawing?

SF: The point at which you can write it but not draw it, and draw it but not write it.

JMcK: In our recent book, The Drawn Word, the artist contributors present a very wide definition of drawing. How are dance movements or shadows forms of drawing?

SF: Dance is right on the edge of my understanding of drawing: dance is multidimensional, but drawing I define as 2D. The reason I am prepared to entertain dance is because of its relationship with gesture, and gesture is where I believe drawing begins. Point towards an object and you draw a virtual line between the end of your finger and what you are pointing at. Shadows are much more straightforward – they are 2D tonal images “drawn” with light. They are the translation of multidimensional events into 2D. Some occur as a result of natural events; others are manmade.

JMcK: How can maps be described as “narrative landscapes”?

SF: Maps tell two stories: the first usually concentrates on the shape of the environment being mapped; the second the priorities of the person or persons and cultures that drew them. For me, that is where the narrative resides.

JMcK: How would you describe the legacy and impact of Marcel Duchamp on contemporary drawing?

SF: Duchamp seemed to value equally the substrate – the surface the draftsman chooses to draw on – and the mark he makes on it. I’m thinking here at one end of the scale he employed; about The Large Glass (1915-23) and its glass substrate and, at the other, of the five capital letters and facial hair he drew on a print of the Mona Lisa, the print being the substrate.

JMcK: My favourite of your paintings is Painting the Atlantic (2004), where the whole surface is treated with fine calligraphic marks, forming an arena for dialogue. It has to be rolled like a Chinese scroll to be transported, and restretched to be exhibited. The layers of paint seem to be metaphors for layers of experience, of memory, of the impossibility of absolutes. Can you explain its genesis and development?

SF: Since I became a professor of drawing, I have spoken less and less about painting. I enjoy painting and theorising about drawing, but now work to keep those two worlds apart. Having established that as my starting point, all I have to say is that the painting, which is special to me, was informed by six years of commuting across the Atlantic, not every day, but at least one return trip every month. Some of it I imagined, some of it came from looking out of the plane’s windows, all of it derived from a love of painting. So, yes, it is autobiographical, but, more importantly, it is a celebration of the craft of painting.

JMcK: Can you explain what motivated your small book, Eleven Pictures You Cannot Paint?

SF: A frustration with the art market and a need to better understand why I bothered to paint. It worked. I wrote it and got it published, then gave up bothering about the marketplace.

JMcK: Process and drawing are almost interchangeable in a research context at the present time. What aspects of drawing enable us to understand the creative process?

SF: Drawings that are made with a view towards discovery, I am sure, tell us something about creativity: the problem is that we find them difficult to “read”. The game, the art, the challenge, is, I suspect, to keep drawing, writing and talking, until we understand the creative processes better. They are both the new and old frontier. 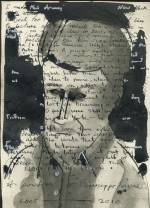