Rose Blake: ‘I have always found it easier to express a thought through a picture rather than words’

Rose Blake: ‘I have always found it easier to express a thought through a picture rather than words’

The illustrator and artist talks about her recent exhibition at the Rebecca Hossack Gallery, drawing by hand and directly into the computer, the perils of being freelance – and why being Peter Blake’s daughter can be embarrassing

Rose Blake’s recent solo exhibition Now I Am an Artist, at the Rebecca Hossack Gallery in London (7-31 October 2015), challenges the traditional divide between fine art and design. Underpinned by drawing, the works of Blake (b1987) also embrace digital media and printmaking, enabling her to traverse the commercial design world with commissions including the New Yorker,the New York Times, the Sunday Times Magazine, the Guardian and Google Creative Lab, and her own painting.

Janet McKenzie: Fine art and design have traditionally been separate areas of creative practice, in the west, at least. Where did you train, and who were your most influential teachers?

Rose Blake: I did a foundation course and then a BA in illustration and animation at Kingston University, followed by an MA in communication art and design at the Royal College of Art in 2011. We had a great teacher on foundation called Rebecca Davies, who really inspired us all. On degree, Geoff Grandfield, who was great, led our course and we used to have a really good programme of guest lectures every week.

JMcK: In Japan, art and design are integrated and more fluid activities. Have you been influenced by an eastern aesthetic or approach to art-making?

RB: Not really. Although, recently, I’ve discovered a lot more about Indian outsider art. I love the Gond style.

JMcK: Drawing underpins your work, but you embrace digital techniques as well. How does drawing enable you to explore ideas?

RB: ­For me, drawing is the most succinct and direct form of communication. I have always found it much easier to express a thought through a picture rather than words. In terms of the digital side of things, I pretty much draw into the computer, so it’s still drawing, just with a digital pencil instead of a wooden one.

JMcK: Can you explain the methods employed in your recent work as opposed to a strictly commercial project?

RB: Well, the work for the show was a mixture of drawing, translated to a print and then finished by hand, with collage, ink or paint. So all the artworks in the gallery scenes are handmade on top of the print. Commercially, my work normally has to be mass reproduced, so I normally just draw it into the computer, and then it’s easy to manipulate.

JMcK:Your exhibition Now I Am an Artist uses the museum as the stage on which to address the traditional hierarchy in the arts. Can you explain how you felt it necessary to make this shift?

RB: The idea came from the fact that, when I was offered this show, I was really daunted by the idea! It’s normally quite a tough job to show illustration in its best light in a fine art setting. So I decided to make lots of smaller galleries within the pictures – in a way, it was lots of little shows within a show. I suppose, traditionally, hierarchically us illustrators are at the bottom of the pile. I generally spend most of my time freelancing, and it’s often really hard to find a second to think about my own voice, as I am constantly working to different, overlapping deadlines. I really needed to take some time and try to make a solid body of work.

JMcK: You are clearly making your own career, but your father, Sir Peter Blake, as an important pop artist from as early as the 1950s, must have exerted an influence on your development. What do you consider you learned when you were growing up, from his practice, where imagery from everyday life and mass media was incorporated in painting and thus extended the boundaries of art?

RB: When I was about seven, he was making a series called Memories of Place, where he would pick up small objects that he found in the street and then make a collage using only those materials. We were on holiday in Paris (in the Tuileries Garden), and he was bent over picking up pieces of rubbish from the floor. I found it incredibly embarrassing at the time – but when I saw the actual collage assembled it made me realise that the day will always be remembered in that picture.

I suppose the main thing that I learned from him when I was growing up was that to do this for a living you have to be an obsessive … to be constantly on the look out for ideas. Also, I’ve personally learned to be generous with my work.

JMcK: Works such as Three Fingers/The Stolen Daffodil (2015) have the spatial quality of David Hockney’s early work. And in the museum works, you include Matisse- and Miro-like images. Which artists from the past have influenced you most?

JMcK:Which contemporary artists are most important to you as a young artist?

RB: I love Danny Fox’s paintings – they seem really rooted in the everyday, but there is something so off-kilter and strange about them. I love Peter McDonald’s colour. Rose Wylie is incredible: her recent paintings look as if they have been done by someone in their 20s. Derek Boshier is still making amazing drawings. Jonas Wood’s latest show at the Gagosian Gallery in London blew me away – the scale was incredible ... a 30ft painting of a simple vase of flowers. Humphrey Ocean’s paintings are beautifully understated. I love Joe Tilson’s work. And Jockum Nordström’s show this year was great.

JMcK: Music is an important aspect of your creative life. Can you explain how it influences your visual practice?

RB: I listen to music all day at work, quite obsessively, really. I suppose it doesn’t directly influence my visual practice, but it definitely keeps me going.

JMcK: What are you working on at present?

RB: I’m having a show with Rebecca Hossack next October in New York. I’m also working on two children’s books and keeping up my freelance illustration practice! 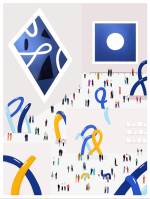