What defines the British national character? The British Line, an exhibition at the Robin Katz gallery of monochrome drawings by some of the greatest British artists from the 20th century to today, hopes to answer that question

The British Line is an exhibition of monochrome drawings across mediums – works that, together, capture the characteristics associated with British artists. Peter Blake and Michael Landy approach portraiture with studied familiarity, Edward Burra and Powys Arthur Evans explore British history, while Bridget Riley and Bob Law use the medium of the line for the contemplative and abstract. Curator Emma Cousin finds something revealing in the works, describing the vulnerable quality of seeing a pencilled patch of canvas in an unfinished oil paintings. A poem by artist Stephen Farthing, titled Withdrawing, opens the catalogue. He humorously describes the potential of the drawn line beyond its basic use for language and communication, a line that has a sense of humour and a personality, like the artists included in the exhibition.

Lucian Freud’s pen and ink drawing on paper, Untitled (Interior drawing, The owl), 1945, shows a taxidermied owl inside a glass box on a wooden chair with a basket-woven seat. Cousin describes this work as the catalyst for the show. That it is a still life and a drawing – a contrast to the impasto portraits for which he is known – is revealing: the drawing allows us to see him in a different state of mind, alone in the studio.

The works in the exhibition span the years from 1929 to 2014, forming an alternative timeline of modern British history. In 1929, Burra captured a scene at East India Dock Road in London: with a thin, light line, he drew layers of commerce within British society. Moving forward, the year 1945 was a momentous one.  It also marked the end of the second world war, and in July Winston Churchill, who had been prime minister and coalition leader throughout the war, resigned when the Conservatives were defeated in the general election A work by Evans shows Churchill, one of Britain’s great political personalities, his body filling to the edge of the frame, hands planted on his solid form, eyes downcast and nose upturned.

Two drawings by the Scottish-born Eduardo Paolozzi are hung beside each other to show the playfully contrasting capabilities of drawing. Collage (1951) is a mixed media piece, which deconstructs the line into an abstract work. Beside it, a single pencil line naively traces the soles of Paolozzi’s shoes in My Shoe Soles (1966), a drawing made for author Clive Barker. It is a form of abstract portraiture, like the pencil markings on a wall as a child grows, or a fingerprint. Innocence echoes in Roger Hilton’s graphite drawing of a cow on a hill, the cow’s humorous squiggle of a tail drawn with free-spirited spontaneity.

Drawing is a useful tool for portraiture, often capturing an essence of a person, rather than their exact appearance. Blake’s The Student from 1967, a thin ink line drawn on paper that wobbles and forms like the developing identity of the student. Landy, on the other hand, scrutinises his subjects – himself and his wife Gillian Wearing – works which Cousin describes as “spooky and interrogating”. Drawn with the thin line of a soft pencil, the two faces are irregularly placed on their pages like a sketch, but the line has the precision of a diagram. David Bomberg’s Dinora (1937) is a woman’s face drawn with charcoal, her beauty lying in the thick sweeping line that sculpts her face. Similarly, Eric Gill’s Nude (1931) is sculpted from a classical tradition, taking on the dimensionality of a carving.

With a theme as broad as the British Line that encompassed British artists and drawings, Cousin had to set limits for herself and restricted the show to monochrome. Simple and direct, like the British sensibility, there is an overall balance of black and white across the exhibition, but many of the individual works are dominated by one or the other.

Law’s Black Drawing 1.2.72 (1972) is a monumental mass of graphite drawn on paper and mounted on canvas. Looking at the density of the work on the wall, the brittle, smoky texture of the graphite, almost weightless in the artist’s hand, is misleading, like a black hole in the solar system. The line becomes part of the process, accumulating the strength and pathos of an oil painting with time and repetition. Cousin tells me about Law’s experience climbing to the top of a hill, sitting on the grass and pushing his hands through the blades into the earth, which leads to a discussion of the existential quality of drawing. Diagram, study or a sketch, the medium of the line allows the viewer a certain intimacy with the artist who draws it. We can visualise the process, the journey prior reaching the end product, which is contemplative and often challenging.

In Riley’s Study for Static II (1966) small ellipses are scientifically placed across the white space of the page. They rotate at different angles, abstractly measuring a scientific theory like plotted points on a graph. Black ink meanders around organic forms in Shelagh Wakely’s As yet Unnamed – Drawings (1988-90). Microscopic sea minerals and shell-like formations aimlessly collect, floating in a sea of calico. Although abstract, white space defines the imaginative context of these works.

This exhibition comes at a time when British nationalism is being called into question. This year the Scottish referendum and debates on immigration have started to redefine British nationalism. While this exhibition is not about chronology or history, it brings together artists who have played, and continue to play, an important role in defining British identity. 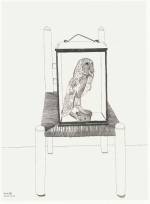 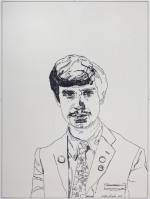 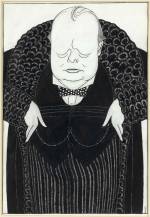 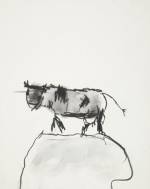 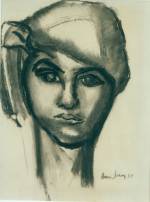 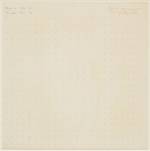 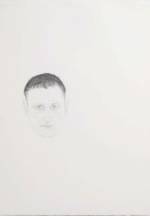 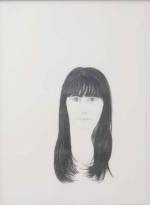 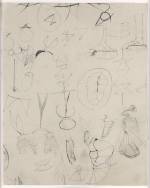