The exhibition running at the Guildhall Art Gallery in the City of London from 30 March-5 June 2006 is derived from key vantage points chosen by the artist around the River Thames. The gallery focuses on Victorian paintings and sculpture, and views of London from the 17th century to the present day. Over many years, Peter Spens has built up an admiring constituency of City-based collectors of his work, invariably established for a niche market developed by the artist. This focus on the financial centre of London might suggest that Spens locates himself in comfortable boardroom pitches, fit for the vanity of brokers and masters of the universe. But, in fact, he takes to the fire escapes and rooftops of the business areas to capture variations in light. Occasionally, he clambers down to the lower level of the roof of Canada House in Trafalgar Square to capture the frenzy of the winter rush hour.

The Director of the Guildhall Gallery, David Bradbury, has enthusiastically welcomed Peter to join a long tradition of painters and etchers of his territory, going back, as he rightly points out, to the meticulous depictions of Wenceslas Hollar (1607-77) in the 17th century. Peter Spens works in the longstanding Impressionist tradition of plein air in preference to working from photographs or memory, but applies a new interpretation, avoiding the old clichés. This gives a pervasive but yet an instant realism to the work. John Christian, historian and curator, sees Peter Spens' work as sui generis, unmistakably of the artist. 'A homogeneous network of brushstrokes' welded together as if by nature itself: the artist captures in this mesh not only buildings, but 'river, sky and reflections'. As the work evolves, the filling of the picture plane itself is seen to become more challenging and even more experimental. 'Night, South from 80 Strand' (2006) depicts an almost frenetic conjunction of fluorescent-like stabs of light, which are picked up where possible in staccato reflection: 'Hungerford Bridge' (2004) seems virtually motionless as viewed from the notorious Shell Building.

'Morning, South from 80 Strand' (2005) by contrast seems to anticipate the inevitable dealing room coffee break around 10.30 am on any uneventful day. The artist seems to capture mood as much as brilliant matter and water. 'Night, the City and St Paul's from 80 Strand' (2005) is celebratory, predicting the dealers' killing and their release from the computer strobes, to hive off from stress to a well-earned rave. In formal terms, the night scenes are the most abstracted works, which indicate a more emotional and intellectual involvement, a less descriptive remit. There is, too, much ground for celebration in this accomplished vindication of the artist's unwavering commitment to a well-rehearsed tradition of painting from across the Channel: Monet, Whistler, Degas, Derain. The large drawing, 'The City with the Gherkin Under Construction' (2004), perhaps partly a homage to Norman Foster, indicates gleefully how, for the future, the painter knows which way the City landscape is heading. About his earlier work (2001), Andrew Lambert wrote enthusiastically:

Peter Spens possesses a clean-eyed vision of the world, reflected through his bright optimistic even-tempered paintings. Refreshingly, his work evinces serious traditional values - one of its main strengths is the rigour and particularity of the draughtsmanship. The big ink drawings are utterly convincing, and it is this structural authority which underpins his work in other media.

Thirty paintings and drawings in the Guildhall exhibition chart the changing skyline around the Thames from the installation of the London Eye in 1999 to the present. Works have been borrowed from corporate and private collections, including those from companies who accommodated Spens as artist in residence and allowed him to use their buildings and offices as temporary studios. Night paintings and monotypes are among the most compelling works in the exhibition; the visual language achieves lift off through abstracted improvisation, underpinned by the bones of fine draughtsmanship. The artist has exhibited works dealing with other cityscapes, such as New York: but it seems that London demonstrably brings out his best skills. 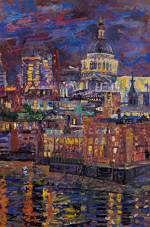 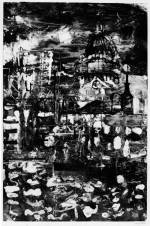