Brian Dawn Chalkley’s alter ego, Dawn, has sketched a world of androgynous figures with guns in seaside landscapes, on to pillowcases, in a continuing exploration of gender and sexuality 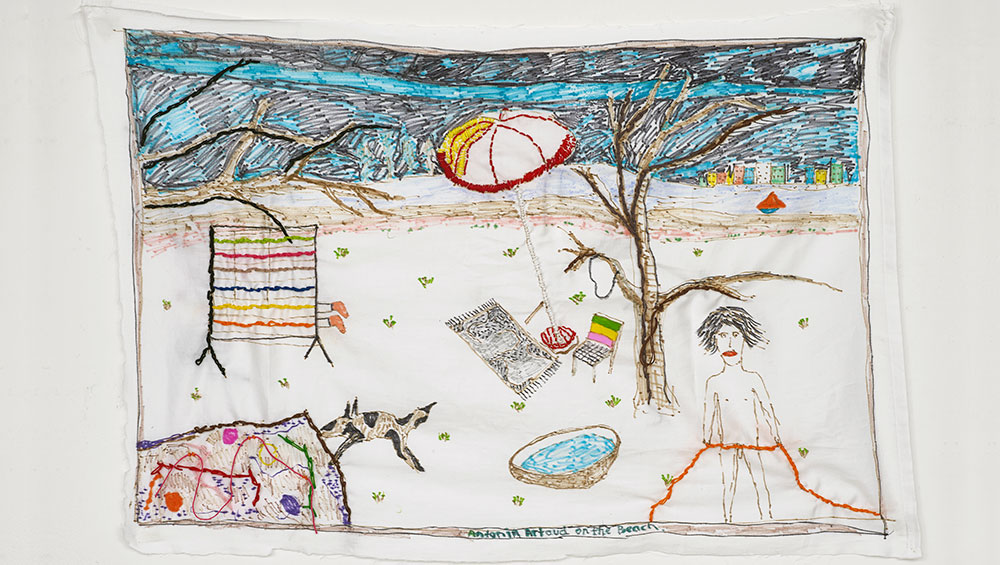 Now in his 70s, Brian Dawn Chalkley has been exploring gender, sexuality and identity for more than four decades, first in private and then in his art. Having started his career as a modernist painter, whilst a transvestite in private, in 1996 he embraced “Dawn”, his alter ego, into his public art practice, too. Ever since, this movement between “Brian” and “Dawn” has fuelled an odyssey into what it means to perform gender, and to form and reform identities, going far beyond the modernist tendencies of his earlier years, and continuing to build an impressive body of work that uses narrative and costume to construct and deconstruct aspects of their personality and personae.

In this second solo show with Lungley Gallery, it is Dawn Chalkley who has created a world sketched on to torn pillowcases, during this tumultuous year. Embellished with drawings, handwritten texts and embroidery, these works contain motifs familiar from earlier work – androgynous figures with guns and dresses, seemingly lost in natural wilderness. Appearing here, these characters, props and suggested stories create a sort of dreamscape, forming a recurrent set of subconscious motifs and sequences that prompt us to examine our own hidden dreams, fears and selves. 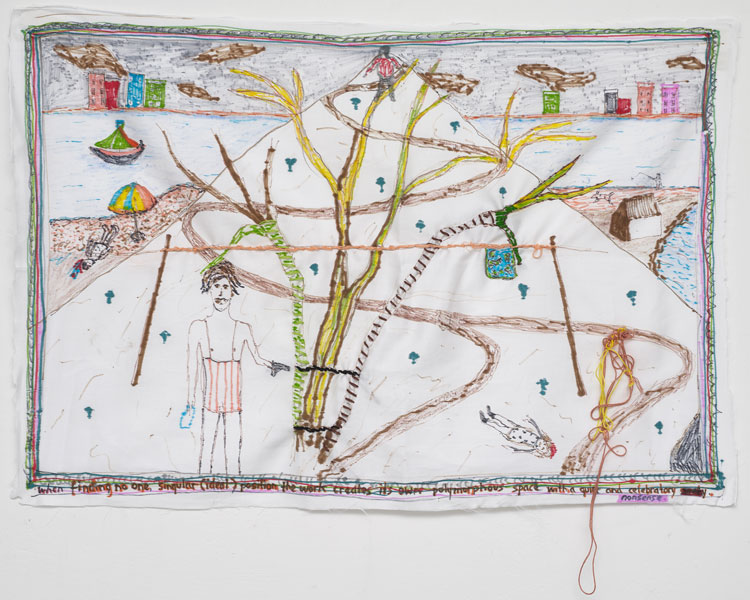 In Ideal (2020), for instance, an androgynous figure, wearing a 1920s-style striped bathing costume, shoots a gun at a much smaller, child-like figure, already bleeding on the ground, while a figure in red stands in the distance, on what could be the end of a pier or a road. In the middle of this drama, a leafless tree spreads out, connecting them despite the dissonance of the scene. Beyond this, there are little buildings, sea and a beach hut; it seems to evoke a British seaside town, perhaps memories from the artist’s own childhood, although laced with violence and horror. 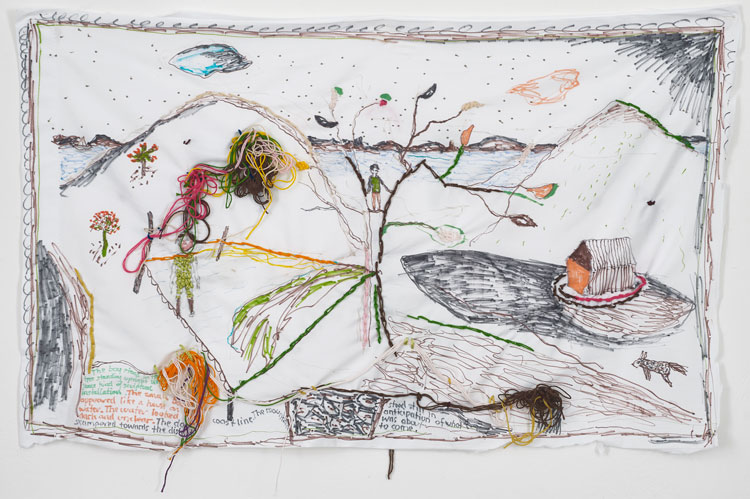 Brian Dawn Chalkley. Anticipation of what was about to come, 2020. Pencil, felt tip and thread on cotton pillow case, 75 cm x 45 cm.

In Anticipation of What Was to Come (2020), there is another eerie scene and another beach hut, with a tree – this time with a few leaves, between fenced off portions of land. What seems to be a washing line, represented here with embroidery thread in several colours knotted together, has grown wild and out of control. In felt tip pen, at the bottom, there is some text, but it does not clarify what is going on: “The boy stood in the tree standing upright, his stance kind of sculptural installation. The small boat appeared like a house on water. The water looked dark and unclear. The dog scampered towards the distant coastline …” This narration gives the impression of a dream sequence, the meaning buried in symbols, the trajectory unclear, and the atmosphere strange and bewitching.

In Antonin Artaud on the Beach (2020), the artist seems to mock the famous dramatist (though affectionately), depicting him in a seaside scene, complete with a parasol, beach towel, paddling pool and sun shade. Standing there, looking haunted but striking, Artaud’s presence points to a quiet, everyday absurdity, an unmistakable dissonance, underlined by the wild drama of the skies behind. 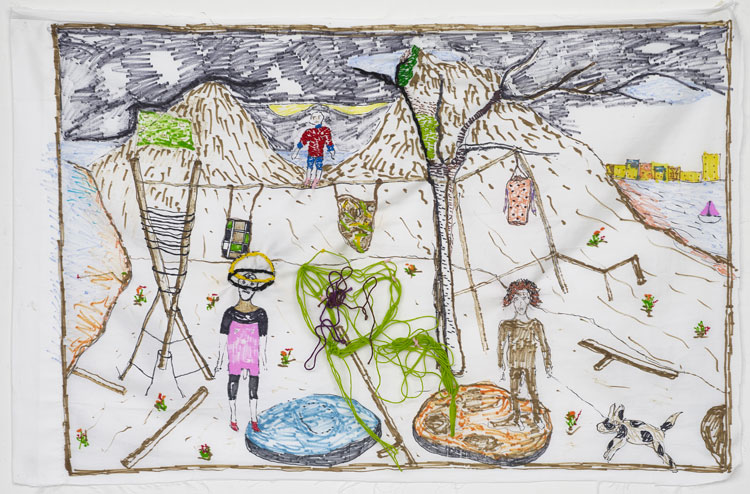 In all these visceral scenes, which take the British seaside – its pebble beaches and piers and sad, barren trees – as their setting, Chalkley conveys a sense of hopelessness, of existential dread. The complex, ambiguous identity of the figures standing there, often seeming lost in themselves – or their environments – is startling and also moving. It is impossible not to be drawn in, to empathise with these moments of surreal understanding, that the self, our memories, and our places are in flux.

But there is a chasm between the details of the stories, the narrative itself, and the meaning behind both. While we are invited to speculate on, and discover more about, these scenarios, they ultimately refuse to give more than these stark, dream-like symbols, and so refuse any true resolution. This sense of ambiguity – of static angst and quiet crisis – seems perfectly prescient for this year (also the year in which they were produced); Chalkley has drawn on a lifetime’s work and reflection on personal dissonance, contradiction, interiority and how we relate to our own memories and sense of self, to produce a series of works that cleverly and movingly process the strangeness of the times we are living through – both together and alone.

Chalkley’s earlier work is currently on show at the group exhibition Tales from the Colony Rooms: Art and Bohemia, London (until 20 December 2020), which features the work of Frank Auerbach, Francis Bacon, Bruce Bernard, Peter Blake, Michael Clark, John Deakin, Daniel Farson, Lucian Freud, Maggi Hambling, Nina Hamnett, RB Kitaj, Eduardo Paolozzi, Isabel Rawsthorne, FN Souza and many others – all of whom, in their heyday, frequented the Colony Rooms, a notorious private members club for writers and artists. This work gives some context to Chalkley’s wider practice, therefore, and indeed the artists of his generation and social circles, in Soho’s more bohemian days.