This exhibition of works by Richard Long from 1995 to 2014 documents the artist’s journeys through England, Switzerland and Antarctica. On the ground floor, Long brings slate rock and river mud into the gallery, and in the upper gallery, he provides windows into far-away locations through his photography and further mud works. Despite his adventures across the world, his work continues to follow a tried and tested path in assessing mankind’s connection with nature.

Long’s sculptural installation Four Ways (2014) sits centrally in the Lisson gallery’s wide-windowed, street-facing ground-floor gallery room. Rocks of Delabole slate from Cornwall are ordered regimentally into a cross shape on the floor. Natural light reflects off the flat edges of the rocks, picking out highlights among the dense, asteroid-grey colour. These imperfect objects are brought under control by Long, who organises them neatly so that they fall into line like skyscrapers in Manhattan. Their form manages to be craggy and irregular, yet also shapely and cut with precision; one side of the slate is always vertiginously levelled in a straight, smooth edge. Gravity pins these rocks to the gallery floor and their weight gives them strength and purpose in their articulation of shape. The title, Four Ways, refers to a shape that we recognise as a cross, but Long interprets it as four potential pathways, which could be taken by a traveller. Carved into nature by humans across the world, the cross shape is a basic communication. An “x” that marks the spot, a sign of danger, religion or even a signature; the cross lies at the root of language formation, understood across cultures, taking on multiple translations.

The exhibition is full of language in the form of Long’s text works where chosen words document his experiences with the land. The words allow the viewer to relate to the artist’s experiences on a deeper level, understanding materials, shapes and distances. Long manipulates the words into shapes on the wall, or places them strategically across photographs. Not quite poetry, the words occupy a space between appreciative description and topographic documentation of his journeys through the land. The meaning and formation of the words is paramount, as they are placed directly on to the wall in a temporary installation.

With No Direction Known Like A Rolling Stone (2013) is a pyramidal pile of words, including “aimless”, “irrational” and “freewheeling”, which describe a five-day walk on Dartmoor. Together, the words don’t form a sentence, but build a mood. Beyond God Romansch Walk (2013) is a group of words shaped like a diamond; a top triangle of bold text and a bottom triangle of normal text creating a diminuendo of words. The text describes a 16-day mountain walk in Switzerland. Another text work, Slate Granite Sandstone Limestone Chalk (2013), documents a 240-mile, eight-day walk from Cornwall to Oxfordshire. The title is a list of five materials that Long encountered on his walk. These texts works are like a shorthand or a sketch, perhaps initially scrawled on a notepad by the artist during an unpredictable journey through nature.

Making a mark on the landscape is just one of our desperate attempts as humans to feel heard within the immensity of nature. Using nature to make his mark, Long’s two large-scale untitled works in the exhibition, both made in 2014, are painted using mud from the banks of the river Avon in Bristol and white clay from Cornwall. The wet mud and clay has been wiped across linen and plywood, in a swirling pattern overflowing with spatters and flicks, which builds into two abstract blocks. The consistency is like a thick and dense paint, which traces back to our human urge to make a mark. Mud and clay from the earth was used by the earliest human civilisations for house-building, pottery and art. Long expresses this same need through his work. Upstairs, five smaller works on card are also made with mud from the River Avon. Made in 1995, 2005 and 2006, they demonstrate the continued presence of nature over time and also the constancy of Long’s practice. Long was born in Bristol and his return to the banks of the Avon is an acknowledgement of the artist’s intimacy with the land and his knowledge of the landscape.

In the upper galleries, a series of photographs overlaid with lines of text (2012-13) are exhibited. These works trace Long’s journeys to Engadine in the Swiss Alps and the Driscoll Glacier in Antarctica. A Camp on the Driscoll Glacier (2012) shows Long’s tiny red tent in a white expanse of snow. Long positions himself centrally, viewing himself within nature, like Caspar David Friedrich’s Wanderer Above the Sea of Fog, painted in 1818, aligning himself with other romantic wanderers from art history. He also intervenes with the scene by placing  a line of red text across the photograph. The landscapes are beautiful, with the subtle intervention of his artistic framing, but it is the text that adds another dimension to the image, guiding the viewer into the context of the journey Long has embarked on.

Considering that this is Long’s first solo show with the gallery in more than three decades, the work exhibited is somewhat underwhelming. Long only manages to show a particular character of the natural world in a few of the works: a red tent, the turquoise-blue skies and the rich, dense quality of slate in Four Ways are highlights that add focus and intensity to the work on show. The expression of language and communication, however, is more of an interesting thread to follow while viewing this exhibition. Long has used text carefully to puncture landscapes and the gallery itself, philosophically extending the journeys he articulates. 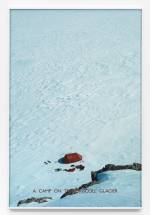 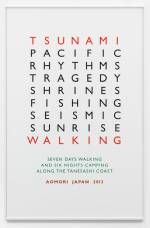