It may be a product of age or lack of funding and proper premises but, whatever the reason, Richard Demarco's activities during the most vibrant period of the Edinburgh Festival appear to be somewhat diminished. Perhaps when one comes to surveying Demarco's enormous record of achievement over the past 50 years or so, expectations are raised significantly so that by comparison with the heady days of Tadeusz Kantor's Cricot Theatre, masterclasses with Joseph Beuys and Buckminster Fuller, the Edinburgh Arts expeditions, the magnificence of the Polish 'Atelier 72' and literally hundreds of other exhibitions, happenings, events, performances, anything that is organised now seems somehow less and of diminished ambition.

Yet Demarco refuses to give up. Like many passionate actors, he will probably die on his feet 'on the boards' doing what he loves: organising, interjecting, acting as a catalyst and an inspiration. And so this year we are offered a selection of photographs and other artworks at the Robyn Rowles Gallery in Howe Street, a 'franchised' programme of theatre and visual art at the Roxy Art House in Roxburgh Street and a two-day symposium at Traquair House at Innerleithen in the Scottish Borders. A not insignificant programme which would satisfy most mortals, but a good deal less than we have come to expect of Professor Richard Demarco, CBE, Polish Gold Order of Merit (2008).

The majority of work at the Robyn Rowles Gallery comprised what Demarco now describes as 'event photography', a 'new' genre defined by '... a team of curators at The Museum Kunst Palast in Düsseldorf who collaborated, over a period of five years (2003-07), to make the first exhibition of 550 event photography art works'. Demarco explained that the exhibition was '... a celebration of the life and work of those artists who helped make Düsseldorf the nodal point in Europe for the development of the international spirit of the post-Second World War avant-garde … which involved many artists who helped build a cultural dialogue between Edinburgh and Düsseldorf. Among these artists were Joseph Beuys, Günther Uecker, Gerhard Richter, Blinky Palermo ad Daniel Spoerri.' The mention of such artists is important as it helps to contextualise some of Demarco's passions, concerns and activities during the 1970s - in the first year of that decade he was instrumental in organising the 'Strategy: Get Arts' exhibition at Edinburgh College of Art where these and many other artists showed their work to a British audience for the first time. The effect was nothing less than transformative as it played a major role in 'Europeanising' the previously staid and essentially inward-looking Scottish art scene. In a sense the reverberations of 'Strategy: Get Arts' can still be felt today.

Some of the events, artists and meetings from around this time can be seen at the Robyn Rowles Gallery and, never one to miss a trick, Demarco has now editioned these photographs as prints which he intends to limit to around 200. Each will be signed by Demarco and accompanied by a brief descriptive text. So, for between £150 and £250, it is possible to pick up images of Joseph Beuys, Tadeusz Kantor, Sean Connery, Jimmy Boyle, Jim Haynes and a host of others.

Notwithstanding the enormous scale of Demarco's photographic archive, Demarco's relationship to photography has received scant critical attention. The idea of a newly defined genre of 'event photography' is perhaps useful tool in helping to understand this relationship. Clearly, there is scope for more extensive treatment of the subject elsewhere; however, several salient points should be noted. Perhaps the most obvious of these is that all of the photographs were taken by Demarco himself. This positions him not only as an observer of the events which he was recording and documenting, but in many senses as a participant. These images are therefore a record not only of 'mere' events but also of the life of Demarco himself. The immense body of work is, therefore, in a very real sense a personal documentation and as such they should be read as an emotional record; the photographs express both feeling and thought in equal measure. They are a corollary to, and extension of, Demarco's sense not only as an initiator, catalyst and observer of such events but also as contributor; they stand therefore as an artistic statement as well as documentation. It is unlikely that the importance and value of such an extensive array of art historical record has yet been recognised. This increases the importance of the work being undertaken at the University of Dundee's Visual Research Centre which plans ultimately to make a section of the archive available publicly via a dedicated website.

One of Demarco's key historical relationships has been with Poland and he has visited the country more than 40 times since his first visit there in 1968, as well as having been awarded the 'Gloria Artis' Medal and the Polish Gold Order of Merit for services to Polish culture. Aspects of this relationship, as well as the significance of the Rule of Saint Benedict and its influence on European civilisation, were addressed at a two-day seminar at Traquair House, historic seat of the Maxwell Stuarts, in the Scottish Borders. These were two enormous themes and such a short space of time allowed only fragmentary aspects of the complex issues involved to be addressed.

Introducing the seminar, Catherine Maxwell Stuart, Laird of Traquair, noted that, in 1548, Traquair was sold to the Stuart family; the house was originally a defence tower but was converted to domestic use for the Catholic Jacobite Stuarts. The keynote lecture was given by Right Reverend Dom Aidan Bellenger OSB, Abbot of Downside Abbey, who discussed the Roman roots of the Benedictines (St Benedict lived from 480 to 550 AD). Benedict and his sister, St Scholastica, are both buried at Monte Cassino. St Benedict's teaching allowed his monks real choices and some of its basic tenets include stability and permanence, conversion, and obedience, including a readiness to listen - qualities which, according to Dom Bellenger, are being lost in today's world.

In Scotland there are three flourishing Benedictine centres - at Dunfermline, Pluscardine and Fort Augustus - which focus on the preservation of classical texts and ancient ceremonies.

Professor John Haldane of the University of St Andrews discussed the founding of the Benedictine Monastery at Monte Cassino and the idea that it represented 'light in the midst of chaos' - a reference to Monte Cassino's history as a place of learning and as a centre for the arts. Professor Haldane believes that the legacy of St Benedict is an intellectual challenge to use the advances of the Enlightenment and the sciences and incorporate these as part of an ultimate proof of God's being. Such pursuits and the 'rescue of Christianity' - according to Professor Haldane - are part of the aim of the present pontiff, who also bears Benedict's name. Professor Haldane cites the Regensburg address of Benedict XVI which had, Professor Haldane believes, as its central thesis the claim that Christianity, as opposed to Islam or Judaism, follows texts which are based on pure logos or reason.

Patrick Reyntiens, a stained glass artist and former Director of the Central School of Art in London, spoke of Traquair's gift to humanity in leading the way, after the Second World War, to the rebirth of hope. Reyntiens discussed his hope for a Scottish-Polish future and drew parallels with the Anastasia movement in Russia (a 'New Age' cult based on the reverence of nature) which has led in turn to practical regenerative projects such as the restoration of historic dachas.

The author Nicholas Fogg, who has written a study of the history of Stratford-upon-Avon as an Elizabethan township which nurtured the young William Shakespeare, spoke of the proportionality inherent in the architecture of Traquair and the literary structures of Shakespeare.

The issues addressed on the following day, which drew links between Scotland and Poland, were equally fascinating and eclectic. Krzysztof Noworyta of the National Centre for Culture in Warsaw and the Lódz-Edinburgh Foundation gave an interesting if curtailed talk on the historic links between Scotland and Poland, drawing in particular on military and commercial links between the two nations. Gemma Bentley, former Director of Polish Art Scotland, has curated several exhibitions dedicated to the work of Polish artists resident in Scotland. The recent show, entitled 'Razem: New Polish Art and Design in Scotland' could be seen at the Roxy Art House and includes work by 11 Polish artists.

Ms Bentley discussed the origins of her involvement with Polish artists in Scotland and pointed out that many talented, trained artists were here working in low-wage jobs. Following an advertisement she placed on a website asking for submissions for a proposed exhibition she received an overwhelming response. The project to show work by Scottish-based Polish artists gathered momentum from there.

The recent show displayed a diverse range of work from the sculptural glass of Goshka Biatek to the site-specific installations of Domino Pateman and Barbara Mróz. Of note, in particular, are the fine, delicate watercolours of Aleksandra Zawada. The works appear innocent, capturing female figures in apparent repose; in fact, the images are derived from police archive photographs of crime scenes. The tension between the apparent subject matter and the reality is what lends these images such force.

Although not directly organised by Demarco, Razem (and initiatives like it) owe him a moral debt of gratitude for providing the context and platform for such events to unfold.

Is it too much to hope that Demarco's still prodigious energy and his precious legacy of innovation and catalytic force will be with us still in years to come?

The author is indebted to Alison Linklater who attended the seminar on 10th August which addressed the Rule of St Benedict, and who provided notes on which part of this article is based. 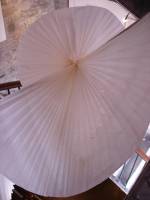 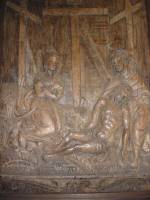