This exhibition, which presents many canonical works from 1920s and 30s Russia from public and private collections in the west, makes clear that creativity, beauty and innovation can be put at the service of fear and repression

The exhibition of early Soviet photography and film at the Jewish Museum is the latest of many that have proliferated in the US and elsewhere since the early 1990s. Almost 30 years have passed since perestroika opened the gates of the closely guarded ideological status quo of the former Soviet Union, making images, documents and other sources on revolutionary and early Soviet art newly available for study and public display in virtually every locale that has had interest in this theme, including the countries of the former Soviet Union, Eastern Europe, Latin America, Asia and the west. Photography and film formed an important part of this previously inaccessible treasure trove of works that inaugurated the communist modernity. When I say “newly discovered”, I mean by the general public. A select group of artists and connoisseurs were familiar with the photographs of Alexander Rodchenko, El Lissitzky, Boris Ignatovich, Max Alpert and Arkady Shaikhet from the famous Film und Foto exhibition held in 1929 in Stuttgart. Interested individuals could find places to watch Soviet silent films in New York throughout the cold war era. However, it was only after perestroika and the fall of the Berlin Wall that the Soviet avant garde came into the field of vision of major art institutions. In 1992, the Guggenheim was among the first museums in the United States to include a large section devoted to early Soviet photography in its blockbuster show The Great Utopia: The Russian and Soviet Avant-Garde 1915-1932. This exhibition introduced the American public to such important figures in the history of Soviet photography as Eleazar Langman and Georgy Petrusov, as well as graphic artists Gustav Klutsis, Valentina Kulagina and Georgy and Vladimir Stenberg. A catalogue essay (and later a book) by Margarita Tupitsyn delineated major trends, groupings and debates within the landscape of early Soviet photography, defining it stylistically and methodologically. The exhibition and the book laid the groundwork for several scholarly and museum-based interventions into the early Soviet photography from the early 90s to the present time.

How is the current exhibition in the Jewish Museum, just two blocks away from the Guggenheim, different from its predecessors? Apart from drawing our attention to the fact that many of the leading Soviet photographers and filmmakers had Jewish roots, symbolically it closes an era of hope, openness and cultural exchange brought about by perestroika. Whereas The Great Utopia was fertile ground for new interpretations and discoveries, revealing to us photographic images from former Soviet museums and archives, many of them for the first time, The Power of Pictures presents a well-considered and comprehensive approach to what has become a canon of Soviet photography, film and graphic design over the past two decades. The curators, Susan Tumarkin Goodman and Jens Hoffmann, have filled the halls with works entirely from western collections, with no loans from the countries of the former Soviet Union. This limitation is due, no doubt, to a recent freeze in cultural exchanges between the US and Russia, but for an exhibition that aspires to be relevant to our life today, the rise of conservative and nationalistic currents in Russia reminds us of the totalising and brutal character of a state that sponsored groundbreaking photography and film. The first thought that the show brings to mind is that creativity, beauty and innovation can be put at the service of fear and repression.

The display greets us with portraits of photographers and film-makers whose works are included in the show. Many of them are, indeed, Jewish. The introductory text spells out the exhibition’s main idea, which is the exploration of the relationship between art and politics, and reminds us that art’s presence in politics remains a “matter of urgency”. The reasoning for this assertion is not clear, however, because the thematic arrangement of the show is sufficiently removed in time and space from us to make any correspondences between the use of photography in Soviet Russia of the 20s and 30s and the relationship of art to our political reality somewhat tenuous. Carefully outlined divisions between various social endeavours of a young Soviet state documented by photographers nearly a century ago find little parallel in today’s US or the world at large. The eight thematic sections, comprising more than 170 works, tell us about staging happiness, physical culture, military, Soviets, constructing socialism, metropolis, new perspectives and films and posters. While the images pertaining to these sections were bold and powerful for their time – introducing such now-classic devices as foreshortened perspective, extreme points of view, innovative framing, photograms, and photomontages – all of them were used by what proved to be a repressive totalitarian regime that tried to maintain its grip on the lives of people who fed the nomenklatura. Several images in the exhibition entered the photographic canon of modernism. Lissitzky’s photograms, Rodchenko’s views from above and below, his portrait of his mother, Georgy Petrusov’s superimposed double-portrait of Rodchenko and Shaikhet’s Lenin’s Light Bulb, Peasants Turn on the Electricity for the First Time have become part of the official history of the period. A little less known are Yakov Khalip’s and Max Penson’s depictions of industrialised production, Olga Ignatovich’s cityscapes and sport competitions, and Georgy Zelma’s experiments with photograms. These photographers were, nonetheless, no less remarkable in the way they used the camera to capture the moments of Soviet life that made it appear enticing and rich with possibilities.

The curators made an excellent decision to display printed matter – books and journals – alongside the photographs, demonstrating first-hand the use of photography in mass media. Issues of Lef and Novyi Lef with Rodchenko’s covers from 1923 and 1928, Lissitzky’s Catalogue of the Soviet Pavilion at the International Pressa Exhibition (1928) and Rodchenko and Varvara Stepanova’s albums dedicated to the reconstruction of Moscow (in 1938 and 1939), The Red Army and Navy (1939) and Soviet Women (1939), among others. are all familiar, but nonetheless striking in their inspired use of graphic image as a tool for political propaganda. The poster design section also contains canonical images. The stark juxtapositions of graphic elements, bold colours, text and image marked the style associated with the names of such masters of graphic design as Vladimir and Georgy Stenberg, Anton Lavinsky, Anatoly Belsky, Rodchenko and others. The film programme, shown daily and on Thursday evenings, contains classics of the early Soviet period, including Dziga Vertov’s Man with a Movie Camera (1929), Vsevolod Pudovkin’s Mother (1926) and Esfir Shub’s The Fall of the Romanov Dynasty (1927). Some films advertised in the posters on display are screened in the adjacent room. It is a curious exercise to compare four different posters for Sergei Eisenstein’s Battleship Potemkin – one each by Lavinsky and by the Stenberg brothers and two by Rodchenko – and then see the actual film. The strongest aspect of the exhibition is its ability to integrate the media, tracing connections between photographs and film on one hand and graphic design on the other. As part of this impressive integrative approach, curators included the tools with which most images in the exhibition were made – Leica and FED cameras used by photographers and a 35mm Debrie Parvo film camera featured in Vertov’s Man with a Movie Camera.

As far as Jewishness ois concerned, the exhibition fails to convince us of the importance of Jewish identity for people who carried Jewish names. This failure comes from the fact that neither the texts nor the display reveal what constituted this identity – the artists’ names, their striving for collectivisation, self-identification, religious practice, or something else. The section on Soviets is an exception. There, we learn from a wall text that Penson, Zelma, Shaikhet and other Jewish artists were attracted to the Soviets because of a promise of ethnic and racial liberation, hinting that their Jewish identity was tied to ethnicity. If the curators had chosen to explore this suggestion further, they could have written a new page in the history of early Soviet photography and film instead of producing a competent, but stale exhibition. 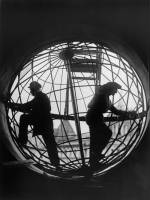 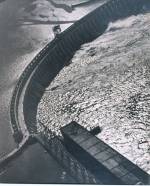 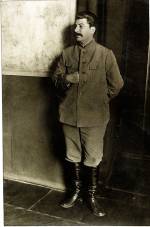 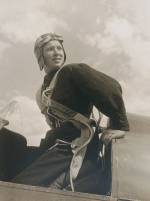 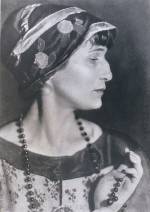 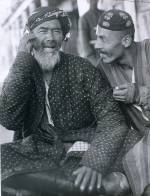 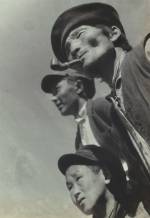 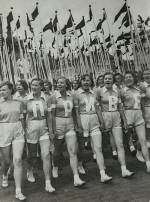 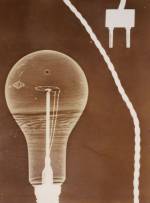 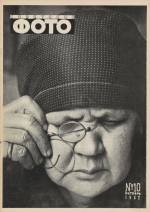 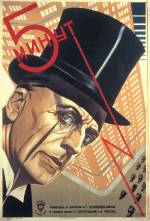 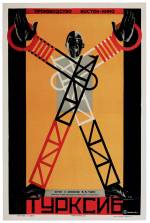