From Duchamp’s Travelling Sculpture to a tiny work by Ruth Asawa, Suspension proposes a new category within the story of modern sculpture 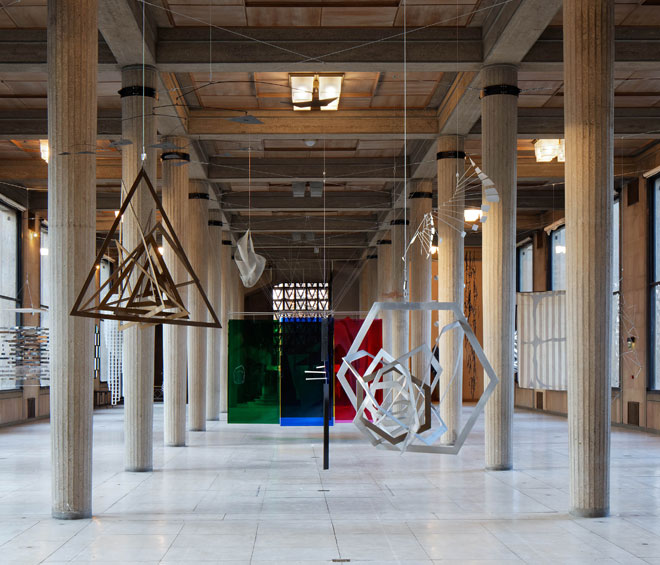 Suspension: A History of Abstract Hanging Sculpture is a stimulating and dramatic exhibition at the Palais d’Iéna, Paris. Surveying a century of abstract sculpture from 1918 to the present, all the works shown are suspended in the air, more often than not above head height. In his accompanying book, Suspension, the curator Matthieu Poirier argues that “suspended” or “ungrounded” sculpture constitutes a previously under-acknowledged genre within the story of modern art. His longstanding research suggests that both publication and exhibition are the first to be dedicated to the subject.

For Poirier, suspended sculpture should be considered independently from the more established categories with which it intersects. He is particularly keen to distinguish it from kinetic art, of which it is often treated as a sub-section, and also to show the diversity of artists and approaches involved. Alexander Calder has attracted a lot of attention in recent years: here he appears a small, if still significant, part of a complex and contradictory field. A longer-running supplementary exhibition is on in the much more intimate London gallery of Olivier Malingue, the dealer who is supporting the project.

More than 30 sculptures fill the length of the hypostyle hall in the Palais d’Iéna, a government building designed by Auguste Perret, with his part of the scheme completed between 1937 and 1946. The sculptures hang from a complex and irregular spider’s web of cables stretched between the room’s high walls and the tops of its imposing double row of Egyptian-inspired columns. Perret’s monumental and austere architecture feels, for the most part, alien to the groundlessness common to all the exhibits, and to the airiness, mobility and spatial independence found in many of them. At the same time, the hall’s height and, more importantly, the shifting sunlight and changing views coming through its large windows play a vital role in bringing the artworks to life. 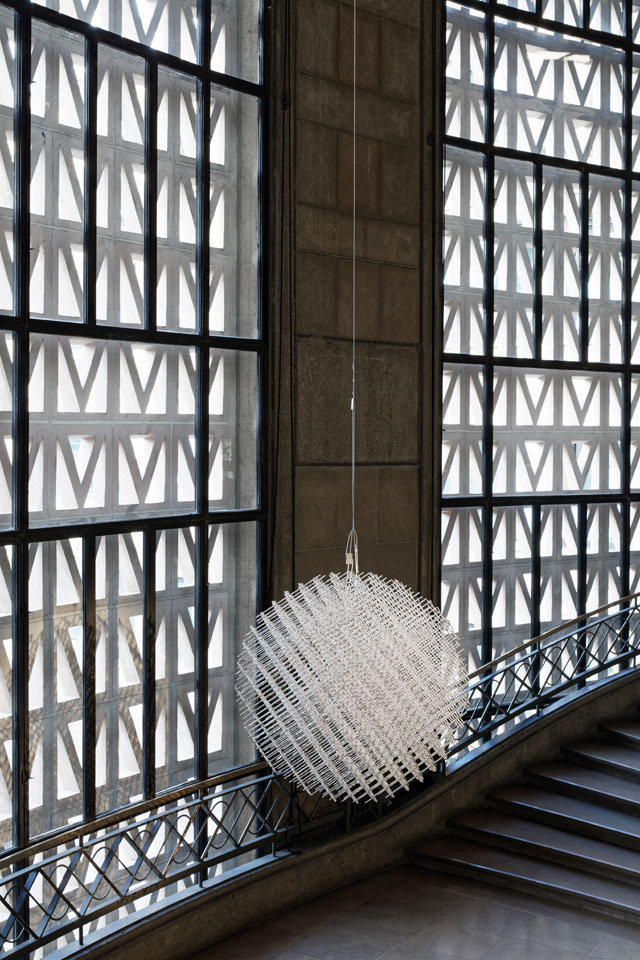 The one true moment of synergy between sculpture and architecture comes with the suspension of François Morellet’s Sphère-Trame (Sphere-Weft), 1962, above the landing of Perret’s grand staircase. Morellet’s is the only work shown outside the main hall. A single cantilevered staircase rises from the ground floor, splitting halfway up into two sweeping curves. Light comes into the staircase through a double screen, the outer face of which consists of a design of isosceles triangles set in rectangular frames. The fragmented pattern of light and shade projected on to the inner window finds a perfect complement in the reflective aluminium framework of Morellet’s sphere. As one open, fractured and geometric structure lights another, sculpture and architecture appear almost completely fused. The staircase is where Perret’s building takes off from the ground and hangs suspended. Its paired curves offer an image of flight and release from the ground that goes beyond the quotidian transit of bureaucrats from one floor to another – the suspension of Sphère-Trame feeds off and amplifies an image latent within the building that surrounds it.

The exhibition proceeds along the hypostyle hall in broadly chronological order. The earliest work is Marcel Duchamp’s Travelling Sculpture (1918), one of a number of reconstructions shown, and one of those made specially for the exhibition. Consisting of scraps from brightly coloured rubber swimming caps and originally strung up in Duchamp’s apartment in Buenos Aires, it is an elusive thing. A kind of patchwork ghost, it curiously, and rather abjectly, pre-figures Matisse’s Cut-Outs from later in the century. Man Ray’s Obstruction (1920) is an assemblage of coathangers. Hung high up, it can no longer obstruct the viewer, as its title suggests, although this undoubtedly strengthens the rather weak pun Man Ray makes between the hangers and a flock of birds. 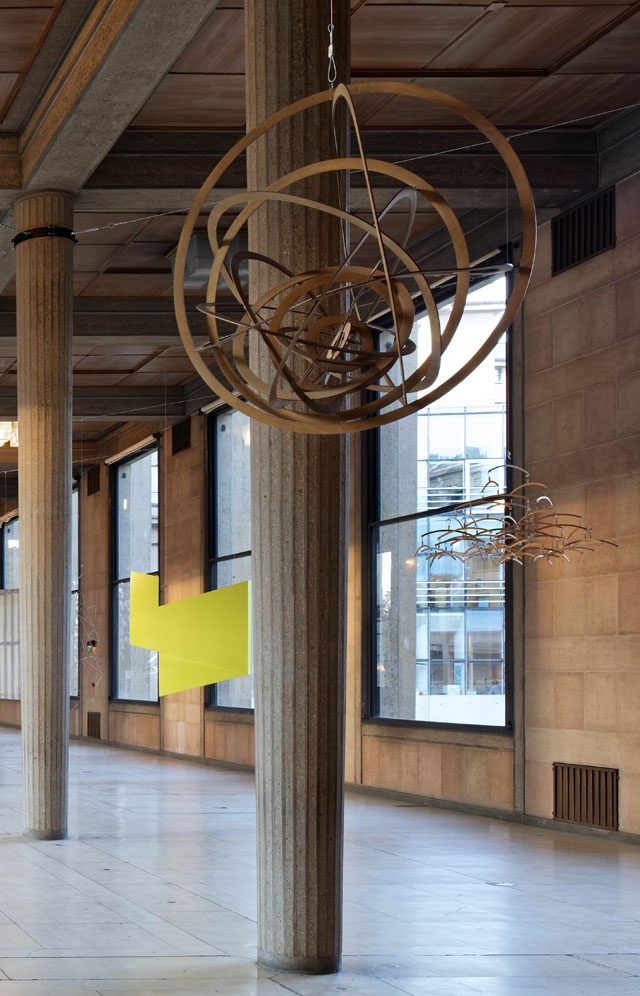 Between Duchamp and Man Ray are a trio of constructions by Alexander Rodchenko. They have a concentrated energy that is not quite matched elsewhere in the exhibition. Rodchenko’s constructions seem to me directly related to the Eiffel Tower, visible from one of the hall’s windows. They continue the tower’s dynamism, its sense of solid matter stripped down to essential force. The upward thrust of the tower symbolised the potential for technology to liberate humanity from the limitations of the ground, and so from nature in general. Rodchenko operates in the space the tower had pointed towards three decades earlier. For Poirier, the constructions “repeat the cosmogonic spiral and gyroscopic form representing the orbit of the heavens”. Part of the power of the group – and the Eiffel Tower before them – is that their undeniable symbolism is met by a matter-of-fact materiality and a strong abstract structure.

Poirier sees the works by Duchamp, Man Ray and Rodchenko as the beginning of suspended sculpture. His book disqualifies Vladimir Tatlin’s Corner Reliefs of 1915 as too dependent on the walls they are attached to and shown against. Those of Duchamp’s Readymades that were hung from the ceiling are also rejected as not “abstract”, although, given the inclusion of Man Ray and the resonance works such as Bottle Rack have with later abstract sculpture, this is perhaps up for debate. But beyond this quibbling over dates, opening the exhibition with Duchamp, Man Ray and Rodchenko shows the complexity of the story Poirier wants to tell, one that runs through the whole exhibition. This is both its great strength, and perhaps its weakness. 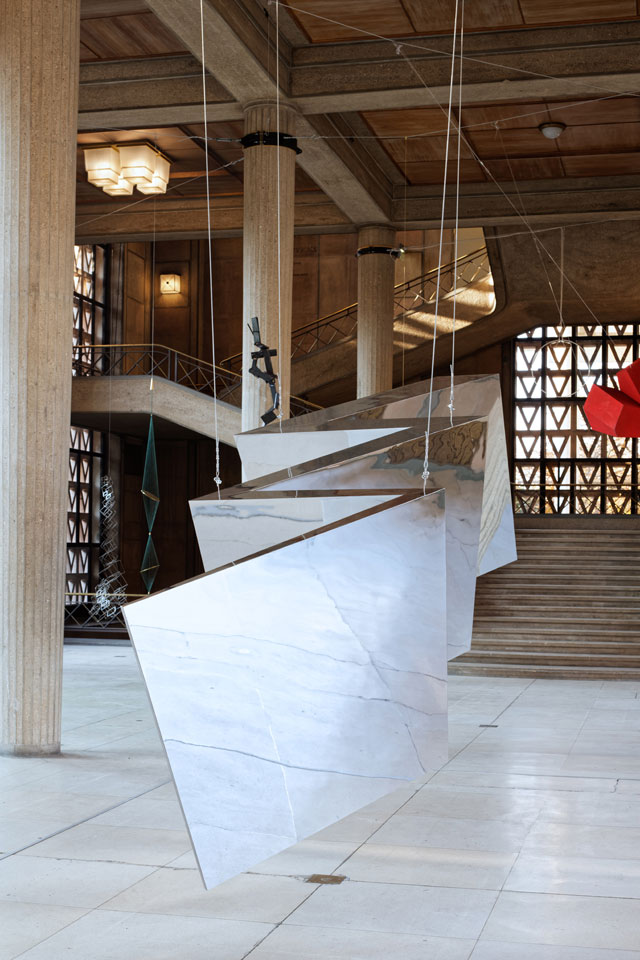 Poirier’s enthusiasm and curiosity opens up an alternative history of abstract sculpture, showing the great range of uses to which abstraction has been put. His book provides much food for thought. It illustrates many works not included in the exhibition and collects intriguing quotations from the artists. For Calder: “Mobiles can be monumental.” Jesús Rafael Soto believed: “We are in the world as fish are in water … there are no spectators any more, there are only participants.” Max Bill thought Georges Vantongerloo’s hanging constructions resembled “found objects from a distant world”. For Louise Bourgeois: “Horizontality is a desire to give up, to sleep. Verticality is an attempt to escape. Hanging and floating are states of ambivalence.” Yet I was not completely convinced by Poirier’s attempts to draw general conclusions from the heterogeneity he is obviously fascinated by. The exhibition itself cannot quite tell a coherent narrative; or rather, it struggles to convincingly thread together the competing narratives it contains. The project is clearly already very ambitious, but does Poirier need an even larger arena in which to explore his theme? 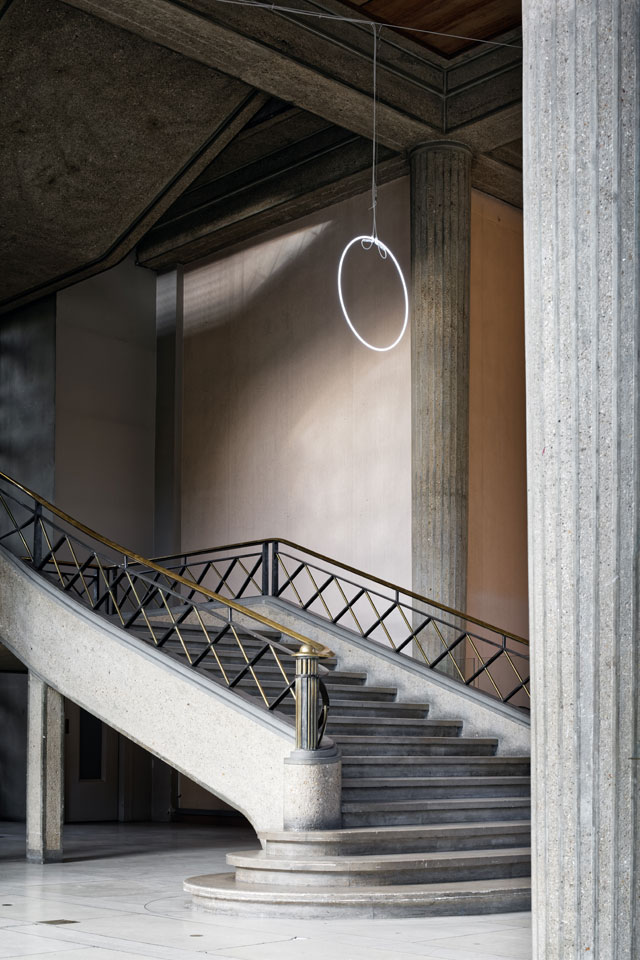 It seems incontestable that much of this work is engaged with a desire to go beyond, as Poirier puts it, “nature and mimesis to become aerial, atmospheric, or even cosmic”. But is this a useful explanation of the works shown here by Daniel Buren, Bourgeois, Hans Haacke, Man Ray, Haegue Yang, Olafur Eliasson or Robert Morris? If one wanted to more fully explore the movement of abstract art toward the “aerial, atmospheric or cosmic” – and doesn’t that have the potential to be an exhilarating exhibition? – wouldn’t it make more sense to also include paintings that stayed on the wall, and sculptures that remained on the floor, even as they aspired to leave these restrictions behind, or provided a blueprint for doing so? Selecting only works that do not touch the floor is an eye-catching premise, conceptually and visually laying down a marker for others to respond to. But for me, for example, certain 1960s sculptures by David Smith or Anthony Caro more compellingly explore suspension, and the movement away from the ground, than, say, the literalisation of their example at the heart of Joel Shapiro’s art.

Raising these questions is part of responding seriously to Poirier’s work but, at the same time, they do feel rather churlish. There is a lot here to enjoy. I was especially struck by the relationship between suspension, making and drawing in the works by Gego, Leonor Antunes and Ruth Asawa, particularly when contrasted against those by Soto, Carlos Cruz-Diez, Julio Le Parc and Christian Megert, which, although they have their own beauty, abjure any evidence of the maker’s hand. A number of works in Suspension project a rhetoric of openness, but, in reality, feel rather static, limited in scope – some of these seemed restricted by the cables from which they are hung, that is, by the very thing that was meant to liberate their forms. In contrast, Asawa’s tiny sculpture Untitled (S.2005, Hanging Open Five Petaled Form) (c1966) occupies space with quiet determination, and appears to flow naturally from the wire on which it is hung. With only very limited means, Asawa is able to make potent the difference between occupied and open space, between air and matter, between being and non-being. The crafted nature of her work is central to the manner in which it grips space, with a repetition that avoids monotony. Its presence is not diminished by the much larger works shown nearby. Particularly successful is the way in which she merges an abstract and an evocative image, just one of the ways in which her work resembles that of Constantin Brâncuși. Asawa’s work was, for me, the most exciting individual work in the exhibition. But more important are the multiple questions raised in Suspension’s proposal of a new category within the story of modern sculpture. 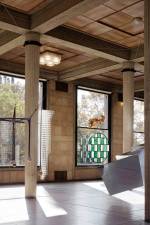