Strangely absent from most histories of Pop and Conceptualism, Elaine Sturtevant’s work is significant for the understanding of both movements. Born in Lakewood, Ohio, and based in Paris since the 1990s, Sturtevant has been remaking the works of other artists since the 60s, including that of Joseph Beuys, Andy Warhol, Marcel Duchamp and Roy Lichtenstein, and it is this multiple appropriation for which she is known. Her first exhibitions in New York in 1965 included replicas of Andy Warhol’s flower paintings. Sturtevant asked to borrow the screens, Warhol consented. In a game of chase, Warhol, when asked about his work, would reply: “Ask Elaine.” Sturtevant, if asked about hers, would say: “Ask Warhol.”

Owls crop up throughout this latest show, and it is hard not to think that, rather like Daido Moriyama’s Stray Dog (1971), the wise bird symbolises a self-portrait of Sturtevant, who is now in her 80s. An amusing, beady-eyed owl wallpaper is printed with the word iStock. Titling and text play a crucial role in her work; transparency of authorship is one of necessity rather than generosity. Perhaps this is predictable given her consistent deflections when any personal scrutiny is involved.

Themes of looping and endless repetition are central to her work: examining the rapid growth over the past four decades of replication, revival, recycling and appropriation; asking us to unpick, question and reassess the machinery of this cultural phenomenon.

In a remake of the late Félix González-Torres's Untitled (America) (1994), lights cascade from the Serpentine's circular skylight. The original was exhibited at the Serpentine in 2000 for the Felix Gonzalez-Torres exhibition. Sturtevant wants us to think about the meaning art carries in today’s climate. How do artists mediate unwanted collaborations and appropriations of their work? Can we function with an open network/flow of references and still protect the profession of art, and how could subjectivity help?

The new works are different, not “copies” or homages. “The work is done predominantly from memory, using the same techniques, making the same errors,” says Sturtevant. In a society saturated with images, she is posing the questions inherited from Warhol’s famous Marilyn Diptych (1962), which she reworked as Warhol Diptych, 1973/2004. Other reworks includeDuchamp Fresh Window (1992), Beuys Fat Chair (1974) and Lichtenstein Happy Tears (1966-67). These iconic works beckon us to reconsider our position through this process of borrowed authorship; how does meaning change when a work is appropriated; does it have more or less influence?

Multi-screen videos show Elastic Tango (2011), grotesque at first sight, but playfully absurd. It borrows the violently provocative language of artist Paul McCarthy, most overtly in the way it flicks between documentary, commercials and cartoons: a running dog, explosions, Betty Boop, the American Flag, when suddenly the screen becomes brutally censored as it is dissected into thirds.

Rock & Rap Simulacra Act 3 (2013), another video installation, borrows its content from BBC wildlife and nature documentaries with playfully edited sequences: frog, diver, butterfly, runner, running water, gymnast, frog, owl. In the central gallery, Dillinger Running Series(2000) references Beuys’s 1974 film in which he dressed as the American mobster John Dillinger. The projector mounted on a turntable throws the walking image on to the walls, endlessly encircling the viewer; Sturtevant dressed as Beuys, dressed as Dillinger, a copy of a copy.

In the Serpentine’s East wing, in Finite Infinite 2010, another looped projection with an invisible turntable, a dog runs across the wall, frantic to escape – only to return.Looking outside through the small circular holes cut into the window blinds, one can imagine glimpsing the passing dog before it reappears as a projection on the gallery wall.

The questions Sturtevant raises are valid, worthy of interrogation. Yet the exhibition paints a rather bleak, pessimistic picture: the assumption that we are all treading the same hamster wheel of life, ceaselessly consuming without pausing to question. Perhaps we are disappointed with such overt appropriation and more at ease with it slipping past in disguise. 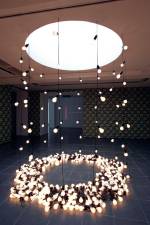 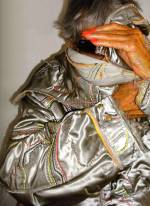