Revoliutsiia! Demonstratsiia! joins an effort by progressive cultural institutions to mark the centenary of the October Revolution, an event that shook the world 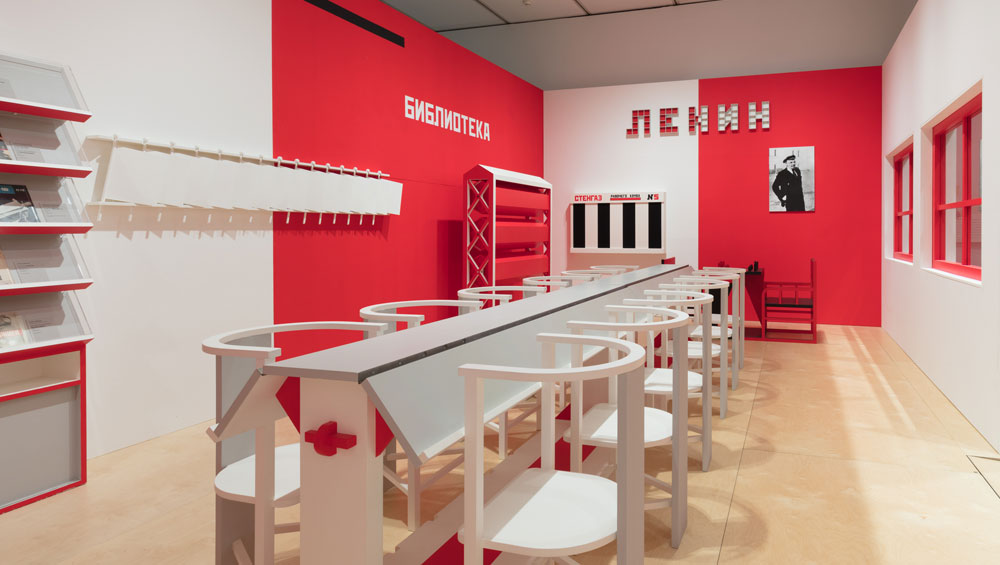 The date of 25 October 1917 is ingrained in the memory as that of the October Revolution, an event that took place in Russia, but, as American journalist John Reed memorably put it, shook the world. For the first time in world history, a revolution introduced a government that endeavoured to transfer all power to the proletariat in a mostly peasant country, inspired by the ideas of Karl Marx in Lenin’s creative interpretation. It took several decades to realise that this social experiment had failed. Nevertheless, at its inception, it inspired an impressive upsurge in the arts, paving the way for the appearance of artists and movements such as Kazimir Malevich and suprematism; Vladimir Tatlin and constructivism, El Lissitzky and an internationalist, cross-disciplinary, media-inspired approach to art-making. Even though Reed was among the first foreign journalists to hail the October Revolution, few US institutions deemed it necessary to commemorate its 100th anniversary. Revoliutsiia! Demonstratsiia! Soviet Art Put to the Test, at the Art Institute of Chicago, is a welcome exception. Along with Revolution Every Day at the Smart Museum of Art at the University of Chicago and Propositions For a Revolution (Slogans for a Future) at Krannert Art Museum at the University of Illinois at Urbana-Champaign, Revoliutsiia! Demonstratsiia!joins an effort by progressive cultural institutions to mark the centenary. 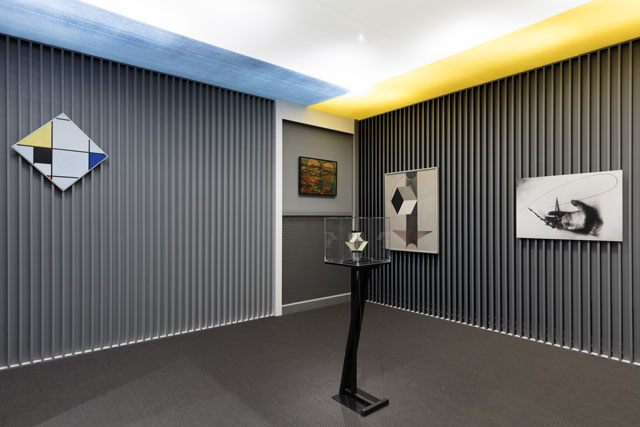 Soviet Art Put to the Test is an impressive effort by Matthew Witkovsky, curator at the Art Institute of Chicago, to present a comprehensive summary of early Soviet visual history. To this end, Witkovsky assembled a team of scholars, experts in the field of Russian avant-garde art, who advised him on the selection of objects and contributed essays for an impressive catalogue. These scholars include Yve Alain-Bois, Maria Gough, Devin Fore, Christina Kiaer, Kristin Romberg, Masha Chlenova and Barbara Wurm. They have arranged more than 550 paintings, sculptures, photographs, posters, prints and objects for everyday use into 10 sections designating particular social environments in which the works were displayed. These sections are the Battleground, the School, the Press, the Theatre, the Home, the Storefront, the Factory, the Festival, the Exhibition and the Demonstration. The works were made in Russia and other Soviet republics and mostly embrace the period from the mid-1910s to the 1930s. This type of organisation allowed the curator to introduce a large number of objects thematically, educating the viewer as to the modes and functions of visual culture brought into existence by the October revolution. 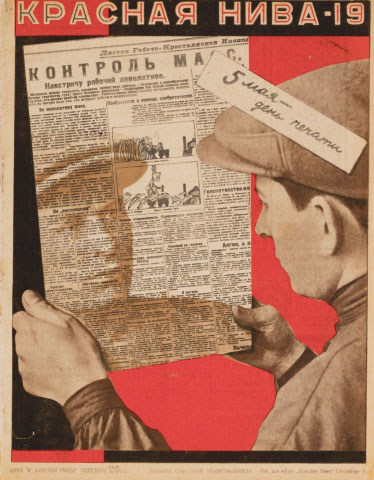 The exhibition opens with a hall full of posters and examples of printed press matter. Foregrounding propaganda as the main driving force of Bolshevik visual culture, the curatorial team have kept close to the historical truth of the revolution as a populist movement, the efficacy of which depended on the emotional response of a largely uneducated crowd. Posters on display are striking in the diversity of their visual language and in their political message. They range from Lissitzky’s famous Beat the Whites with the Red Wedge, which employs abstract shapes and basic colours to communicate with the viewers, to figurative stencils by the bard of the revolution Vladimir Mayakovsky, to unfamiliar images by unknown authors, such as a striking poster of an emaciated worker with the ironic caption “A Happy Worker in the Soviet Land”, showcasing propaganda production directed against the Bolsheviks by the Whites. Even though the exhibition features hundreds of examples of straightforward political propaganda art in posters and documentary photographs, as well as films by Dziga Vertov, it is heartening to see that the curators did not focus exclusively on this aspect. 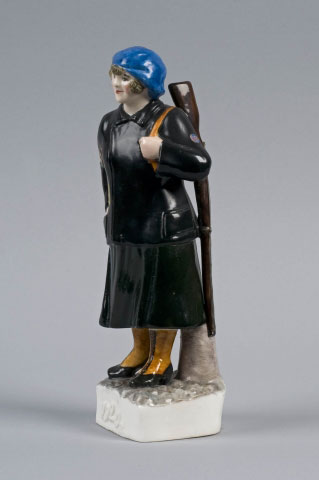 The section on theatre, for instance, features several stage and costume designs by Liubov Popova and Varvara Stepanova that have become classics in textbooks on constructivism. These two women became famous for their exploration of new visual languages of abstraction in painting and drawing, and in the creation of objects in the realm of design. Frequently, they combined the two areas of activity, as, for example, in Popova’s studies for a cage for a production of Fernand Crommelynk’s play The Magnificent Cuckold staged by Vsevolod Meyerhold in 1922. Were it not for the captions, these sketches of details of a three-dimensional scaffold for the play could be mistaken for non-objective drawings of geometric forms rather than studies for a functional construction. In her text for the exhibition’s catalogue, Chlenova described these sketches as “lines intersecting in space”, which in the stage set would represent “a highly abstracted windmill, a centrepiece of the play’s action.”1 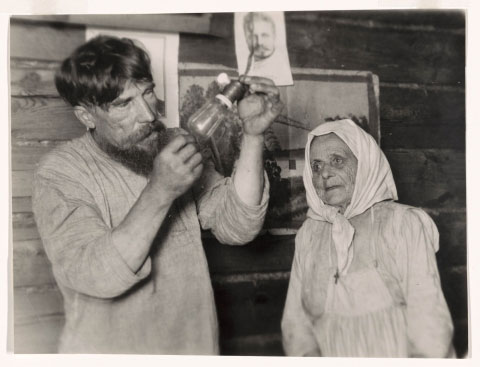 The school section of the exhibition features Popova’s painting Spatial Force Construction (1921) and a number of linocuts from the two previous years, while she was teaching a course on colour at the Higher State Artistic and Technical Workshops (VKhUTEMAS). A faithful student of Malevich and Tatlin, Popova integrated the former’s devotion to abstraction and the latter’s call for exploration of materials into a compelling style of her own. Her Spatial Force Construction juxtaposes various materials – the grain of exposed plywood, marble chips and the geometric lattice of intersecting lines, painted in bold colours – on a flat painterly surface. This painting can hold its own against Malevich’s magnificent Painterly Realism of a Football Player from 1915, from the Art Institute of Chicago’s own collection, and Tatlin’s early three-dimensional constructions, the absence of which is this exhibition’s most regrettable lacuna. Tatlin’s material culture is represented by his later work – a couple of photographs of his Monument to the Third International (1920), a design for his staging of Velimir Khlebnikov’s poem Zangezi (1923), an elegant wing strut for his flying apparatus Letatlin (1929-1932) and a baby drinking cup (1930-31). There is also curious footage from Sevzapkino news from 1923, showing Tatlin at the exhibition of paintings Petrograd Artists of All Trends. Even though it lasts for only a few minutes, the documentary allows us to catch a rare glimpse of this shy and reclusive genius. 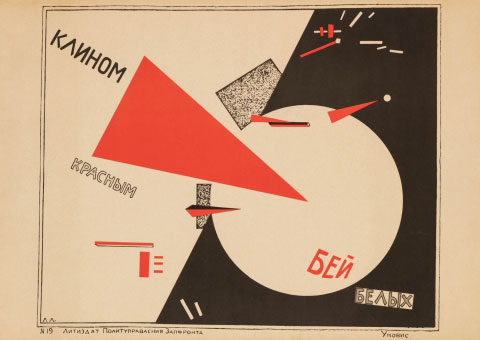 The home section of the exhibition features Popova’s embroidered fabric book cover, which gives a good idea of her geometric fabric designs – an enterprise on which she and Stepanova embarked in 1922 while employed at a state factory for production of printed cotton. Writing about the Home and Storefront sections, Kiaer remarked on the artists’ struggle to transform the domestic space, traditionally considered the women’s realm and filled with petit bourgeois trinkets that stifle men’s creative spirit. Soviet artists – women and men alike – confronted the challenge of the transformation of this space by creating design projects for furniture, objects for everyday use and advertisements for products of the state economy.2

Among the objects on display are several reconstructions, such as that of Aleksei Galaktionov’s folding bed, originally made around 1923, and Ivan Morozov’s table for writing, drafting and dining from 1926. Springing from debates about the virtues of construction versus composition conducted by Rodchenko, Stepanova and other members of the First Working Group of Constructivists at the Institute of Artistic Culture (INKhUK), these objects exemplify the principles of efficiency, economy and functionality extolled by constructivists, as the members of the group came to be known.3 At the same time, as Kiaer writes, as much as they wished to wipe away “the bodily persistence” of traditional domesticity, these objects failed to do so, perhaps because of their uncompromising hostility to anything that has to do with the notion of bodily comfort and desire. The constructivist objects’ failure to transform everyday life notwithstanding, it was heartening to see several of them reconstructed, because they were familiar to us only from old photographs and drawings. There are several reconstructions of constructivist sculptures at the exhibition, enabled by support from the V-A-C Foundation. 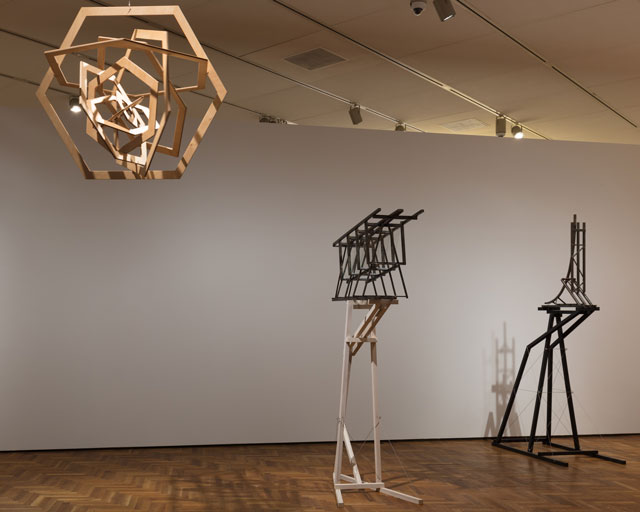 Apart from the functional objects, the exhibition features reconstructions of sculptures by several members of the First Working Group of Constructivists, such as Alexander Rodchenko, Karl Ioganson, Konstantin Medunetskii and Vladimir and Georgii Stenberg. Stepanova’s designs for Meyerhold’s production of The Death of Tarelkin and Aleksei Gan’s street vendor’s stand for Mossel’prom, both from 1922, add to this list. The most ambitious result of this undertaking is the reconstruction of two spaces – Rodchenko’s Workers’ Club, initially built for the International Exposition of Modern Decorative and Industrial Arts in Paris in 1925, and Lissitzky’s Room for Constructive Art, created in 1926 for the International Art Exhibition in Dresden. Both rooms are massive in scale, fitting the ample space allotted to the exhibition by the Art Institute, and allowing viewers to get a sense of what it may have been like to visit the original architectural environment. Although reconstructions can help the viewer to experience the spaces designed specifically for exhibiting abstract art and constructivist objects, the value of this experience may be questioned. True, it gives a general sense of objects’ location vis-à-vis each other and the viewers, but proportions or details of the actual manufacture may be not what the artist would have intended. It can be argued, as Gough did in her keynote lecture at the symposium Agitation for Freedom: Revolution and Its Avant Garde, at the Harriman Institute, that reconstructions of artwork may do more harm than good in being able to convey the general idea, but not the spirit of the work. 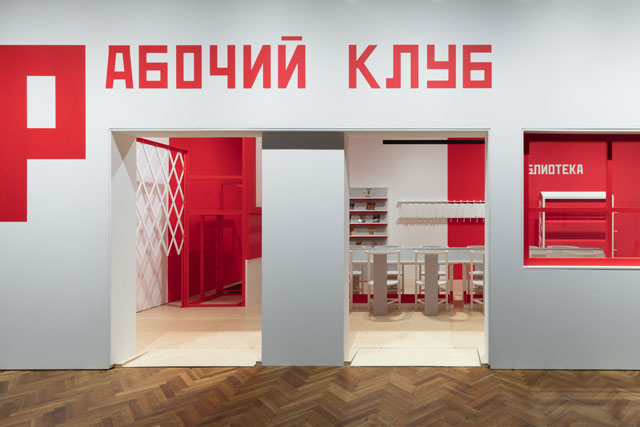 The exhibition inevitably suffers from Russia’s ban on allowing works belonging to state collections to be loaned for exhibitions in the US.4 Witkovsky and his team should be given credit for finding suitable alternatives in western collections, private and public, foremost among them Greece’s State Museum of Contemporary Art in Thessaloniki. The exhibition’s catalogue is the model of scholarly rigour and precision. Witkovsky and Fore have edited a volume that can be used as textbook and reference for a generation of scholars to come. 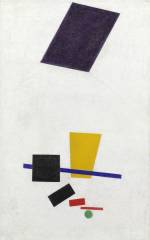 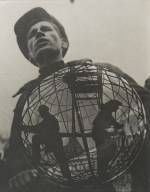