This year’s Dutch Design Week in Eindhoven brought together established and up-and-coming designers, from around the world. They displayed a collaborative work ethic and a lively engagement with real-world issues, from the refugee crisis in Europe to social development in South-East Asia

Eindhoven was a small provincial town until a father and son opened a factory and started to make light bulbs there in 1891. As the 20th century progressed, Philips was a catalyst for jobs and success. But when the firm’s headquarters moved to Amsterdam in 1997, the future seemed bleak. To avert social decline, universities and local businesses worked together to reinvent Eindhoven as a city of technology. Today, clusters of design companies are flourishing in the shells of old Philips buildings. People are drawn to the city and, as this is the Netherlands, are cycling to work. They pedal around a bicycle roundabout in the sky, called the Hovenring. Completed in 2012, this pioneering piece of cycling infrastructure was recognised by Wired magazine in its report this September on Eight Cities that Show You What the Future Will Look Like, in which Eindhoven was named in fourth place after Los Angeles, Shanghai and Medellín.

Dutch Design Week 2015 (17–25 October) explored how innovation is driven by the imagination. The 14th edition’s theme was “What If …” as a starting point of creativity. It suggested that innovation comes to fruition when designers look at reality from different perspectives and search for alternative solutions. This was apparent not only in the brilliant work of established names, but also in the creative thinking of up-and-coming designers at the Design Academy Eindhoven’s graduation show. Dutch Design Week’s director, Martijn Paulen, said: “Posing the right questions is the motor for the imagination. Designers think about how we will live and live together in the future. They dare to question everything, dream of a different answer and shape it. This is how they lay the basis for the innovations of the future.”

In Eindhoven, designers build smart networks in open-source projects. A case in point is the visual identity of city marketing organisation Eindhoven365, the winner of the Best Client Award 2015 at the annual Dutch Design Awards, despite the fact that the Rijksmuseum was nominated for the award too. Managing director at Eindhoven365, Peter Kentie, said the organisation set up what it called the Virtual Design Agency to create a unified identity of the city and a dynamic brand, which enabled people to work together, and led to a positive spiral of activity. Kentie said: “In Eindhoven, we have more than 2,000 designers. We used an analogy with football, where normally you have different teams playing against each other. For your national team, you bring your best talents together. That’s what we did with the design of Eindhoven. We picked the best people in Eindhoven, individuals from different agencies, and we put them together in a new virtual design agency.”

The Virtual Design Agency included not only graphic designers, but also an architect, a fashion duo, a product designer and a writer. Among the leading design agencies that Eindhoven365 worked with were Edhv, HeyHeydehaas, Raw Color and Scherpontwerp. The designers came up with the project’s core ideas and created a typeface, a logo, a tone of voice and an image culture. The zigzag-like “E”-shaped logo of the city was inspired by the idea of energy. The outcome was a vibrant resource for the citizens of Eindhoven, although the typeface was intended to be for the sole use of the municipality. The award-winning identity was testimony to the innovative work approach and the design thinking of established names and fledgling talents. Kentie said: “Eindhoven is a city that inspires people to be creative.”

Much of this creativity is nurtured at the Design Academy Eindhoven, an internationally recognised educational institute for art, architecture and design. The Design Academy’s graduation show, and its collaboration with the Van Abbemuseum, was one of the highlights of Dutch Design Week. The exhibition at the Van Abbemuseum, Thing Nothing (17 October – 15 November), explores the relation between form and counter-form, the real and the virtual, and technology and morality. The graduation show’s focus on product design typified the institute’s socially engaged approach. Creative director at the Design Academy, Thomas Widdershoven, wrote in the catalogue: “This year our graduates have been working with some of the most serious issues confronting society – racial tensions, refugees, social disconnect, healthcare, media, politics, environmental disasters – as well as a more extensive pursuit of form, colour and function.”

Designers’ projects ranged from the utopian to the real. Italian designer Stefania Vulpi was affected by the refugee crisis in Europe. Vulpi reflected on the benefits that her Italian citizenship could bring to an immigrant, in respect of the right to healthcare and education. She created an online platform, Universal Unconditional, where a global network of participants could exchange their citizenship. Vulpi said: “I designed an ideal system to create a network of people who could share or lend or borrow a citizenship for a short period of time … When I started this project, I was interested in the idea of nations and migration, but it wasn’t a time of crisis, like the end of the summer. I think it’s relevant as a conversation starter. I hope to collect feedback from people, to hear what they think about the matter. I hope to archive it somehow.”

Dutch designer Pim van Baarsen looked further afield, to Kathmandu in Nepal, where only a fraction of waste is recycled, while most rubbish pollutes the environment. He devised an incentive scheme, Holy Crap, to encourage waste separation and recycling. Families are given different coloured bags for different type of recyclables. Using near-field communication technology, bags are logged on an app, and every bag earns credits for products or services, such as phone credits. Van Baarsen said: “People are motivated by the gamification element, where they can find out how green they are, or how their district is doing in Kathmandu.” Since a powerful earthquake shook Nepal earlier this year, the project is still under development. Yet the designer maintains that the reward system is relevant as it raises environmental awareness.

Global challenges were also the subject of the initiative Age of Wonderland, run as a collaboration between the non-governmental organisation Hivos, Baltan Laboratories and Dutch Design Week. This year, the theme focused on what we eat, our food systems and their impact on our lives and our health. Six creatives from Africa, Asia and Latin America shared their perspectives on global food systems and worked together with local organisations. Artist, graphic designer and curator Arie Syarifuddin collaborated with Dutch studio Atelier NL, to create an edible form of clay in the shape of a font, as part of a visual identity that supports a regional development strategy in a small village of Jatiwangi in West Java, Indonesia – which has been blanketed by a haze this autumn, following fires in Sumatra and the Kalimantan Forest. The village has a rich fertile soil, so is a centre for roof-tile manufacturing, which holds much local significance in the region. Yet many local people are choosing to work in a new sports clothing factory and construction is gathering pace, which is bringing changes to the region and affecting the identity of people in the village.

Syarifuddin is part of an artists’ collective, the Jatiwangi Art Factory, which has grown from humble beginnings 10 years ago, to become a regional presence today. The collective started working with 10 families in the village of Jatisura on art exhibitions, theatre and music performances, and now works closely with 16 villages in Jatiwangi District and Jatiwangi District Government, as well as a number of surrounding districts.  Syarifuddin said: “In Jatiwangi, issues around clay, soil, land and earth are sensitive issues concerning our identity. Through our work at the Jatiwangi Art Factory, we want to connect the inhabitants of the region and restore their dignity.”

He added: “With our work and projects over the past 10 years, we want to redesign this identity and tradition as a new culture to prepare residents for, and guard against, the massive development in Jatiwangi, such as the construction of a new highway and international airport to transport the sports clothing manufactured in the new Nike and Adidas factories. The most important thing for me is to create collective happiness. Then people can think clearly about what is actually happening in their environment and gain the confidence to solve problems in a more creative way.”

Syarifuddin was supported in making his edible form of clay by the Dutch ceramics studio Atelier NL and Russian artist Masha Ru. He was impressed by Atelier NL co-founder Lonny van Ryswyck’s research into hundreds of clays from around the Netherlands and other countries. Atelier NL is a place where design and education come together, said van Ryswyck in their studio in a former church in Eindhoven. Surrounded by objects of earthy clay in many shades, she explained that she provided a library of research and Ru offered expertise in food production. Van Ryswyck said: “We showed Arie how to visualise knowledge. If you show where clay comes from in relation to the people, the culture, the soil, it tells a story. It goes from the landscape to the cultivation of the land. There is a saying, that you can see the world in a grain of sand.”

In sharing knowledge and expertise, the participants hoped that this initiative would effect change in different cultures far across the globe. In doing so, they affirmed the ethos of innovation and socially engaged approach of many designers and artists at Dutch Design Week 2015, who aimed to solve real-world issues. Like the citizen-centred visual identity of Eindhoven, the identity of the village of Jatiwangi, in Indonesia, placed residents at the heart of its strategy. By comparison with the app promoting environmental awareness at the Design Academy Eindhoven, the project aimed to change systems from the ground up, in a country ravaged by environmental disaster. In light of the news that humans exhausted a year’s supply of natural resources in less than eight months this year, such awareness gives a grain of hope for the future. 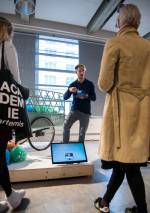