The Plains Indians: Artists of Earth and Sky

The Plains Indians: Artists of Earth and Sky

This exhibition of the art of the Plains Indians reminds us about the native US population’s story of struggle and survival, as European conquerors took over their ancestral lands

It contains 150-plus objects, ranging from 100BC to the beginning of the current decade. What is particularly surprising is that, throughout a more than 2,000-year history of existence documented by the exhibition, Native Americans managed to preserve a unified visual language, the aesthetics of simple lines and geometric clarity. This aesthetics might have preserved its consistency precisely because visual representation was the only way of record-keeping, since they did not have any written language when the Europeans entered their land.

The show’s simple and logical design helps to manage the enormity of visual information. It begins with two maps, one outlining areas of the Plains Indian tribes in the early and mid-19th century and another showing the locations of present reservations and places where Native Americans live today. While they have occupied the continent since times immemorial, the exhibition devotes overwhelming attention the post-contact era, especially the past 300 years of Native American history. The display area is divided into seven parts, following the chronological frame of this history from ancient times to the present day, with only six objects from 100BC to 1700, all drawn from the US collections. Each of these objects – two figures of men, two of buffalo, an incised tablet and a shell mask gorget – are exceptional in the efficiency of the expressive means and the simplicity of design. Defying our sense of progress, the oldest artefact among them, Human Effigy Pipe from the collection of the Ohio Historical Society, is also the most complicated formally: the human figure, into which the pipe is shaped, has distinct facial features and an elaborate hairdo and dress. Its half-bent legs beg a comparison with effigy figures from Africa. The body of the object is made of perfectly polished pipestone.

The six periods from 1700 to the present are divided in accordance with significant events that defined the Native American history: their colonisation and tribal wars, the death of the buffalo, the Indians’ confinement to reservations, their partial relocation to urban areas in the first half of the 20th century, and contemporary artistic revival. Each period is introduced by a short wall text written by the curator of the exhibition, Gaylord Torrence, as well as by brief commentaries by three other specialists involved in the project: Colin G Calloway, a scholar from Dartmouth College; Arthur Amiotte, a native artist of the Lakota tribe; and Emma I Hansen, a curator emerita and senior scholar at Plains Indian Museum. We learn interesting facts from these snippets of information: that the common image we have of an Indian on horseback has been in existence for only around 200 years, because the horse was not brought to the Americas by the Spanish until the 17th century; and that a series of devastating smallpox epidemics brought in by the Europeans at the end of the 18th/beginning of the 19th centuries eradicated most of the Native American population on the continent and helped to ensure its conquest. While these texts are helpful for a basic orientation, they are extremely fragmentary and offer only general guidelines to the understanding of history. For viewers interested in more detailed information, a weighty catalogue offers two major essays by Calloway and Amiotte, which provide a more detailed excursion into the tragic part of the Native Indian history – their story of unequal fight and loss – and their survival. At the exhibition itself, the viewer is guided not by texts, but chiefly by visual cues.

There are many of these cues because the Native American population used the same types of objects throughout their brief and turbulent history of modernisation and adaptation to the life brought to them by the conquering nation. These are either items of dress, such as robes, dresses, shirts, headdresses and moccasins; ceremonial objects, such as drums and roach spreaders; things for everyday use, such as pipes, tobacco bags, cradleboards (baby-carriers), suitcases and bowls; military equipment, such as shields, as well as several effigy figures, a few drawings on paper, paintings, photographs and one video from the contemporary section. As far as historical periods are concerned, it is difficult to single out the most exciting work on display because all the objects are remarkable in the quality of their craftsmanship and their visual appeal. There are spectacular human and animal effigies, strikingly expressive drums and shields, and beautifully crafted moccasins and dress items. The many robes belonging to various periods deserve particular attention, since they also served as tools for visual record and storytelling.

Among these robes, the earliest belong to the collection of the Musée du quai Branly because the French were among the first collectors of the Native American artefacts. The exhibition showcases four remarkable robes from that collection. The earliest dates to c1700-1740 and is attributed to a mid-Mississippi river artist. It features a red, black and brown geometricised design of a gigantic mythic bird spreading its wings over the robe. A similar item from c1740, a so-called “Three Villages Robe” made by a Quapaw artist, shows Native Americans and French figures in a sparsely decorated, but geometrically clear and precise arrangement of two lines of dancers and warriors carrying French-made muskets. The image is framed by representations of buildings – including churches and wigwams. Apparently, it was made to welcome the union between the French and the native inhabitants of the land. A robe dated c1750 is covered mostly with geometric designs and two figures performing the Calumet Dance, a ceremony common to the Plains and the Prairie Indians. Two 19th-century robes celebrate military achievements of the Indians – one covered with images of Indian warriors on horseback and on foot from the collection of the Musée du quai Branly and another depicting a battle between the Mandan and the Sioux from Peabody Museum of Archaeology and Ethnology at Harvard University.

These storytelling and commemorative robes paved the way for the transition to traditional arts of drawing and painting. The Sun Dance painting is an impressive example of the continuation of this tradition. Dating from the later part of the 19th century, the painting depicts an annual rite of renewal celebrated across the Plains. Amiotte described this ceremony as presenting “total epistemology of the people”, marking their union with nature’s forces. The painting depicts the pole to which participants of the ceremony attach themselves, to be torn away in a symbolic act of blood sacrifice to the powers of the sun, and many attendees, who are placed underneath canopies that protect them from the burning rays of the sun. As in the robes, the scene of the action occupies the entire surface of the painting, with clear compositional structure and the divisions between groups of people who could be identified by their roles in the ceremony. Apparently, the Sun Dance ritual was outlawed by the US government in 1883. Despite the prohibition, Native American artists continued to depict the ceremony, ensuring its reemergence when the ban was lifted in 1978 by the introduction of the American Indian Religious Freedom Act.

The contemporary section of the exhibition is most poignant because it reveals that, to preserve their culture, Native Americans continue to make works inspired by memories of the past. They recreate iconic dress items and decorative patterns; they perform rituals passed on to them by their ancestors; they commemorate events that defined the course of Native American history. One of the most effective works from the contemporary section is Wounded Knee III by Amiotte. This is one of a series of “media collages” depicting the scene of a US Army’s massacre of 150 unarmed Lakota Indians at Pine Ridge Reservation on 29 December 1890. It is composed of four horizontal representations of the scene of the massacre more than 100 years ago and the sacred ground of it as it appears today. There are also photographic portraits of important members of the Lakota tribe. The collage is framed by newspaper clippings from an 1876 issue of The Press, a Philadelphia newspaper reporting an Indian victory over US army forces at Little Big Horn. The image has an iconic aspect, as it represents both Native American and Christian divinities hovering above the scene of the massacre and the artist’s family cabin.

As Amiotte wrote in his essay in the exhibition’s catalogue, in the absence of the written language, visual art encrypted values and beliefs of the native population of the Americas. The story of Amiotte’s people, the Lakotas, and of the US native population is that of struggle and survival, which came at the price of paying particular attention to the preservation of rites, rituals and symbols of the ancestral culture. This exhibition is a stark reminder of this story. 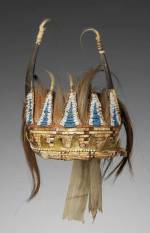 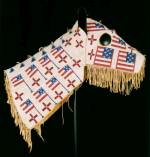 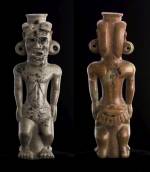 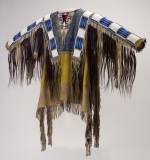 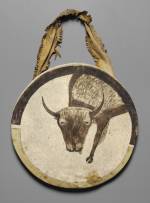 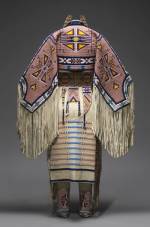