In the Kingdom of the Gods and Goddesses

In the Kingdom of the Gods and Goddesses

In 1950, Jawaharlal Nehru, India's first Prime Minister, invited one of the greatest proponents of Modernism, the famous Swiss-born French architect Le Corbusier, to design the new Punjab capital at Chandigarh to reflect the new progressive free India, 'unfettered by the traditions of the past' and 'a symbol of the nation's faith in the future'. Consolidating ten small villages in the foothills of the Himalayas, the capital would be neither entirely Indian nor European. The monumental government buildings were mostly constructed from concrete - the modern miracle building material. Although many people were seduced by this extraordinary homage to progress, others found the architecture's oppressive austerity and disregard for indigenous artistic traditions offensive.

Then, in 1975, an even more remarkable underground city was discovered in Chandigarh. For 18 years, humble, self-taught Hindu artist, Nek Chand, had been secretly constructing an extraordinary folk art environment. Although Chand called it the Kingdom (nagri) of the Gods (devis) and Goddesses (devitas), his creation was soon known around the world as Rock Garden.

Chand fled his native Punjabi village of Berian Kalan, north of Lahore, in 1947, after the British partitioned the country into India and Pakistan. With no more than a high school education, the young man found work as a road inspector for the Public Works Department in Chandigarh in 1951 when construction of Le Corbusier's experimental city commenced. In his spare time, he gathered mis-shapen rocks and other discarded materials he found on demolition sites to build his own vision of an ideal city in which men and women, birds, monkeys, tigers, bears and other creatures live in harmony with each other and the environment. He chose for his hidden sculptural park a gorge in a forest preserve near the Sukhna Lake that was protected from any industrial encroachment and little visited. Using Le Corbusier's poured concrete method, Chand created figures ranging from one and a half to six feet tall and added brick dust to the mixture to vary the colour. He recycled whatever he could find - old shoes, hats and rags, broken pots, dishes and tiles, soda bottles and bottle caps, light bulbs, oil-drums, discarded tyres, rusty bicycles, abandoned dolls, and even birds' nests and human hair saved from barber shops. He planted flowers, trees and shrubs along the arched walkways, walls, terraces and waterways he had constructed. Because Rock Garden was on public land, what he was doing was illegal and his private concrete kingdom was in constant danger of being demolished at the politicians' whim. But the people loved it and came to its defence over and over again.

When it was officially opened to the public in 1976, the city put Chand on salary as 'Sub-Divisional Engineer, Rock Garden' with a staff of 50 workers. On 7 July 1988, the governor on behalf of the people of India dedicated the park to 'the spirit of creativity'. But that did not prevent shortsighted bureaucrats from withdrawing funds and encouraging vandalism in 1996 when the artist was out of the country on a lecture tour. Today, Rock Garden is protected and maintained by the Nek Chand Foundation.1 At 81, Chand continues to oversee the work. His enchanted place now comprises over 2,000 people and animals in a 25-acre park and his personal vision embraces community concerns. The vast labyrinth of interconnecting paths and waterways contains swings for children, a miniature village, an amphitheater and an impressive man-made waterfall. The Rock Garden in Chandigarh is the world's largest folk art environment and the most popular tourist site in India, second only to the Taj Mahal. It has been estimated that 5,000 people visit daily. To date, approximately 12,000 visitors have been drawn to it.

Nearly all of Chand's art has been made exclusively for Rock Garden in Chandigarh. Rarely has a piece of his sculpture come on the open market. Currently on display at the American Folk Museum in New York are 24 sculptures he made for the now defunct miniature 'Fantasy Garden' he built in 1984 for the National Children's Museum in Washington, DC. 'Concrete Kingdom: Sculptures by Nek Chand' runs from 4 April through 24 September 2006. Over 30 tons of concrete were needed for the child-sized figures of 'Fantasy Garden' and then shipped by boat to the three-acre site in Washington. Chand personally oversaw the installation by local artists, children and other volunteers. When the museum was forced to relocate in 2004, this American Rock Garden was dismantled and the sculptures were donated to the American Folk Art Museum. Although his animals and people are now devoid of their natural setting, the exhibit places them against enlarged photographs and videos of Chandigarh to give a better idea of how the artist envisioned them within the environment.

Concrete is the material of choice for many folk art environments. It is malleable, durable and cheap. Chand's figures may seem stiff and static until one studies the artist's fluid visual shorthand. His water carriers are perhaps the loveliest creations in the show. He beautifully captures the strain and sometimes pain in the women's bodies from carrying their heavy full jugs day after day. The artist cleverly plays with found materials. He adds shimmering colour and variety by applying broken glass bangles to the wet concrete. Bits of patterns and trademarks in shards of discarded hotel crockery sometimes dart across clothing. Chand's sweet, childlike naivete is infectious. His delightful little monkeys are especially endearing, and his green duck is an elegant exercise in grace and economy of expression. Chand's colourful, jagged, crockery-festooned surfaces recall Spanish architect Antonio Gaudí's mosaic-covered buildings in Barcelona. The troops of moulded figures, particularly the long-legged soldiers and police, are also reminiscent of the lines of buried terracotta warriors that were uncovered outside the city of Xian, China, in 1974. Added to the 24 examples from the National Children's Museum are five earlier plain and less inventive pieces that the artist gave to the American Folk Art Museum in 2001. These loving couples or mithunas were drawn directly from Indian tradition and represent the essence of life. Even these relatively conservative sculptures anticipate the wit and sense of Chand's mature style. Admirers may regret that 'Fantasy Garden' is gone, but they may still grab a sweet glimpse of Chand's peaceable kingdom at the American Folk Museum in New York. 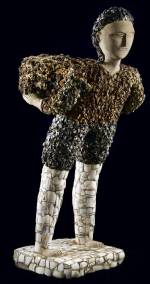 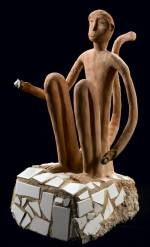