Close Watch, Takala’s multi-channel video at the Finnish Pavilion, is based on her time working undercover as a security guard in a large shopping centre. As she explains, it explores the concept of how private companies exert control over the behaviour of the public

The Berlin- and Helsinki-based artist Pilvi Takala (b1981, Helsinki) has an established practice of filming performative interventions, often going undercover to reveal the hidden workings of systems that constrain or control our behaviours. For the 59th Venice Biennale in the Pavilion of Finland, her presentation Close Watch (2021) reveals the research she undertook into the private security industry, spending six months undercover as a Securitas guard in one of Finland’s biggest shopping centres. The work painstakingly exposes the multitude of subtle and overt strategies for controlling behaviour between guards and members of the public, but also between the guards themselves, and reveals the invisible boundaries of what we consider acceptable behaviour in what is supposed to be a public space but is, in fact, part of the privatised public realm.

For ethical reasons, Takala could not film the day-to-day experience of guards and members of the public, but she used the six months’ immersion to observe and record in her notebook issues of concern and interest, stepping over the line from being a performer to becoming a participant. As she says here: “I was actually doing the work, so there wasn’t any pretending in it. And it was … quite challenging. For me, the research was also about: What problems will I have doing that work? What are the ethical considerations? I was, of course, interested in my colleagues but also in myself, how to do this work well.” 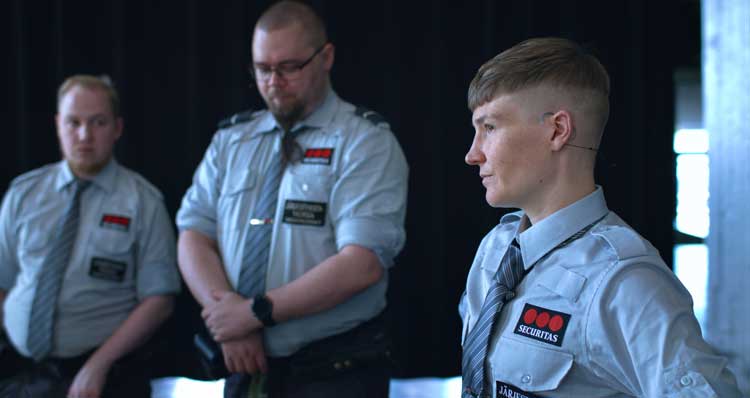 Takala worked with the architects Studio LA to adapt the original Alvar Aalto-designed Finnish pavilion to turn it into a space that articulates the dual nature of watching and being watched. The front half of the pavilion, where Takala reveals the methods by which, after her six-month work stint, she invited her fellow guards to participate (some were happy to get involved, others not) is screened off from the rear part by a one-way mirror, which obscures what is going on behind. The rear two-screen space shares the post-surveillance performances and workshops, but here the dividing mirror is clear so you can witness these communications, while knowing people are unaware that you are watching them.

In these workshops, Takala, along with several of her ex-colleagues and three actors, re-enact and dissect incidents from her field research, sometimes replicating incidents verbatim, sometimes improvising. Borrowing the participatory technique of forum theatre, she and the participants explore power dynamics, ideas of social justice, and alternative strategies for situations that can trigger or be triggered by use of excessive force, racist language and toxic behaviour. With insight and intelligence, for the most part, her ex-colleagues reflect on their behaviour, their roles and responsibilities. 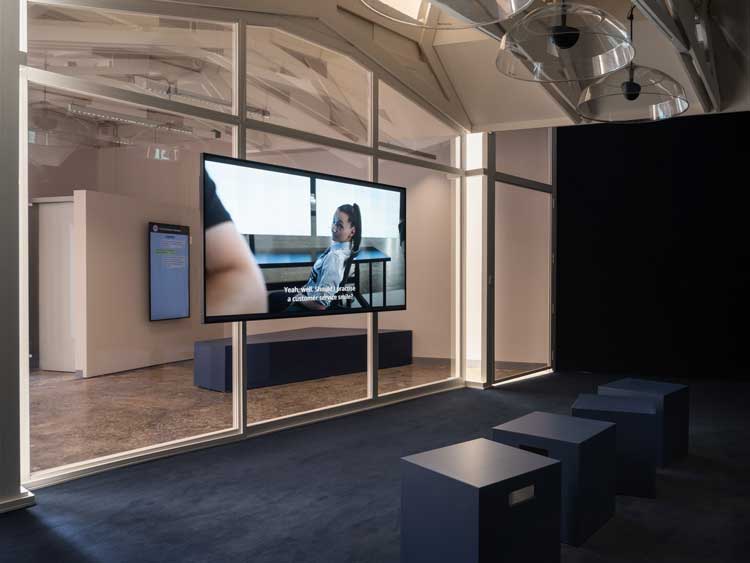 As the communications unfold in the front room between Takala and her former workmates, one is struck by the openness and clarity of Takala’s approach – even in text or WhatsApp form - and her colleagues’ generally enthusiastic responses speak of the trust and respect that clearly built up between them.

Takala has made previous works looking into the security industry, but her field of investigation has also included the realms of Hackney hipster co-working hubs and the tightly controlled environment of Disneyland. For The Stroker (2018), she posed as a wellness consultant in the east London co-working office Second Home, observing people’s responses to her overtly tactile overtures. For Real Snow White (2009), in a work both sinister and playful, she dressed up as Snow White and filmed the disturbance that created at the Disneyland entrance when the guards refuse her entry, using a variety of excuses, but ultimately exposing the Disney brand’s tight control of their image and that of its characters, which must be protected at all costs.