Philip Pearlstein’s nudes are a triumph of draughtsmanship and the product of a lifetime of learning and graft. And although he strives for images devoid of stories, this skill betrays a more enigmatic world 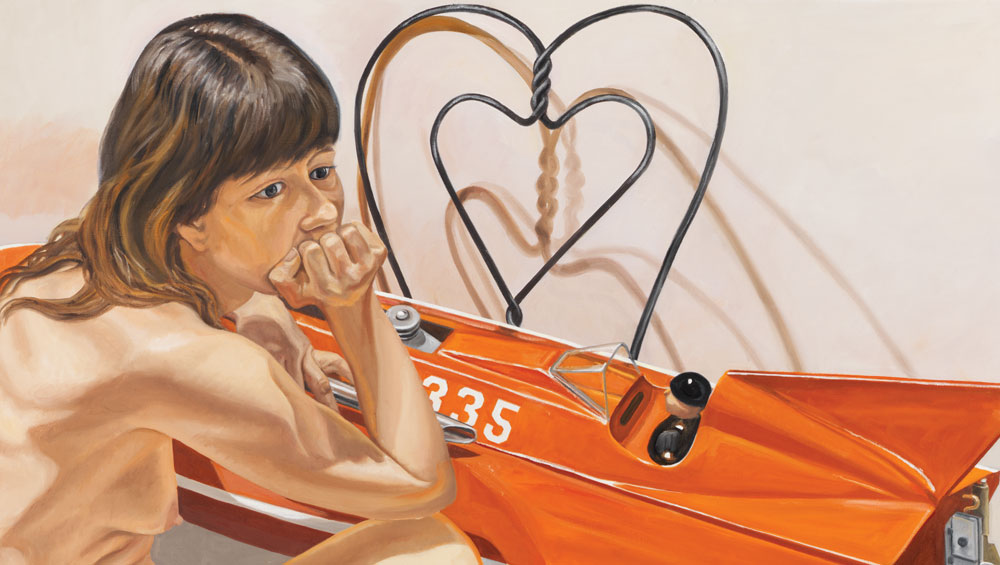 To say that American painter Philip Pearlstein (b1924) paints his models with the same cool detachment as he paints his props is not a criticism. The nonagenarian artist is unapologetic about being artistically uninterested in painting personal lives, or in telling a story. The flesh he paints is dispassionate, unerringly smooth, almost glossy, in the studio light. The tangle of long human limbs – he prefers to paint “long people”, he says, because they move in more interesting ways – echo the table legs or the necks of wooden geese that frequently appear in his pictures alongside a clutter of knick-knacks and brightly patterned rugs. Since the 80s, Pearlstein has been adding such stray objects to his paintings, in part, it seems, to set himself a challenge. But there is a lingering atmosphere in the works brought together in the basement of the Saatchi Gallery. It is possible that he has captured more than he set out to. 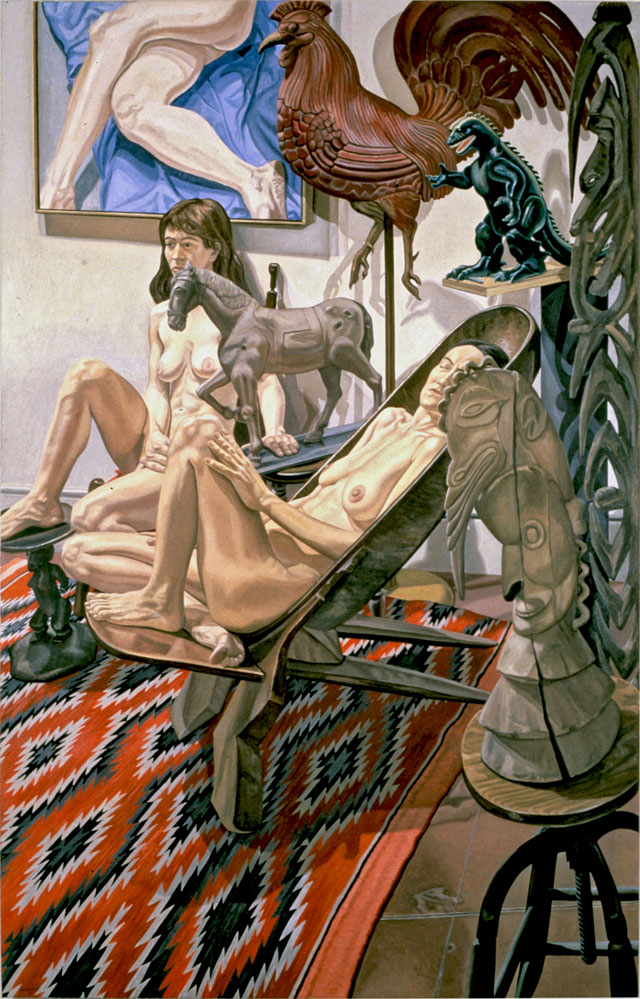 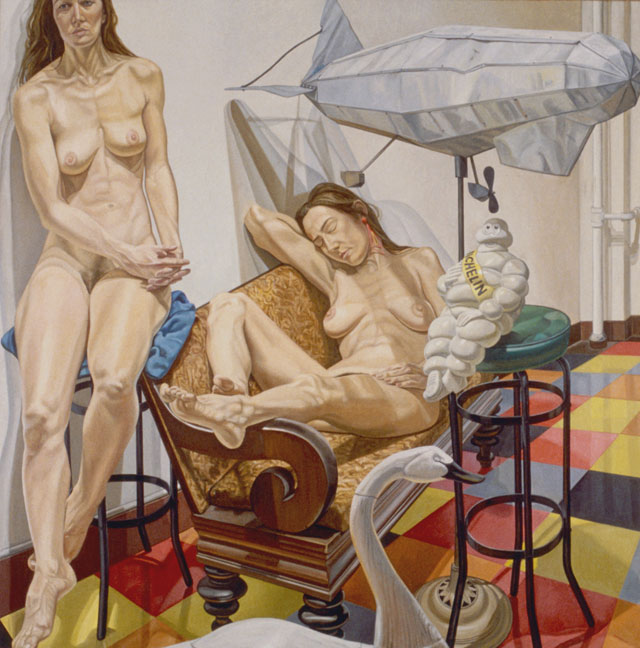 Pearlstein realised from an early age that his future lay in art. He won the National Scholastic High School Magazine art contest with his first oil painting, which was printed in Time magazine, and exhibited at the Metropolitan Museum as part of a travelling exhibition. This was big news for a humble boy from Pittsburgh and helped to keep him out of the firing line while he served with the US army during the second world war. Because his painting had been in the influential magazine, he was assigned, after some gruelling training with the infantry, to a specialist unit that produced instructional charts on weapons for new recruits. 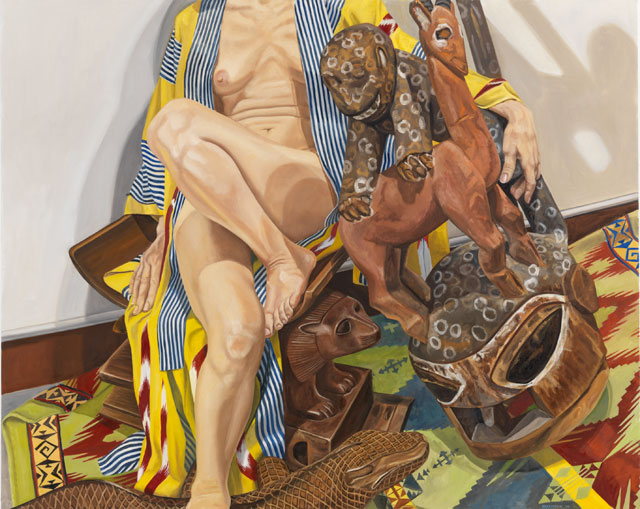 During a posting to Italy, Pearlstein had the opportunity to get up close to the art of the Vatican and to visit exhibitions set up by a team of British art historians, who had brought together works in liberated cities – art that had been hidden for safety. On returning home, he studied at the Carnegie Institute of Technology in Pittsburgh, where he met Andy Warhol. The two became firm friends and moved to New York where they sublet a basic, cockroach-infested flat in Brooklyn, until their landlady was evicted and they were forced to move out. 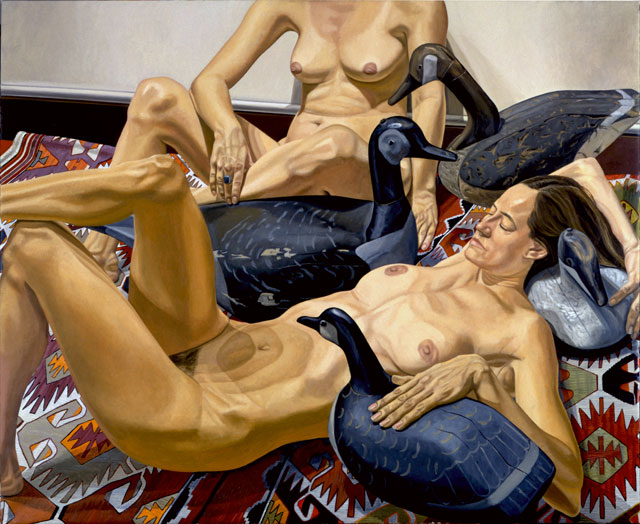 Pearlstein then married fellow art student Dorothy Cantor and began teaching and taking on commercial work to support their growing family. In these postwar years, abstract expressionism was the dominant force in the US art world and Pearlstein dabbled in this stylistic doctrine, without fully embracing it. Then, in the early 60s, unsatisfied with following other people’s ideas of what art should be, he decided to cut his own path and pursue realism. It was a brave move that had the potential to put an end to his career. 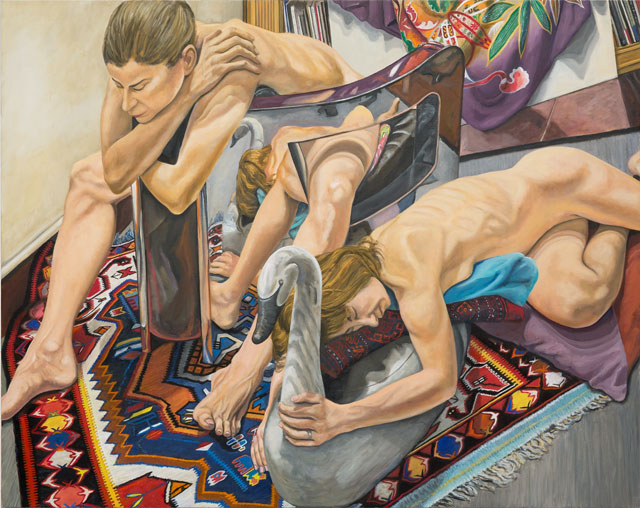 In America, figurative art was considered kitsch and unworthy of serious shows, and, in Europe, realism was still associated with fascism. It was the kind of art that Mussolini promoted, the kind of thing that Hitler approved of. It was certainly not what a young Jewish man should be painting. In short, the figure had been demonised, blasted from the art world by a war that used the human body as a propaganda weapon. But the mood would eventually shift. Pearlstein’s time would come, and, luckily, he was in it for the long haul. He was hired to teach life drawing, something he knew little about at the time, and learned on the job. This, together with his background in graphic design, shaped everything that followed. 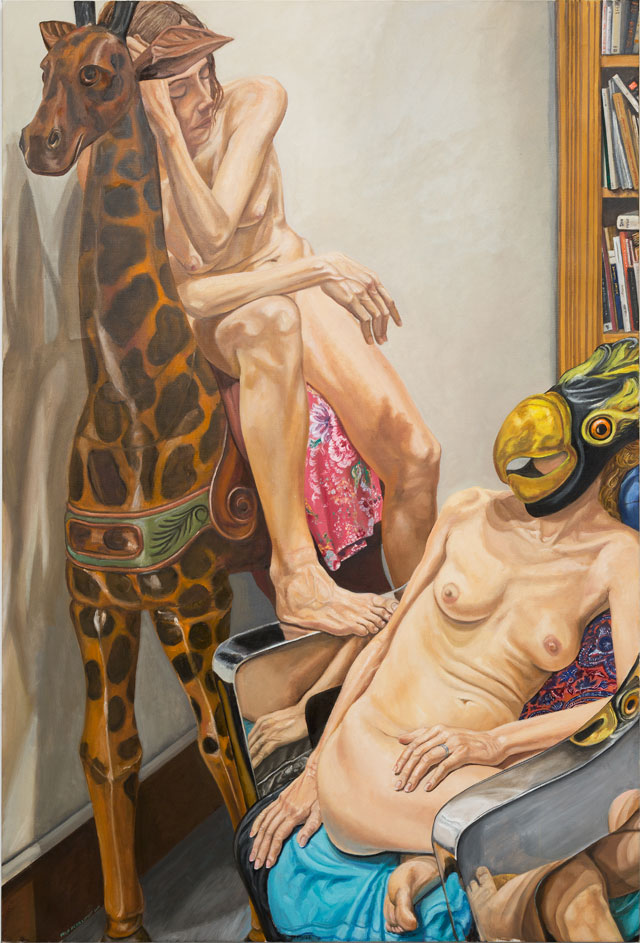 Pearlstein’s early nudes form uncluttered compositions. There is very little – save a plain blanket or mattress – to distract from the figures. They are largely unemotional images. Relationships are implied by proximity only, and flesh is sanitised. There is no reddening of cheeks, no seductively curved hips or parted lips. But over the course of the years – prompted by a model who took a liking to a collection of marionettes that were hanging in his studio – objects started to creep into the compositions, until the figures became caught up in a tangle of Americana and patterned rugs. And nothing is prioritised in Pearlstein’s work. Every detail takes on the same significance, leaving the eye to wander unguided across the canvas. 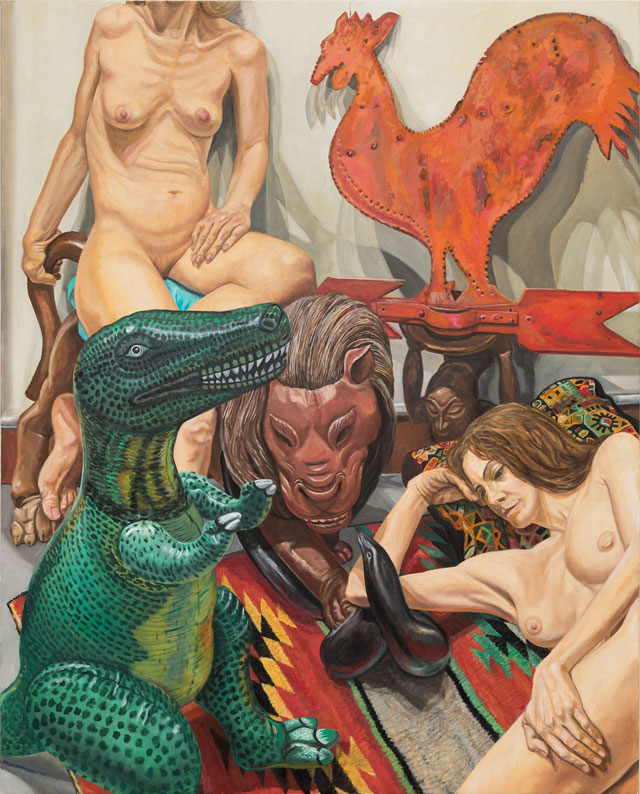 His models, often fellow artists he has known for years, choose what they want to pose with and which position they will take, but clues to personal lives creep into the pictures. Wedding rings, earrings, tattoos and painted nails hint at personal lives beyond the gallery walls. These are real people with stories attached. These day-dreaming women are bound to be mulling over the week’s events to the classical music Pearlstein likes to play in his studio. And sometimes this shows on their faces with a slight frown, a hand cupped under a chin or a far-off gaze. It is as though the complexity and chaos of life has spilled out into the studio space, that the things these women surround themselves with somehow reflect their inner lives. The longer you look at these women, the more time you spend with them, the more it seems that these paintings have been hijacked. These models are telling stories that the artist did not intend. 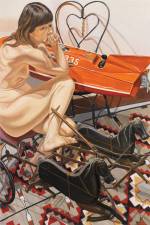