Intimate photographs of a fashion legend by the ultimate fashion photographer

Kate Who? at the Saatchi Gallery, London examines Mario Testino’s unique relationship with Kate Moss.  The exhibition of seven selected works by Mario Testino is on view and for sale at Phillips de Pury & Company's exhibition/project space at the Saatchi Gallery. Eleven prints are also showing at Phillips de Pury & Company headquarters and gallery space in Howick Place, London. The two exhibitions of Mario Testino’s photographs belong to the series of 18 exhibition prints celebrating his work with his favourite muse Kate Moss. The iconic images are produced in the new book, Kate Moss by Mario Testino, (Taschen, 2010). Testino describes Moss:

“Kate represents the ultimate kind of woman, an icon of our times. Not just an image of beauty, but of a life style, an attitude. She has been a catalyst for many things and transcends the notion of a model who models a ‘look’ or a hair style – she represents a world, a whole way of being, living in a moment where everything is communicated globally and without restraint”.1

Testino portrays the modern woman of the 20th century with great skill. He captures Kate Moss’s natural beauty, her femininity, and her power; Testino’s images radiate energy and glamour. The partnership of photographer and muse has already assumed iconic status. Whilst appearing to present images of glamour and beauty, Testino is in fact concerned with the deeper question of identity. His preoccupation with light and the technical aspects of photography have pushed his work to remarkable heights. His early work was influenced by the photography of Cecil Beaton. Testino recalls:

“I discovered through trial and error that I could manipulate the light by tearing holes in paper stuck on the window panes to model the face of the person I was photographing. I did not use flash because it was beyond me technically and far too expensive. When eventually I could afford to work with an assistant I found one who was excellent at lighting”.2

Kate Moss’s unique status began early on at the age of 14 when she was discovered by a modelling scout, leading to appearances in several fashion related campaigns (including designer labels such as Gucci, Dolce & Gabbana, Versace, and Calvin Klein). Asserting her own creative spirit, Moss has recently launched her own fashion line with Topshop.

Born in Lima, Peru, of Irish, Spanish and Italian origins, Mario Testino first studied Economics, Law and International Relations. However, by the late 1970s he had moved to London and it was there that he started to train as a photographer. In the early 1990s, he emerged as one of the leading fashion and portrait photographers. Alexandra Shulman, Editor of British Vogue since 1992, described Mario Testino's role in the fashion world at this time:

“Although he had been working as a photographer for a number of years it was only around this time that the signature Testino style gelled. All photographers need to establish in the viewer's mind what it is that they bring to the subject, to transform it from a simple depiction to something they have uniquely seen. What Mario offered straddled the old and new. The aura was glamorous but he had a footing in reality. Both his male and female subjects looked the way that you might look, not in your wildest dreams, but at the remotest end of possibility… His work does not expose vulnerability, worry, neuroses and conflict, because he edits the world that he wants to present and those aspects aren't in it.3

The technical quality of Testino’s work is exceptional. Scale is a vital factor, putting the work on to a different plane, in terms of serious portraiture, than the same image in the format of a magazine or book. Where photographic portraiture traditionally chose the subtlety of black and white, Testino has developed techniques in colour photography that emphasise glamour and hedonism. At times, the colour is brash and exciting; in others it is more subtle and elegant.

The collection on view this summer consists of 18 iconic shots of the British beauty, Kate Moss, each enlarged to life-size proportions. Although there is no indication of value from the auction house, Phillips have records of a Testino photo of Keith Richards and Mick Jagger for $75,000 and it has been suggested that the Moss shots are of similar value. Although Testino has made his fame and fortune from the world of fashion and style he has insisted that his work is not art, but commerce. Perhaps, as Patrick Kinmonth points out, “he has made an art of commerce in the creation of his trademark – a particular nonchalant sensual beauty”. His portraits, on the other hand, show a humanistic reverence for the human form – perhaps imbued by his Peruvian Catholicism and close family life. Kinmonth observes: “In his words reverberates a distant echo of the humanists of the Renaissance, whose experiments with optics and study of the body established a degree of realism in the portrayal of the human form not seen since the classical era. Testino's portraits, born of an aggressively commercial and modern world nevertheless can claim to be part of the tradition of depicted beauty at a time when art itself prefers not to look at the beautiful straight in the face”.4

“Kate Moss is the quintessential woman of our time. Her iconic impact can only be compared to women from other eras such as Marilyn Monroe, Botticelli’s Venus or the Mona Lisa. Like her illustrious predecessors, her myth will forever be associated to that of a great artist; in her case Mario Testino.”5 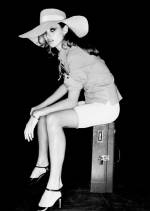