The Hyatt Regency London – The Churchill – has been partnered with Frieze Art Fair since 2008. In an ongoing bid to attract artists and collectors, the hotel has launched a collaboration with the Saatchi Gallery to host a series of exhibitions in its expansive marbled foyer, Montagu dining room, and Churchill bar, as well as to produce a limited edition suite, offering guests the opportunity to live and sleep amongst works from the gallery’s collection. With the goals of opening up art to a wider audience and exploring how different pieces can work within a non-gallery situation, the project has certainly created a stir among the hotel’s guests.

The works included in the inaugural exhibition, One Giant Leap, range from the monumental (Martin Honert’s hiking giants, Riesen (Giants) (2007), and Christina Mackie’s Figure 1 (2007), a life-sized hippopotamus), to the small-scale but typically discomfiting portraits of Chantal Joffe, including several of past Olympians, relevant for London 2012, to Dexter Dalwood’s sparse but regal imagined interior of The Queen’s Bedroom (1998), equally appropriate for the Jubilee year. Jodie Carey’s centrepiece of flowers, The Daily Mail, Arrangement Three (2005), intricately crafted out of newspaper stained with coffee, tea, and the artist’s blood, is less apparently a temporary work of art, fitting, as it does, into one’s expectations of a restaurant’s décor, and, indeed, all of the works have been so carefully selected and placed that they could easily have been commissioned just for this location.

Around the corner in the gentleman’s club-style bar, works in the manner of Old Masters have been chosen, including Claire Pestaille’s subversive renderings of well-known 19th century portraits, David Ording’s collage-style paintings of works by Velazquez and Rembrandt, and Johnny Spencer’s comic Winston Churchill as a Painter (1995-96), which reproduces an interview between a former RA President and the hotel’s namesake, in his role as artist.

The highlight, however, is the limited edition suite. Every detail has been modified, from the choice and arrangement of fruit, to the furniture on loan from the Republic of Fritz Hansen, to glasses and cups designed by Scandium. The bookshelves are filled with Saatchi Gallery catalogues, and the walls are hung with some 15 works of art, including Rafal Zawistowski’s thickly layered, neon pink Judas (2011), Steve Bishop’s taxidermied Jean-Paul Gaultier – Classique (Arctic Fox) (2008), and Ronin Cho’s somewhat alarming interactive knocking door, We know this but we just don’t know how to show it (2011), upon which a mechanical arm raps loudly as the unsuspecting guest approaches. Most impressive is Celine Fitoussi’s bathroom, entirely tiled with around 2000 bars of perfumed soap, echoing cracked bricks and stone, and offering both a visual and olfactory experience.

This is the first time the Saatchi Gallery has worked together with a hotel, and the collaboration certainly challenges established ideas regarding how and where one ought to experience contemporary art. This, however, is a large part of the gallery’s ethos, and, as Director of Marketing Communications at the Churchill, Henny Frazer, says, “with contemporary art, people either love it or hate it, but you always get a reaction.” And when it comes to advertising, any publicity is good. Saatchi, of all people, should know. 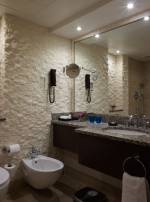