As the Saatchi Gallery marks its 30th anniversary with its first all-women exhibition, a new generation of female artists seems confident about what the next three decades will bring

Things are changing for female artists. For women generally, too, but the art world might just be the place where this first becomes visible. Although female artists are still markedly undervalued at auction, and have been described as “the bargains of our time” by Iwan Wirth (owner of leading international gallery Hauser & Wirth), 34-year-old artist Virgile Ittah suggests that this is the carry-over from last century and that, thanks to the work of their predecessors, young female artists today stand on a much more equal platform with their male counterparts.

Last year saw a series of solo retrospectives for female artists at both Tate galleries in London – Barbara Hepworth, Sonia Delaunay and Agnes Martin – and women are increasingly taking lead roles as gallery directors, curators and collectors, changing the way that contemporary art history is being written. To celebrate its 30th anniversary, the Saatchi Gallery is hosting its first all-women exhibition, showcasing the work of 14 emerging international artists. The exhibition is described not as offering “an overarching vista of female artistic practice”, but rather playing “an important role in approaching issues of the glass ceiling that applies to the art world as much as to the world at large”. Whether or not this ceiling has yet been smashed remains to be seen over the next few decades, but judging by the confidence that imbues the works on display, this generation of female artists is certainly on the up.

The exhibition’s title, Champagne Life, is taken from an ebullient work by Julia Wachtel, whose painted-over screenprints fill the first gallery. Influenced by Andy Warhol, her works respond to the blossoming of celebrity culture and each grainy, pixelated image is overlaid by a cartoon character, drawn from a greetings card. The titular work comprises inverted images of Kim Kardashian and Kanye West, with interposing plastic sculptures of Minnie Mouse, questioning, perhaps, who or what is more real. The title itself comes from a song by American R&B artist Ne-Yo, in which he speaks of “dreams and reality” being “one and the same”.

Soheila Sokhanvari blurs this distinction entirely with her taxidermy horse, Moje Sabz (2011), uncomfortably straddled atop a blue balloon, while, across the gallery, Mia Feuer’s Jerusalem Donkey (2015), the result of a series of workshops with children in Palestine, lies prone, hoofs tied, a jarring symbol of suffering. Animals also appear in the work of Stephanie Quayle, whose life-sized Two Cows (2013), modelled out of clay, breathe a tenderness and damp earthiness into the upper gallery.

Life and movement certainly abound in Mequitta Ahuja’s vibrant paintings on canvas, paper and vellum. Figurative and narrative, the seven large works appropriate ancient mythology, blending it with autobiography, and presenting it in a deeply layered format, with elements of mosaic and gilding. Jelena Bulajic’s paintings, on the other hand, restrict themselves to a grisaille palette, in their painstaking, photorealistic representations of elderly ladies’ faces, close up and magnified to 270 x 200cm. Despite their faded colour, there is a sparkle to the women’s eyes, bringing animacy to the canvases. Speckled with marble dust and ground graphite, the surfaces of the portraits evoke liver spots and show signs of wear and tear; wrinkles form road maps of the individuals’ journeys through life.

With Ittah’s ghostly sculptures, it is unclear whether they are representations of life or death. Made from wax, mixed with white spirit and marble dust, the figures seem to melt and disintegrate as they slip from their respective metal hospital bed frames, one mirroring the other in an uncanny 3D diptych. Gravity is taking its full effect. Modelled on Ittah herself and built up around wire frames, in the same way as Quayle’s cows, the life-sized bodies comprise elements of both self-portraiture of the artist and self-portraiture of womankind, referencing the history of 19th-century female hysteria. The molten forms look fragile, yet there is a flavour of longevity to them, since real bodies can be preserved through the injection of wax. The method of modelling, of building up rather than chiselling away, is nurturing, eschewing the violence of more typically male methods of sculpture.

Alice Anderson’s exquisite, über-sized objects – a 200cm-diameter ball and an even larger cotton reel, wrapped tightly in shimmering copper wire, appearing simultaneously heavy and weightless, warm and cold – are acts of meditative, obsessive and precise mummification, in a way entirely antithetical to Ittah’s. Another grand-scale installation is Untitled (Food For Thought series) (2015) by Maha Malluh – a wall covered in an assemblage of 233 burnt cooking pots and pans. With reference to the pre-Islamic, sixth-century Hanging Poems traditionally hung in Mecca, the artist, who lives and works in Saudi Arabia, explores the utensils’ power as transmitters of cultural meaning. Used throughout the Arab world, the pots take the place of photographs in a family portrait, representing bloodlines across time and space, and traditions passed down orally through the odes.

Seung Ah Paik’s canvases are equally impressive in their wall-covering capacity – perhaps, some might say, “masculine” in their scale – and, like Bulajic, the Korean artist does not flinch from the intricate representation of wrinkles, dead skin, scars, callouses and cellulite. These artists’ representations of the female body are far from the idealised nude, but they are beautiful and alluring in their own right. Painted in pigment, with a bleeding effect around the edges, the boundaries of Ah Paik’s flesh are uncertain and touch on abjection: that Kristevan indistinction between the self and other inherent to women – to the mother.

While readings like this, dependent on the gender of the artists, are both interesting and seductive, however, I wonder whether they are always entirely necessary or appropriate. Does female artists’ art necessarily draw on their experience as women? Of course, all artists’ work is influenced by their autobiography, but it is a disingenuous fall-back to automatically impose gendered readings on female artists’ work.  More often than not, this does them a disservice, detracting from their value, which earns them the right to be seen purely as artwork, by AN Other artist, whose gender remains unspecified.

The curation of the Saatchi Gallery’s show is clean and non-didactic, offering the viewer the chance to appreciate the works as they are, without foisting autobiographical detail or academic interpretation on them. This is a rare opportunity and should be enjoyed. Whether Ittah’s evaluation of the status quo is accurate or optimistically positive still lies, therefore, to a distinct degree, in the hands of those of us who visit, to view, discuss and evaluate exhibitions intelligently, avoiding the trap of myopia and the use of simple, but outmoded, discourse. If we refer to the fact that a work is made by a female artist, when we are discussing and analysing it, let’s be sure that the rationale for this is just and not merely highlighting something we consider worthy of note for its anomalous nature. By the time the Saatchi Gallery turns 60, will there still be a need for an all-women show? Dare to dream that maybe not, for that dream may become a reality! 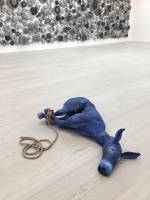 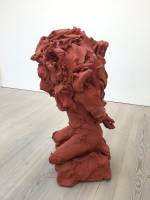 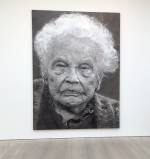 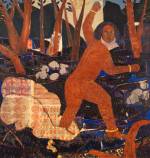