Peder Balke is a little known 19th-century Norwegian artist. The National Gallery and Northern Norway Art Museum, Tromsø, hope to change that, but is he really a forgotten great?

It is the fashion to assign 19th-century artists the title “forerunner of modernism”. It is a difficult temptation to resist. As we hurtle further into the 21st century, perhaps we feel a need to construct creation myths around a comforting and persistent art form that marks the beginning of the world as we now recognise it. Like the Old Testament prophets and pagan sibyls on the ceiling of the Sistine Chapel, these proto moderns predicted the radical changes that were afoot. There is a strong argument, for example, to suggest that JMW Turner’s late experimental works pre-empted impressionism and abstract expressionism. But there is always a danger in reading history backwards. Are we placing too much significance on unfinished works and gestural sketches? And is it just hugely anachronistic to believe that the kernels of modernism began to germinate as early as the 19th century? That is a heavily footnoted essay for another time. One thing is for sure, however; claims that Peder Balke (1804-87) is a forerunner of modernism, as suggested by curators of an exhibition of the same name now showing at the National Gallery, should be taken with a generous pinch of salt.

Balke came from humble beginnings and was a man with a social conscience; after abandoning hopes of becoming a working artist (around 1850), he concentrated on politics and social housing projects for the poor. But he carried on painting for his own pleasure and, without the worry of landing commissions, he was free to experiment. Balke’s early work is heavily and overtly influenced by Romanticism. This was almost inevitable. Romanticism was a powerful force in the art world at the time as it tapped into the European zeitgeist. Revolution was constantly rumbling on the horizon, nationalism was on the rise, and the age of exploration was in full swing. This turbulent environment meant that the sublime – the all-encompassing and exhilarating fear of natural forces that leads one to forget oneself completely in the face of nature’s majesty – was the ultimate description of the passions of the time. Balke, too, was an adventurous man, more so than most. He was one of only a few artists who ever ventured into the Arctic Circle and went on long, gruelling hikes in the Norwegian mountains.

A pupil of the Norwegian (1788-1857) artist Johan Christian Dahl, Balke aped – as most young artists do – the style of his teacher. He was a competent painter whose landscapes echoed not only Dahl’s but also those of Caspar David Friedrich (1774-1840), with depictions of dark trees in forbidding snowy landscapes, moonlit seascapes and gloomy scenes of shipwrecks. Balke also completed several paintings of the North Cape, in the far north of Norway. One of these, painted in 1845, is a beautiful evocation of one of the remotest regions on the planet. The icy green sea is delicately rendered, but dramatic nonetheless, and the distant snow-capped cliffs sit majestically under an arc of soaring cormorants. Such a painting channelled the prevailing mood perfectly, as the perilous polar regions occupied a whole subgenre of Romantic art. Dangerous and largely unexplored, this was where the spirit of the age found its most alien voice. Arctic exploration was to the 19th century what space travel was to the 20th, with all the resultant fears and excitement.

For the most part, however, Balke’s paintings lacked the refinement of his contemporaries and he struggled to find recognition as an artist. A small work, painted about 1850, depicting a Sami man with two silhouetted reindeer standing under the midnight sun, borders on the kitsch. The sepia browns, sickly yellows and avocado greens make this look like a scene painted in the 1970s. It is not difficult to imagine it hanging in a provincial Norwegian bus station or tourist office. Other landscapes from about this time are gaudy to say the least. Splodged brown-green foregrounds sit in front of acrid-blue mountains. The effect is something approaching the cheap tourist paintings you might pick up on holiday in Thailand.

But then something extraordinary happens; Balke’s style shifts again. His work starts to show genuine signs of originality, combining the threatening tones characteristic of the Romantic painters with his own visual rhetoric. Sometimes these resemble Chinese watercolours with their misty hues and floating mountains that hover like kingdoms in the sky. In contrast, his seas become dark and brooding and Balke’s palette finally harmonises. These paintings bring to mind encaustic art, in the wax-like quality of the paint, but that is an unfair comparison; they are better than that. These are surely his greatest achievements. His black-and-white paintings of about the same time are also full of drama. Barely bigger than postcards, they are bold, monochrome studies of violent arctic seas and startling northern lights.

Balke’s technique varied wildly throughout his career. Sometimes his palette was clumsy and tactless, sometimes it was nuanced and dramatic; sometimes his brushwork was expressive, sometimes it was just heavy-handed. Balke was an artist who never quite found his voice, but his achievement lies in the fact that he never stopped looking. His reputation as an artist sank without a trace both internationally and at home until 1914 when a jubilee exhibition, celebrating the signing of the Norwegian Constitution 100 years earlier, included a retrospective of 19th-century artists. But it has taken longer for his art to reappear on an international stage. Indeed this exhibition, a joint venture between the National Gallery and the Northern Norway Art Museum, Tromsø, is part of a continuing drive to achieve recognition for Balke outside his native Norway.

Balke was a good painter, if not always a great one. But one gets the feeling, on reading extracts from his memoirs that he was a man most people would like to know. He was a modest, conscientious, socially minded, adventurous man. And he was a brave artist, not afraid to experiment. He painted because he loved painting and was capable of producing beautiful and emotive works of art. But is he a forgotten genius? Not really. Can we call him a forerunner of modernism? The jury is out. The best way to view Balke, I think, is as a man who loved nature, whose painting is worthy of praise and whose career, both as an artist and a public figure, was an admirable one. 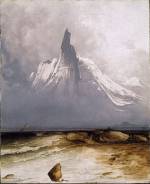 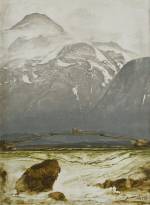