This compact and appealing exhibition is designed to celebrate The Barber Institute's acquisition of Johan Christian Dahl's exquisite moonlit landscape, 'Mother and Child by the Sea'. Dating from 1840, this was probably painted as a memorial to the artist's friend, the great German Romantic landscapist, Caspar David Friedrich, who died that year. An informative and beautifully produced catalogue written by Paul Spencer-Longhurst, senior curator, and published by Philip Wilson Publishers, is available. 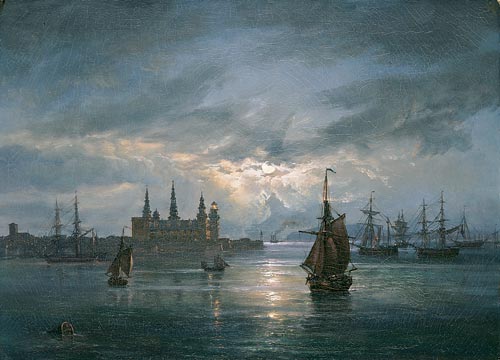 When in, 1842, the German philosopher, Arthur Schopenhauer, wrote, 'The moon is sublime and moves us … because it stays aloof from all our earthly activities, seeing all, yet taking no part in it', he was attempting to define why the earth's silvery night-time companion has held such enigma and allure for mankind, and above all for painters. In an enchanting and varied selection of exhibits, 'Moonrise over Europe' explores northern Romantic artists' preoccupation with the theme of moonlight in the years c. 1770-1860.

Norwegian artist, Dahl (1788-1857), the son of a poor fisherman, quickly outgrew the training facilities available in his homeland, studying instead at Copenhagen and, in 1819, settling in the lively artistic centre of Dresden. A warm and sociable character, he soon met and became friendly with the more introverted and reclusive Friedrich, recording how they once walked together in the park of the Grösser Garten among 'many lovely trees of different kinds, and the moon looked beautiful behind the dark fir trees'.

Friedrich's still, meticulously executed landscapes - products of an art informed by his strict Protestant upbringing and a seeking for the divine in nature - were justifiably famous by the time he and Dahl became acquainted. We are able to see his 'Two Men Contemplating the Moon' (1819), which ranks among his greatest works, and features two rückfiguren, or figures, seen from behind, solemnly and companionably gazing at a young sickle moon from the edge of an old forest. 'Greifswald in Moonlight' (1816-17) depicts the artist's birthplace in Pomerania, on the Baltic coast: bathed in an even, gauzy moonlight, the ancient university town assumes an almost ethereal appearance.

Well before their meeting, Dahl had also painted a number of 'moonlights' and, travelling in Europe, he was in the Bay of Naples in 1821 when Mount Vesuvius was active. Here he painted 'Boats on the Beach Near Naples', where fishing crafts lie at anchor in the calm, shimmering waters with the twin peaks of the mountain smoking and flaming behind. Predictably, after his close association with Friedrich began - the two families shared a house in Dresden from 1823 - he was considerably influenced by him, but his own more spontaneous and painterly style soon prevailed. Clients sometimes commissioned pictures from them both, a tranquil coastal scene by Friedrich to pair with a more stormy subject from Dahl.

In the painting now owned by the Barber, Dahl's 'Mother and Child by the Sea', there are echoes of Friedrich's 'Woman by the Sea' (1818). Whereas in Friedrich's work a woman dressed for the windy weather sits idly watching five fishing boats sailing past, in Dahl's picture, there seems to be a more personal note, with echoes of his own upbringing in a seafaring community, as the mother and small child eagerly await the return of the little ship from the sea. Among 11 of his works on display are a preparatory sketch and a record drawing for this composition, helping the viewer appreciate his working methods. Dahl also commemorated the magnificent Baroque buildings of his adopted city, and a version of his 'View of Dresden by Moonlight' (1838) has travelled from the National Museum of Art, Architecture and Design in Oslo. This small picture, measuring only 18.5 x 34.5 cm, shows the dome of the Frauenkirche and the tower of the Hofkirche dominating the skyline; silvers and deep blue combine to give it a wonderful jewel-like effect, together with a certain elegiac quality, perhaps indicative of the artist's awareness that his long friendship with Friedrich was nearing an end.

Between 1826 and 1850 Dahl made five journeys to his native Norway, receiving an enthusiastic welcome as a painter of renown. In his late 'Fjord at Sunset' (1850), based on studies made earlier, free and adventurous brush strokes represent the cloud-swept sky and broken surface of the water. Here he has moved far away from the purity and intensity of Friedrich's oeuvre.

Throughout the exhibition, the moon appears in many different guises, gleaming brightly as it emerges from behind rocks; casting a subtle, mysterious light; tossing, on stormy nights, among cloudy seas; or outlined in a slender crescent form. The English artist, Joseph Wright of Derby, achieves considerable drama in his 'A Moonlight with a Lighthouse, Coast of Tuscany' (c 1789). As fishermen unload their catch and take down their sail, the moon emerges from behind a lighthouse on a rocky promontory to shine on the oily surface of the water. Two later works look back to a rural, pre-industrial age, when the earth's atmosphere was less polluted: Millet's 'Milkmaid' (c. 1853) employs the glimmering light of a large moon low above the horizon to lend the weary figure a gentle monumentality, while the glorious, gleaming full moon in Samuel Palmer's etching, 'Rising Moon' (1857), reminds us of its once much more significant presence in the night-time sky.

The exhibition benefits from other varied and interesting works, such as the astronomer John Russell's haunting pastel study of a gibbous moon (between half and full moon), made around 1795, which formed part of his own large, topographically detailed map of its surface. Thomas Kerrick's 'Moon Sketchbook', made in charcoal and pastel on blue paper between 1811 and 1818, recorded this Norfolk clergyman's careful observation of the moon in varying conditions and at different phases, pre-dating by more than a decade Constable's sketches of clouds in daytime skies. Fittingly, both German Romantic fascination with the moon and homage to Friedrich's consummately delicate workmanship continue in the final work shown, Arthur Illies' coloured etching 'Ripe Cornfield, Evening' (1896). Here, a slim sickle moon hangs over the waving, finely delineated heads of corn, which is nearing the end of its life and must soon fall to the implements of the harvest.