Chaïm Soutine, who inspired many of the 20th century’s greatest painters, brought the strange and macabre to Paris’s most elegant haunts 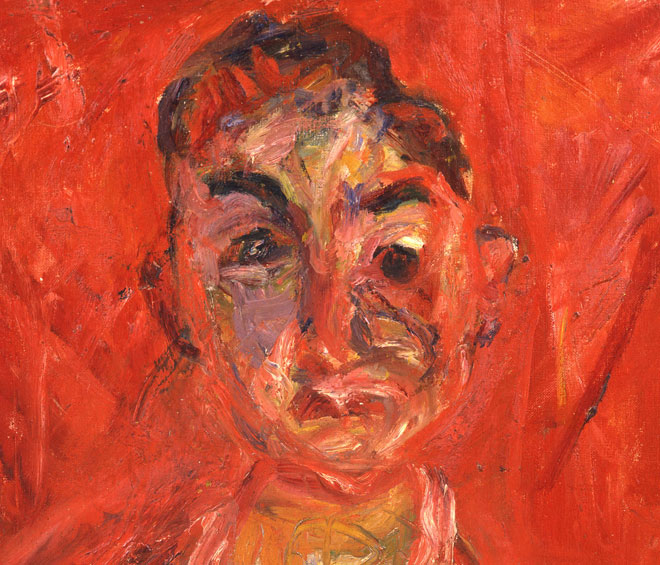 Chaïm Soutine (1893–1943) moved to Paris in 1913, from what is now Belarus, without a franc to his name, but got his big break in 1923 when an American collector spotted his portrait of a pastry chef and instantly purchased more than 50 of the artist’s canvases. Soutine could now afford to stay in the best hotels in Paris, and experience the roaring 20s in style. But he seemed more at home with the service staff. Soutine’s Portraits: Cooks, Waiters and Bellboys is the first exhibition of the artist’s work in the UK for 35 years and the only one to bring together this unique collection of paintings.

Stylistically, this proto expressionist fits snuggly between Vincent van Gogh and Frank Auerbach. Lucian Freud and Willem de Kooning cited him as an influence, and he was a close friend of Amedeo Modigliani –as penniless artists, they lived together in Montparnasse. Another of Soutine’s admirers, Pablo Picasso, attended his funeral after he died, aged only 50, of a perforated ulcer at the height of the second world war. As a Jewish artist of “degenerate” art – as the Nazis would have it – Soutine was forced into hiding, and emerged from his safe house only to die on the operating table. But his art would echo on through the century. 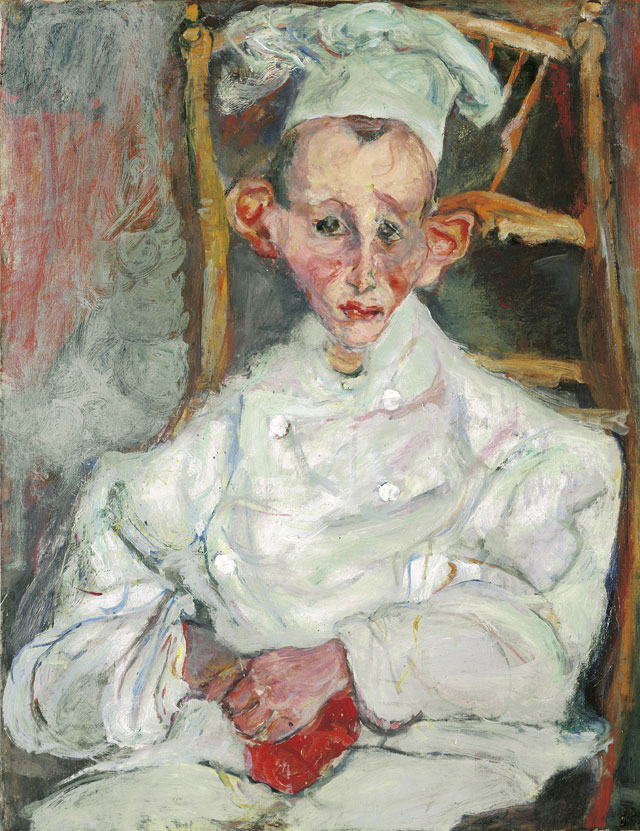 Soutine’s paintings of hotel staff have a quality that is strange and dark, that foreshadows the twisted visages in Francis Bacon’s work. And it is this gothic menace that inspired Roald Dahl to write a short story called Skin, in which a destitute man with a Soutine portrait tattooed on his back is duped by a dealer posing as a hotelier. This poor, aged soul, once a friend of the artist, ends up loosing the skin from his back, and most probably his life, too.

Perhaps Dahl was attracted to the fleshy violence of Soutine’s paintings. Butcher Boy (1919-20) is a good example. Everything is a bright blood red, from the crooked, scowling face and saturated coat, which would once have been white, to the raw-looking impasto background. The first world war had just finished, and this image seems to draw parallels between the butchery of animals and that of humans. Soutine escaped being sent to the battlefields, but the tales of the trenches would not have escaped him.

Soutine’s interest in the meat and matter of life is illustrated by his painting of a carcass of beef, which he purchased at a Paris butcher shop and dragged to his studio. He was inspired by Rembrandt’s Slaughtered Ox (1655) but, whereas the Dutch master’s version of the subject is all sinew and fat, Soutine was keen to represent the bloody, to make the kill look as recent and as fresh as he could. But there was a problem with this. It took him many sittings to finish a work, so every few days he had to throw fresh buckets of blood over the splayed body to ensure it kept its red lustre, much to the understandable horror of his neighbours.

Red dominates this exhibition, too. It fills Soutine’s otherwise non-descript backgrounds and is the colour of the uniforms of the maître ds and bellboys. It even creeps into the faces of his sitters, albeit more subtly than in his early painting of the butcher boy. While that particular portrait is full of feverish angst, others are frightening in their quiet menace. The Page Boy at Maxim’s, painted around 1927, extends his hand, offering us something – sweets maybe – but we are expected to recoil. His eyes are black voids, as though they have been poked out or replaced with unseeing buttons, and his face is a pink concave shard, as if it has been crushed by a weight. Violence has been done to this man, one way or another. 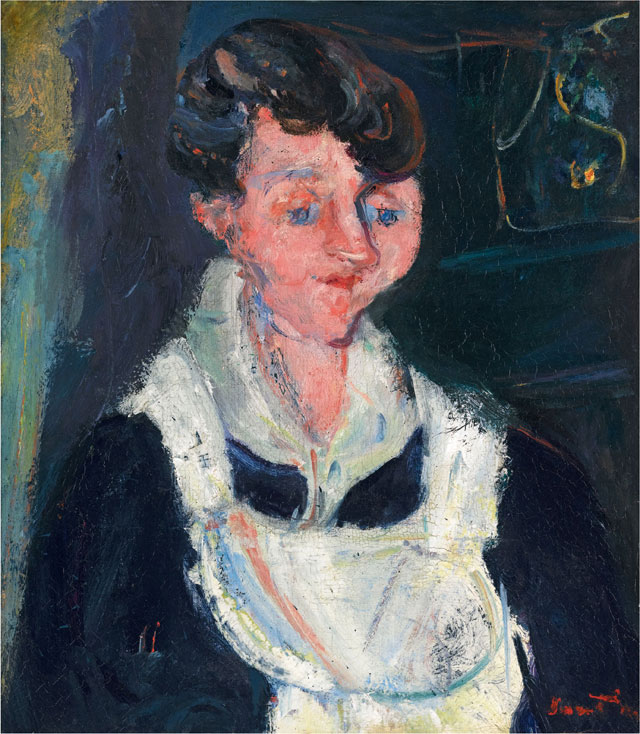 Soutine’s less ghoulish portraits range from sympathetic depictions of shy and benevolent maids (there are only two paintings of women)  to churlish, defiant characters. But every face is misshapen. Foreheads are stretched and cheeks distended, as though viewed in a distorting circus mirror. One woman looks as if she has come out of the dentist’s surgery with a particularly nasty swelling. It is as if Soutine has hastily moulded their likenesses from clay or papier mâché, pulling an ear, pressing a nose, sticking his thumb into an eye socket, and the effect almost amounts to caricature. 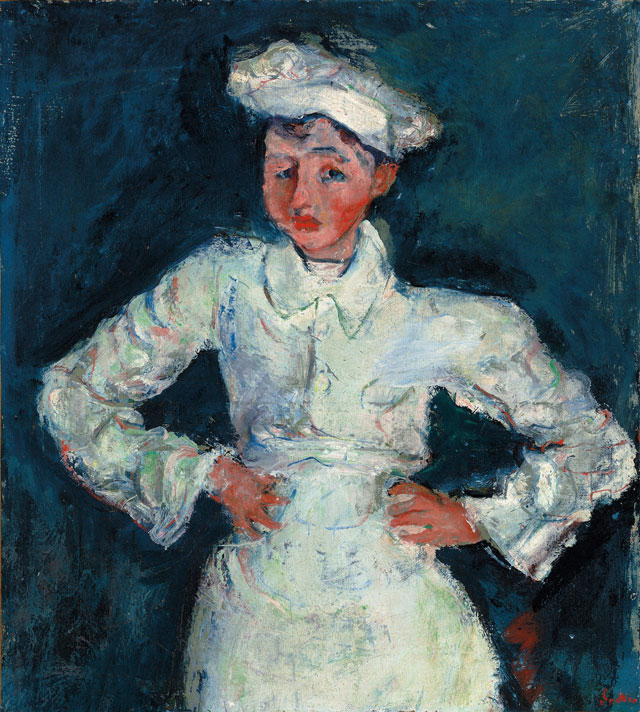 But each exaggeration tells a story. A nervous young pastry cook, a pâtissier, stands holding his hands awkwardly in front of him, perhaps wringing them in nervousness. His jaw is pointed and narrow, and his hooded eyes are disproportionately large, making him appear all the more vulnerable. His nose is rosy and his mouth small and pinched. Contrast this timid slip of a boy with four portraits of a surly redheaded maître d’hôtel (although no one is entirely sure of his job title, as Soutine didn’t note this detail.) His demeanour changes slightly from painting to painting, and certain elements, such as his arms, range from believable limbs to absurdly elastic appendages. But he is recognisably the same person in each. Soutine has captured a likeness and the changing moods of a single personality and no doubt we would have recognised this solid individual as he barrelled through the hotel lobby. But Soutine was not concerned with capturing faces for posterity. He was saying something more.

The biographical information surrounding these portraits remains obscure because these people represent something beyond the individual.. Soutine wasn’t interested in their names or jobs titles, but what they represent. Their moulded features and awkward limbs make them seem like badly constructed marionettes stuffed and sewn into their uniforms and this might just be Soutine’s way of highlighting their servitude. These people are fleshy puppets, he’s telling us, people trapped in their roles. 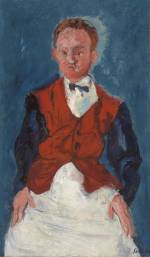