Paintings Past and Present from the New English Art Club

The Magic and Poetry of Everyday Life: Paintings Past and Present from the New English Art Club

The fundamental purpose of a commercial private gallery is to sell art and make a profit. Hopefully, the gallery will also have faith in the quality of what it sells. However, the value of a thriving private gallery sector in a culture like ours is far more than merely economic. It functions as a showcase for new art which might not have yet impacted upon the sphere of museums and public art collections. It can respond rapidly to the perceptive insights of individual dealers, while public collections plod along cautiously in its wake. It can identify neglected areas from the past which have something important to say to the present. Collectively, the private galleries constitute a kind of alternative museum for collectors, students and anyone wishing to acquire a more rounded picture of our art culture.

Messum’s has an enviable reputation in all these respects, to which it has added something else in the form of themed shows which bring together contemporary art with work which illuminates and explains how things have come to be the way they are. The current show traces the evolution of the New English Art Club (NEAC) from its foundation in 1886 to the present day. In addition to 19th-century members like Roussel, Clausen and La Thangue, we find a rich and varied collection of 20th-century and contemporary figures such as Ruskin Spear, William Bowyer and Saied Dai. The show is accompanied, as we have now come to expect from the gallery, by an excellent illustrated catalogue with an informative and scholarly essay by Kenneth McConkey.

The NEAC appeared at a time when British painting was oppressively dominated by the conventions of Pre-Raphaelitism and late Victorian art. The hallmarks of this tradition were a pedantic naturalism, often in laborious detail, combined with anecdotal sentimentality and heavy-handed moralising. Painting, in particular, had to earn its keep by providing us with a sentimental story, a rousing tale from history, or an important principle by which to live our lives.

The principal source of influence which led to the overthrow of this tradition arose from the succession of young British artists who spent at least a part of their formative years living, working and studying in France. Here they came under the influence of Impressionism and then Post-Impressionism. Significantly, the first exhibition of the NEAC took place in 1886, the year which saw the last of the eight Impressionist exhibitions. The new approach to painting which characterised their work was a rejection of anecdotalism and sentimentality in favour of an uncompromising recording of the facts of visual experience, and an approach to picture-making based upon closely-observed tonal values. This did not rule out the ‘poetry’ of visual experience, but insisted that this poetry should arise from the excitement of observed reality, as recorded in forms, lines, tones and colours, and not from a preconceived “story line” to a painting.

This searching approach to observed nature became combined with a will to find pictorial material in otherwise unlikely subject matter. William Bowyer’s The Fishmonger is an excellent example of what I mean. In addition to a striking piece of visual reportage, it makes an abstract design of the highest order, rendered with a thrilling attention to the quality of paint surface. Like all the best figurative art, it oscillates between a vivid record of an event and an enthralling abstract design.

NEAC work did not renounce psychological meaning entirely, but when it appears it is often in a cryptic or ambiguous form. Ruskin Spear, one of the pillars of the NEAC tradition in the mid-20th century, often suggests a kind of tongue-in-cheek irony. His Finding out about art shows a group of adult students standing in a gallery full of abstract paintings and sculpture. Significantly, their attention is concentrated upon one man, presumably a guide or lecturer, rather than upon any of the art works.

Many of the NEAC painters have concentrated their creative attentions upon one particular type of subject matter or the visual character of one specific area of the UK. Fred Cuming’s work, centred around the district of Hastings and Rye, is regional art at its best, capturing the shifting beauty of landscape, sea and sky. Like many of his colleagues in the NEAC, Cuming has a significant presence in the Royal Academy, being elected an RA in 1974. His luminous canvases have lifted the quality of the annual summer exhibitions over many years.

The work of Saied Dai represents the best of the NEAC’s living tradition. The Abstract Painter shows us a tall, white-walled studio. In the middle distance a painter in a brown overall stands in immobile contemplation of an abstract painting, considering his next move. Like all of Dai’s work, it is robustly constructed as an abstract design, much of the surface committed to the rendering of large areas of wall which provide a setting for the subject content. The tonal and colour range is masterfully managed to express the sense of form, space, depth and recession. Like most of Dai’s work, the painting is a delight to the eye, capturing the sense of “magic and poetry” in the title of the exhibition – a paraphrase of a quotation from Sickert.

I would urge anyone with a genuine interest in contemporary British art to visit this unique exhibition, which is a joy to the eye and tells us so much about the history of our artistic culture. 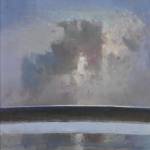 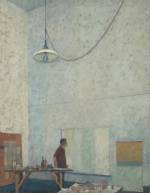 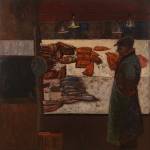