Poets in the Landscape: The Romantic Spirit in British Art

Poets in the Landscape: The Romantic Spirit in British Art

The first works in this excellent exhibition revolve around William Hayley (1745-1820), a poet who today would be labelled as 'minor' by those literary historians whose jobs it is to make such pronouncements. But, as Robert Southey wrote to Coleridge, 'everything about that man is good, except his poetry'.1 Hayley was patron, benefactor and friend to a remarkable circle of Romantic artists and writers.

They included the painters George Romney and Joseph Wright of Derby, the poet Charlotte Smith, sculptor John Flaxman and visionary genius William Blake. Romney's portrait of Hayley shows him with pencil and notebook in hand, looking up as if caught at the moment of inspiration. Yet this portrait, and those of Flaxman and Smith, are eclipsed by Romney’s shadowy, brooding and unfinished 'Self-Portrait' (begun 1784), which shows Romantic introspection at its most powerful. An equivalent blueprint for Romantic landscape painting is provided by Wright’s 'Virgil’s Tomb by Moonlight' (1782), in which the moon appears through soft clouds to reveal a forlorn ruin perched above a chasm.

Blake’s relationship with Hayley was a complicated and not always happy one. Hayley supported him and provided him with commissions, some trifling, such as painting miniatures of his friends, others less so, such as painting the 'Heads of the Poets' for his library, of which Dante and Shakespeare’s are on show here. It was on Flaxman’s suggestion that Blake moved to Felpham, Hayley’s Sussex village, where he lived for three years. Although he described his time there as 'three years slumber on the banks of the Ocean',2 this was where Blake began work on his epic Milton: A Poem (1804-1810), and he later immortalised his Felpham cottage on Plate 36 of the book, which shows an angel of inspiration floating down to him through the trees as he walks in the garden.

Blake felt increasing frustration with Hayley’s piece-work, writing in his notebook, 'When H––––y finds out what you cannot do, / That is the very thing he’ll set you to'.3 His experience of country life stood him in good stead, however, when he was given yet another small commission, to make engravings for Dr Thornton’s 'Pastorals of Virgil' (1821). Although these tiny woodcuts were perhaps an unwelcome distraction for Blake, their imaginative, energetic rural scenes were an inspiration for future artists, and the exhibition traces this particular path through art history, moving away from Blake and Hayley to the pastoral imagery of Samuel Palmer and the Ancients.

Palmer described Blake’s Virgil woodcuts as 'models of the exquisitest pitch of intense poetry',4 and the influence of these dense, dark miniatures can be seen in Palmer’s own pastorals, such as The Sleeping Shepherd (c. 1831-1832), executed in ink and watercolour. The sinuous figure sleeping beside his flock is an emblem of youth and dreaming introspection that is ultimately derived from the myth of Endymion, a young shepherd preserved in eternal sleep by Zeus. The reclining poet was a common trope in earlier Romantic portraits, and in Palmer’s hands the sleeping shepherd joins their ranks, as a member of the rural community who is excused from work and left in peace to dream - not, as with the poets, because of their rank and wealth, but by supernatural decree. Unfortunately, as the authentic rural poet John Clare discovered to his mental cost, society was reluctant to allow such fantasies to become reality.

The influence of a more typically Blakean line on other Shoreham Ancients is clear from George Richmond’s 'The Shepherd' (1827), in which the eponymous subject, an allegory of Christ, leans on his staff to create the sinuous contour of a muscled torso, hip and leg. A wholly different (and unusually pagan) interpretation of the pastoral is given in Edward Calvert’s 'Cyder Feast' (1828), with its couples dancing in bacchanalian abandonment before an orchard press and rising moon. Most of the works in this section of the exhibition are by Palmer though, and although his later etchings such as 'The Lonely Tower' (1879) interpret Milton’s poetry with a visionary intensity that is the equal of Blake’s, his is a vision directed towards a conservative Arcadia of the past, not a radical future Jerusalem. Sleep, evening and rest are the dominant motifs in etchings such as The Bellman (1879), in contrast to Blake’s constant call, as in 'Jerusalem' (1804-1820), to 'awake! awake! awake!'5 Rural poverty is idealised by Palmer as a state of unity with nature in luminous etchings such as 'The Herdsman’s Cottage, or Sunset' (1850).

Jumping forward 75 years, Graham Sutherland’s 'Cray Fields' (1925) repeats the Palmeresque motif of sunset radiating through foliage, in this case in the hop fields of Kent. In the years following the First World War, Sutherland and fellow students at Goldsmiths college, such as Paul Drury and William Larkins, rediscovered Palmer’s prints (he had, like Blake, suffered undeserved neglect), and encouraged by their mentor FL Griggs produced nostalgic, elegiac etchings of rural England. Griggs’ own 'Stoke Poges' (1918) is a beautiful example: it shows a beam of sunlight hitting the porch of the church where Thomas Gray composed his 'Elegy Written in a Country Churchyard' (1768), and in which his mute inglorious Milton rests. Joseph Webb’s etching 'The Shepherd’s Haven' (1929) contains more mystical fire than his contemporaries’ works here, showing a lighted hilltop barn to which a huddled shepherd carries a lamb.

Sutherland’s 'Pastoral' (1930) suggests a way beyond the Georgian sensibility of Griggs and others, towards a more international but darker vision in the looming shadow of the Second World War. This etching marks a watershed in Sutherland’s career, with the Depression ending the demand for prints and the future, in surrealism and abstraction, beckoning. A bare, snaking tree on the left seems to reach out towards an interest in form for its own sake, whilst to the right a second hollow trunk echoes the 'Thunder-Scarred Tree' of Blake’s Virgil engravings. It is as if Sutherland was anticipating Paul Nash’s question about whether it was possible to both 'go modern' and still 'be British', and answering with a tentative 'yes'.

That reply grows in confidence in the first paintings in the exhibition’s final room, which are five preliminary studies and a later finished version of Sutherland’s 'Entrance to a Lane' (1943). Other paintings here respond directly to the war, by expressing a yearning for its antithesis, freedom and peace: John Craxton, Cecil Collins, John Minton and Julian Trevelyan’s works all feature the familiar archetype of a man dreaming in the fields. These visions of imaginative escape are also a form of 'war art', and make an interesting contrast to the better-known commissions of bomb-damaged scenes by Sutherland and John Piper.

The intertwining of poetry and art is a constant theme throughout this exhibition, and here the illustrated books of the 40s show a flowering of Blakean influence during a time of fear, threat and crisis. Two lithographs from different issues of Poetry London have Sutherland and Ceri Richards interpreting poems by the seventeenth-century poet Francis Quarles and Dylan Thomas respectively, with the hand-written texts and Richards’ brightly-coloured tendrils especially recalling Blake’s book works. The darkly energetic illustrations made by Keith Vaughan for an edition of Rimbaud’s Un Saison en Enfer (1949) present another extraordinary vision, of pale figures crouching amongst smoky, ruined cities; a style which owes much to Sutherland’s earlier illustrations of the surrealist poet David Gascoyne’s Poems 1937-42 (1943).

Of the literary-artistic publications featured in the exhibition, Horizons and New Writing folded in 1950, with Poetry London being sold a year later. But they had provided a focus for new art and writing, and the rediscovery and appreciation of artists such as Palmer, at a time when the struggle against fascism was cultural as well as military. In one of his catalogue essays, Simon Martin addresses the question of whether Neo-Romanticism, as it later became known, was a reply to fascist Neo-Classicism. He quotes Kenneth Clark, head of the War Artists’ Advisory Committee: 'Romantic painting, however popular, expresses the revolt of the individual. [Its] inspiration is outside State control.'6 As cultural horizons opened up again in the post-war years, romanticism gave way to pop, and dark, flashing scenes were replaced by primary colours. Nevertheless, the end of the exhibition leads back into a room where Colin Self’s 'Waiting Women and Two Nuclear Bombers' (1962-3) serve as a reminder that this new age was also underscored by fear, born of the threat of nuclear annihilation. ‘Poets in the Landscape’ is a treasure-house for anyone who revels in the arts of the imagination, and it rightly celebrates the work of those who, to paraphrase Blake, kept the divine vision in time of trouble. 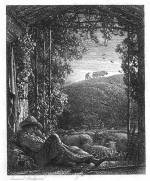 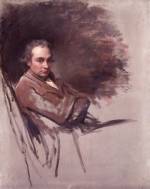