Joe Winkelman is one of the UK’s leading printmakers, specialising in intaglio since 1975. From 1989-95, he was president of the Royal Society of Painter-Etchers and Engravers (now known as the Royal Society of Painter-Printmakers). Winkelman came to the UK 45 years ago from America to take up a place at the Ruskin School of Drawing and Fine Art, Oxford.

After studying English literature at university in the US, he spent two years teaching in Tanzania with the civilian Peace Corps, part of the then newly launched initiative by President Kennedy to encourage graduates to volunteer to serve in developing countries. By his late 20s, he was keen to accelerate the acquisition of skills, and the Ruskin course with its emphasis on drawing and painting from observation was ideal.

His decision to study in the UK was prompted, in part, by his opposition to the Vietnam war and his involvement in the civil rights movement; work abroad enabled him to avoid the draft but still serve the greater good. After working in Africa, he found that he felt more of a citizen of the world than of a single nation, whose morality on the issue of the Vietnam incursion he questioned. Indeed, he took exception to the fervent nationalism that had developed there in the late 60s. The year 1968 was a turbulent one; he was hoping to start anew and to take up permanent residence in Britain, in the same spirit that his German forebears migrated to America as a consequence of the 1848 European revolutions. He says: “My paternal great-grandparents had emigrated in the 1850s, leaving behind German militarism, their first language, their Roman Catholic religion and their smoking habit, determined to start anew as farmers in a younger nation. They intended to abandon the culture of the past, to become American, even anglicising their surname to dissociate themselves from Germany during the first world war. My mother’s English forebears had arrived in the colony of Virginia much earlier, during the 18th century. Their descendents migrated west in the 19th century as the nation expanded, first to Kentucky and then Missouri. They were leather craftsmen and farmers in pursuit of employment and, like the German side, they kept few records of the past, or lost them in house fires. They were determined to forfeit all in becoming Americans, having no wish to look back.”

Janet McKenzie: Why did you choose the Ruskin when Abstract Expressionism was in an ascendant position and American culture formed a strong political hegemony in international affairs?

Joe Winkelman: My natural scepticism made me suspicious of what seemed so contrived and rhetorically asserted as that canon dictated by [the American art critic and avid supporter of Abstract Expressionism] Clement Greenberg. For my independent way of thinking, painting huge abstractions was no way to begin. The cultural hegemony that held sway, demanding unquestioning conformity to the fashion that would be slavishly followed, was anathema to me. What appealed to my common sense instead, when beginning my basic training, was to obtain solid grounding by seeking instruction in fundamentals provided by practising artists in the European studio tradition, and having time to find my own way. I reasoned that it was the way the great masters trained and it made good sense for me to do so as well. I believed that an artist’s gift is in his own vision and individuality, which should be nurtured rather that manipulated or destroyed.

JMcK: Drawing from casts, the life model, buildings, nature formed the crux of the course at the Ruskin. Did you start etching while still a student there?

JW: It took me more than three years to acquire an understanding of what good drawing is and to gain some skills at it. We learned through observation, first drawing from casts of the Elgin Marbles and ancient classical sculpture in the Ashmolean Museum galleries, and then from the life model, from still life, from landscape and the built environment, to gain proficiency. Unfortunately, there were no facilities to make etchings at the Ruskin at that time.

When I completed my Ruskin course, I set up a studio to carry on painting, and my wife commuted to Oxford. Having decided against taking a postgraduate printmaking course in preference to teaching myself, I searched for a platen press to experiment with making relief prints from wood and lino blocks. Gradually, I spent a greater portion of my time making prints on a Columbian press that I acquired as scrap from a Yorkshire engineering firm, trying with some success to get my work shown in galleries. After a few more years of practice, I purchased a copper-plate press to learn the intaglio process, which, because of its technical complication, required considerably more trial and error in order to become proficient.

JMcK: I associate poetry and metaphysics with your portrayal of nature, yet you started as a portrait artist. How did you make the shift?

JW: The vanity of patrons and sitters finally put me off the pursuit of portrait commissions entirely. Instead, I felt more comfortable and personally successful when focusing my work on landscape, making relief prints and then etchings on that theme as I gained further skills.

JMcK: Can you tell me about the importance of poetry in your creative life?

JW: When reading English literature at university, I was taken by William Blake’s poetry particularly, which led to the discovery of his visual imagery. In his poems, there were economic constructs of words that conveyed his sentiments very succinctly, which fascinated me because the notions conveyed could not have been rendered better in prose or in any other literary form.

I had written a thesis for my English degree on the poetry of Wilfred Owen and I was spellbound by the first world war poet’s message of the futility of war. It was timely at that moment when that lesson engendered the sentiment to avert self-sacrifice in Vietnam in becoming a soldier for a hopeless cause. I found solace in the several war poets’ warnings that provided salvation from danger that convinced me to follow their example of resistance, focusing my energies on developing my artistic potential instead of wasting it.

I have produced and illustrated The SewaneePoems with Richard Tillinghast (winkelman.co.uk). Taking passages from his verses, I drew visual compositions on transfer paper to make a set of lithographic prints at the Curwen Studio in Cambridge.

JMcK: If all art is, among other things, an exploration of self, and if art navigates an inner space, then your trees and rocks and mountains seem to me to celebrate the necessity of contemplation and the inexplicable aspects of life. Can you make reference to the Caves at Staffa etching?

JW: I must confess to being romantic, in that my imagery is an expression of my emotional response to nature. I am consumed in observing the natural world and make my etchings with devotion to the subject using my utmost concentration, with what Auden called “intensity of attention”. I like to think that I am stating wonder as well as truths about what I take for my themes. I celebrate life through contemplation of extraordinary natural phenomena that are visually engaging to me. Auden was suggesting that, in other words, this devotion is the utmost expression of love that the artist has for his subject.

JMcK: Are the two of the trees in the Wadham College etching (1998) anthropomorphic?

JW: They are “portraits” rather than illustrations, as I have focused on the particular qualities of their structure and makeup expressed entirely in line, rather than drawing the magnificent trees as mannered icons. Yes, it could be said that the etchings are anthropomorphic, in that I am emphasising particular visual characteristics as I would when drawing a person. I attempt here to convey to viewers the essences of the trees’ “personalities” rendered in their singular appearance, sensitively put down in 2D, as a portrait artist succeeds in doing if he convinces us he has captured something of the sitter’s personality.

JMcK: You employ a forensic analysis of natural phenomena. Can you take an example of one of your works and explain it in relation this to observation?

JW: The etching and aquatint that I made of Fingal’s Cave on the Hebridean island of Staffa near Mull required careful and methodical observation to do justice to its monumental grandeur. Making the plate was virtually a celebration of an extraordinary geological phenomenon that obsessed and fascinated me from the time I first observed it. To understand fully what the amazing island comprises, great effort was made to examine closely the natural qualities that bear witness to the notion that truth can be stranger than fiction. It required going there to inspect the geological formations and study methodically the natural history of Staffa, to record how the basaltic layers of lava must have been stacked up prehistorically, when the caves were formed. Repeated visits were essential to gather enough detail missed on earlier landings on the island. This required, over some years, as a crewmember on a friend’s boat, persuading the captain to stop there en route to other islands so that I could draw and photograph Staffa. I had to climb about on the surface and enter the caves to scrutinise the structure and layout in detail to be able to capture its essence drawn into the large etching.

Finally, in making the plate, enough fact had to be incorporated into the design to make the image convincing. Naturally, I took some artistic licence by exaggerating the theatricality of the composition that might be seen as emphasised for effect in the interpretation. The challenge was to employ a critical variety of marks to convey the essence of the spectacle with enough detail to make it seem real, yet awesomely phenomenal, which is the overall impression it gives.

JMcK: Your career as an artist places great value on perceptual drawing, in contrast to conceptual, ideas-based art practice. How do lines imply movement, space and feelings?

JW: It is difficult for me to accept conceptual drawing as valid – if it has to be explained verbally, in order to be understood. I suppose I feel it necessary to appeal to viewers’ sense of sight formed by living in the natural world, by exploiting our understanding of how light illuminates objects and how that knowledge enables navigation through space, without running into things. Perceptual drawing is a way of creating a system using marks as symbols to create equivalents of 3D space on a 2D plane. With skill, a perceptual drawing can convey a feeling of space by imitating with lines and tonalities the way light falls on solid things. Scale in the drawing can be exploited to appeal to the emotions, and directional marks can be used to imply movement by strokes at angles across a surface.

My drawing is based on perception, but I suggest if individual areas of a work are looked at closely, say with a greater degree of magnification, they appear as abstractions, as much so as any conceptual ones. I refer in my drawing to the code all people develop in their natural vision, whereas conceptual drawings leave all references to imagination sparked by singular icons that may or may not provide enough information for the work to be understood.

JW: Drawing can be regarded as a way of communicating visually rather than by using words to convey ideas and meanings. Graphic descriptions suit some purposes whenever words are insufficient, as between people who speak different languages. Considering that the earliest written communications were composed of runes, hieroglyphs that were pictures of natural objects that became letters of alphabets when developed through use for efficiency, it could be argued that writing is sped-up drawing. 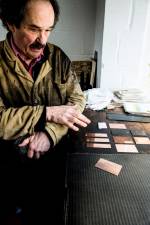