“The witch is dead. Which old witch? The wicked witch! Ding Dong! The wicked witch is dead!” From the evil witch in The Wizard of Oz, whose famous chant was appropriated recently by some celebrating the death of Margaret Thatcher, to the costumes worn by children (and adults) on Halloween, the witch is still very much alive in the modern world as a figure of nightmares, rebellion and curiosity. Witches and Wicked Bodies, the current exhibition at the Scottish National Gallery in Edinburgh, focuses on the modern history of that spectre, charting its artistic representation in the visual arts over the past 500 years.

From Albrecht Dürer and Francisco de Goya to Cindy Sherman and Paula Rego, the development of an archetype is shown in the context of the mainly European artistic movements and cultural sensibilities that shaped it, not to mention the religious persecutions and casual sexism and ageism that also contributed to the construction of the witch. There are many ways to select pictures of witches for a show such as this, but given the gothic atmosphere and religious history of Edinburgh, as well as its setting for Macbeth (both in the play itself and the countless performance each year in the city’s fringe festival), it fittingly focuses on the witch as originally portrayed in Romantic and Gothic drawings and paintings, often inspired by Shakespeare and other literature. Paintings by Lucas Cranach the Elder show dark fables and mythologised fear of sexuality and wild femininity, while William Blake’s The Whore of Babylon shows a monstrosity of Greek mythological proportions. John Raphael Smith’s famous The Weird Sisters from Shakespeare’s Macbeth stars witches who look more like men than women, and Agostino Veneziano’s The Witches’ Rout (The Carcass) embraces the morbid and horrific side of the witch narrative, in a gruesome underworld in which a witch is pulled by a chariot made from a huge carcass.

In most of these representations, the witch is the spectre not just of evil, but of female evil – compounding and encouraging a view of rebellious women as wicked and criminal, and using that myth to explain the otherwise incomprehensible crimes and unfortunate happenings that were as regular in centuries past as today. Even in paintings of witches who look masculine, that maleness is used to show women as being without sufficient femininity, and therefore supposedly flawed and weird.

When viewing these works, and this behaviour, it is interesting to consider the way in which socially constructed stereotypes have been used throughout history to make sense of ordinary events such as illness, economic problems, death and heartbreak. While these days the idea of the witch is generally confined to fairytales and Hollywood movies, the tendency to use a myth or stereotype to exclude some people from society, and to provide an easy explanation for “bad things happening”, is as familiar as ever. Seeing the way in which artists have contributed to this social behaviour (although some, including Sherman, have also used art to comment on it or criticise it) is fascinating, and inspires many questions about the role of art in social cohesion and division, and the interplay between social assumptions and artistic portrayal. Witches and Wicked Bodies is a fascinating and provocative exhibition, in its exposition of that relationship between social stereotype and fine art. 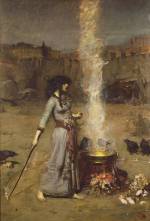