Ron Mueck: Sculptures at the National Galleries of Scotland

Ron Mueck: Sculptures at the National Galleries of Scotland

The National Gallery of Scotland in Edinburgh, in the Royal Scottish Academy (RSA), has mounted a superb exhibition which, for the most part of the festival period, has adjoined the fine exhibition on the work of the late 16th-century miniature painter Adam Elsheimer (also reviewed on this website this month). These miniatures hang separately, but close to the giant sculptural figures by Ron Mueck. Such is the susceptibility of the human mind and psyche to perceived scale, and so deeply divergent are the two exhibitions on first encounter - one miniature, the other gigantesque - that it is wise for the visitor to split the two over 24 hours, and not to impact one with the other too immediately. The Elsheimer show is brilliantly presented. It conveys a benign mood, as if universal realities of four centuries could inform the turbulent atmosphere of contemporary society today. But then such humanist, even spiritual concerns also emanate strongly from the ten works by Ron Mueck next door.

Mueck's parentage is given as German, but he was born in Melbourne, Australia, before his parents, having migrated there from Germany, came back to Europe to settle anew in Britain, continuing as toy-makers, where that German-originated craft background would seem still to be relevant. Mueck, aged 28, spent six months in Los Angeles, and then moved to London where he worked at the Jim Henson Creature Shop, of Muppet Show fame. He soon founded his own production company in London, making props and models for the advertising industry. At this time, he developed the use of fibreglass resin to produce extremely realistic human models.

In 1996 Mueck made his big break, working from that time on as an independent sculptor, by then in his late 30s. The artist Paula Rego included his sculpture 'Pinocchio' (1996) among her own paintings for her exhibition 'Spellbound: Art and Film' at London's Hayward Gallery. Mueck married Caroline Willing, scriptwriter daughter of Paula Rego and the late Victor Willing. She was impressed from an early stage after seeing Mueck and his two daughters creating sand models while on a family holiday in America. So when planning her Hayward Gallery show she had mentioned her need for a Pinocchio model, and Mueck supplied this 33-inch high figure. The silicone figure attracted Charles Saatchi, prospecting at the time for his upcoming Royal Academy show, 'Sensation' (1997). Almost overnight, Ron Mueck was 'made'. Now one can only congratulate both Saatchi and Rego for their very enlightened perception.

The writer, critic, and academic Marina Warner is quoted (Observer 6 August, 2006) as saying that Mueck 'has the quality of a sacred artist', yet working in a secular way. Warner's own special field is religious iconography in art and literature. She claims that Mueck somehow defines the 'holy'. She also claims that his work considers love, as such, in all its ramifications. This is even more evident, it seems, when Mueck works on a small scale. Warner says that 'Mueck takes on the edge of spirit'. Mueck's small team of assistants is highly respectful of his inherent craftsmanship.

The figures now in the RSA rooms do not include his soul-searching 'Dead Dad', which was in the 'Sensation' show. But the other figures dispersed through the RSA's ample rooms (in Playfair's mid-19th-century citadel for art) endow, in all their soulful resonance and magnitude, a profoundly moving presence. 'Ghost' (1998) is a scaled up, pensive yet innocent figure of a young girl. 'Bed' (2005) offers a curiously monumental female figure lying in her sheets; what can she be thinking of, with that slightest trace of a smile? 'Man in a Boat' (2002) has something of a biblical impact, and the found 'boat' in which he sits impassively with arms folded like a bemused apostle could perhaps be marooned on the Sea of Galilee. The 2000 'Baby' reflects the start of life itself and the more recent 2006 newborn baby, 'It's a Girl', seems not yet awakened, still in her mother's womb. The recent set piece of two old women, standing and gossiping, seems to hark back to a Gothic past, perhaps deep in Ron Mueck's genetic memory. (Toy making was essentially the special craft and skill of earlier Germany). There is a long-standing humanism, with its concomitant soul searching.

The figures are seldom life-size, but up to twice that. It is impossible to relate Mueck's figures to any previous artist's work. Nor is there anything particularly Australian here, although the press has made much of that origin. This work springs from a deep European welland, yet is wholly original. The tales of Dean Jonathan Swift, of Gulliver's Travels in Lilliput (the place of miniature people) and Brobdingnag (of giants), or the culture of Grimm's fairy tales sprang from the same historic sources. Mueck's craft and technique are meticulous, and yet this does not overwhelm the subject matter, which touches many hearts and minds. 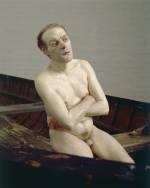