Pamela Phatsimo Sunstrum – interview: ‘I needed to put my own body on the line if I was going to be asking a figure to carry a story or particular politics’

Pamela Phatsimo Sunstrum – interview: ‘I needed to put my own body on the line if I was going to be asking a figure to carry a story or particular politics’

Through multilayered works that merge vibrant female figures with fantastical landscapes, the South African artist, who currently has a solo show at Goodman Gallery, London, is forging more complex and nuanced portrayals of black women 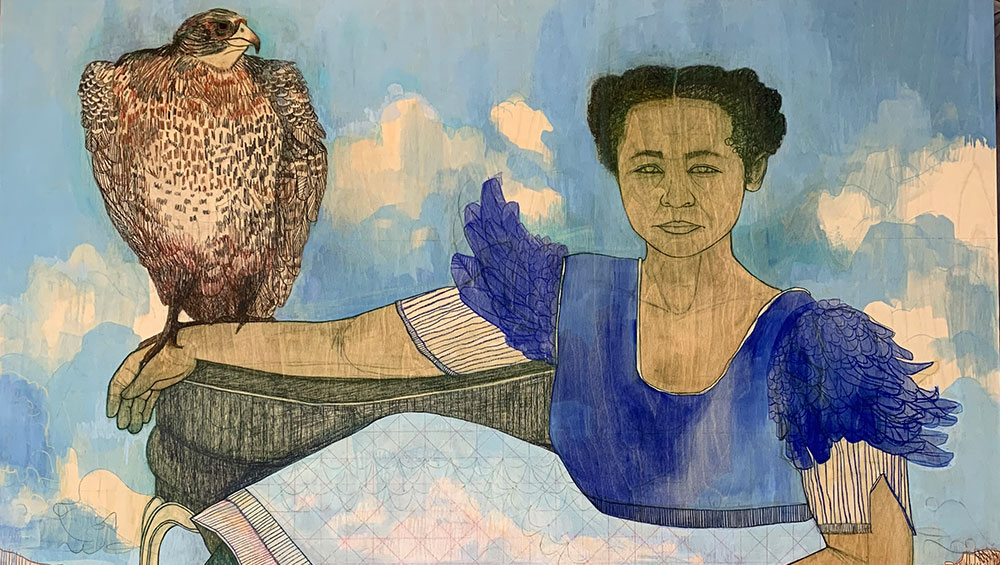 For her first solo exhibition at Goodman Gallery’s new London space, following a show across the road at Tiwani Contemporary last year, Pamela Phatsimo Sunstrum (b1980, Mochudi, Botswana) is presenting a new series of large-scale paintings that draw on classical archetypes; specifically, that of the hero.  She says: “I am interested in the fragility of the hero, the ways in which the hero is both heroic and anti-heroic; both a victor and a perpetrator, who can experience violence, but also cause violence.” 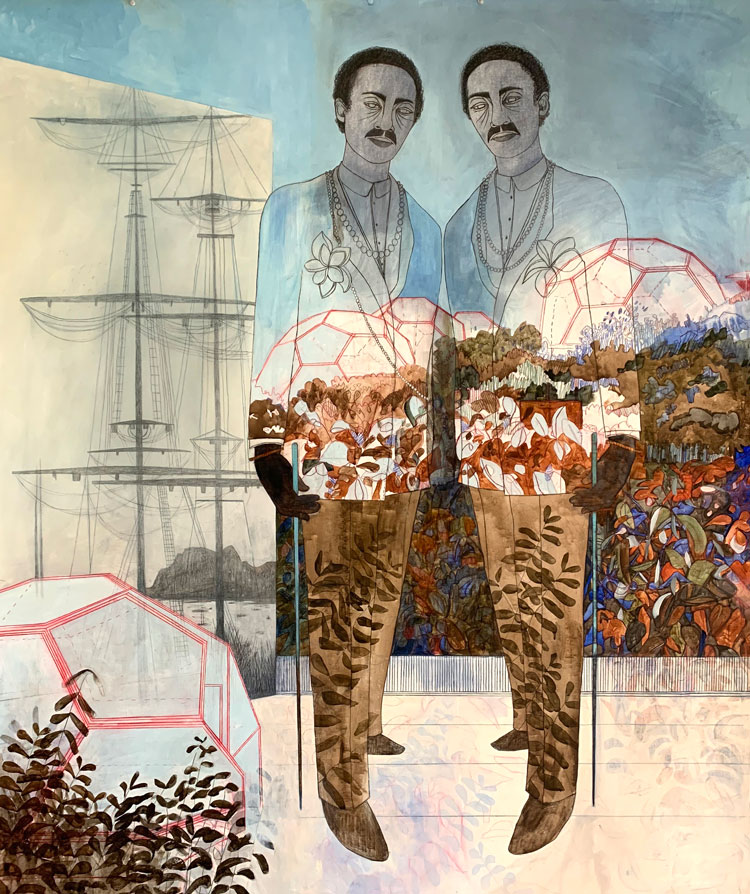 Sunstrum has spent the past decade exploring how mainstream stories, whether historical myths or common representations in the media, have framed the ways in which people have been depicted and understood. Taking the multifaceted nature of identity as her focal point, the artist has created an arresting body of narrative-driven images that specifically relate to what it might mean to be black and female. Having initially turned to existing images of black bodies, found in art historical textbooks and popular magazines, Sunstrum went on to create an alter ago, Asme, who has become a critical component within her paintings and drawings. Through the formation of Asme, as well as a re-examination and translation of established archetypes, Sunstrum has been able to generate her own personal narratives that draw attention to the intricacies of black female identity – reaching past stereotypes and reshaping how black women are made visible in art. 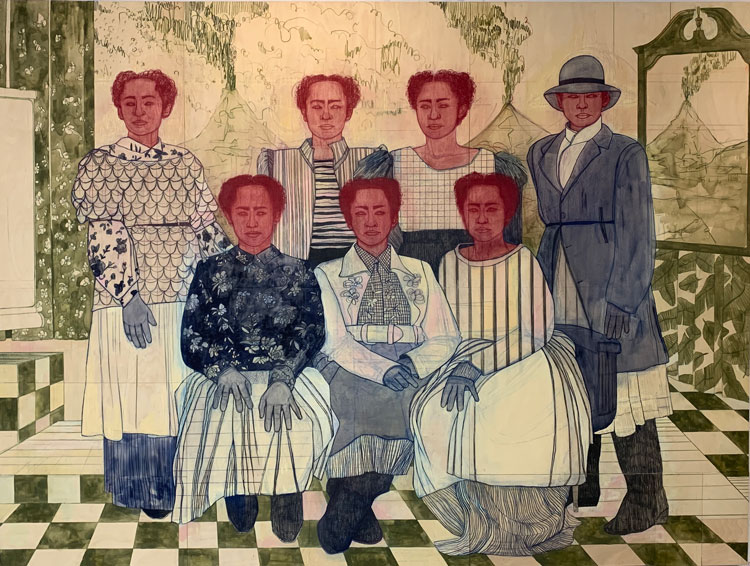 Allie Biswas: The human figure plays a central part in your work. How did this trope develop and what does the figure offer you?

Pamela Phatsimo Sunstrum: The figure has always been an essential part in my work. I think it developed out of an early interest in storytelling and narrative, and also out of looking for images and characters in a practice of collage. So, looking through National Geographic magazines, anthropological textbooks, and ethnographic photography books and through film and cinema, I was trying to use these things to tell new stories. Then came the need to invent my own character, over whom I had a little more control, in terms of how her body was presented or how it took part in the narrative. There was a time when the figure dropped away from my work. I stopped using it altogether for a few years when I was suspicious of how easy it is to tell stories using the figure. Around the time that I first moved to Johannesburg I really started focusing on space and landscape and scientific diagrams, as well as abstraction and other forms of notation, to suggest story or time or space, without relying so much on the figure. Shortly after, I became pregnant, and certainly right after I gave birth to my son, it became impossible not to use or deal with the figure in my work again. The experience of being pregnant, of carrying a child, of giving birth to a child, was truly transformative and had such an impact on my ideas around bodies as vessels – around ideas of history, heredity, genetics, DNA, biology – that it was undeniable that the figure was going to return within the work.

AB: Having initially focused on anonymous people – images you found in magazines; those with whom you did not have any direct relationship – you then turned to yourself. This resulted in you forming an alter ego, Asme, who became an important character within your paintings and drawings. What encouraged this transition to the self?

PPS: I needed to use a body that I had the full right to use. Even though I think this process of appropriation is really common and totally valid in art-making, it became important to me that I became much more specific and much more personal in the ways that I was using the body. It felt like the only body that I had any real right to do that with was my own. I needed to put my own body on the line if I was going to be asking a figure to carry a story or a particular politics . This was a response to a long history of not just the fetishisation of black women’s bodies in academia and art history, in mainstream media and in science, but also as another way of addressing the ways that these bodies are instrumentalised in many different ways when it comes to labour and work and sites of resistance. I felt it was really important that I used my own body as the location or the site, where I could tease out a lot of these issues. 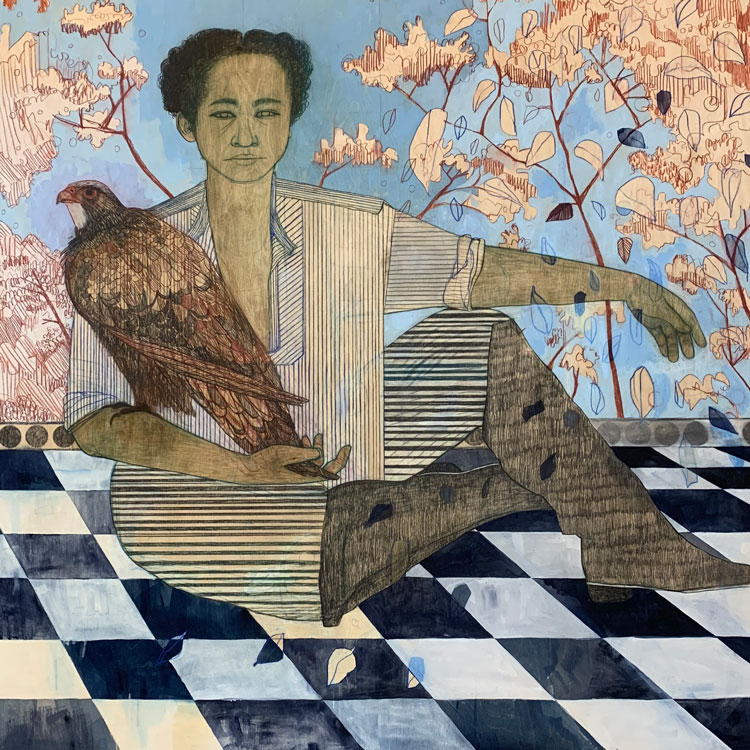 AB: Landscapes play a vital role in framing your characters and setting up a narrative. They are often fantastical in nature, giving the appearance of an imaginary world or alternate reality, whether futuristic or belonging to a very distant past. In works such as the Dioramaseries, the landscape takes centre stage and alludes to the power of nature. Like the conception of Asme, the scenes you create seem to underline your interest in the possibilities of imagination, especially in relation to history. What are you trying to do with these backdrops (and foregrounds)?

PPS: Landscape is used as a way of creating place, of situating the story in a particular, physical space. I know that the landscapes in my work, certain rivers and mountainscapes, and certainly the recurring images of a volcano or the flat arid Botswana landscape, are recurring and start to become really familiar. These are recurring tropes in my practice. I deliberately make those sites ambiguous in terms of time or geography or even history: how long or how short this landscape has supported human life – I try to give a sense of that. Just as my use of the figure and the story is my way of getting to something specific, landscape is also meant to situate and specify the stories I’m referring to. 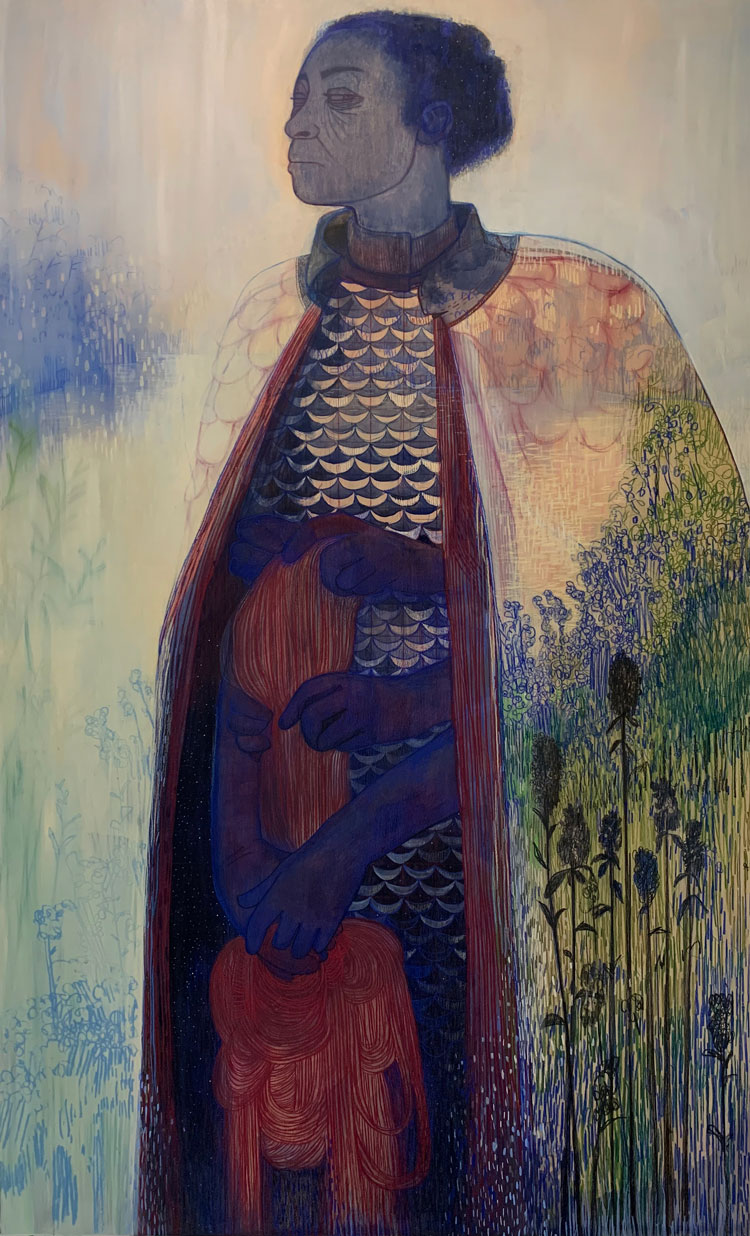 AB: The overall sensibility of your practice seems very much rooted in optimism, of creating change through thought and fantasy (the warm vibrancy of your colour palette seems especially relevant here). You have spoken about imagining and occupying “radical new futures”. Could you perhaps talk more about this notion, in terms of the communality it alludes to (the future of Africa, of blackness)?

PPS: Optimism, for sure. I have written in the past quite a lot about this idea of utopia. I always emphasise it as the idea of utopia because I think that it’s true about what has been said so many times before about utopia – that it is always destined to fail when it is situated in space, and it is only when utopia as a notion, or hope as a notion, is held firmly in our consciousness, and kept out of the real world in structural ways, that we can ever really start to approach utopia. I was recently asked a question along these lines, about buntu or togetherness – I am because we are. This idea that identity, power, selfhood and the political power that comes along with those ideas can never be reduced to a single standing being. My single body is a representative of masses of bodies, whether as community or as ancestry or as collective history or collective memory, of solidarity. This idea that each body can carry many, many bodies; many histories. And many versions of hope for many versions of many kinds of futures. It is a futuristic and very decidedly African philosophy. I certainly make reference to this kind of plurality or multiplicity in my work, the idea of the one standing with, or for, the many, is maybe the last site against the resistance of what we can see today as the result of the toxic individualism that seems to be driving so much of current global politics.

It is impossible to think of yourself alone, without understanding how you yourself fit with a myriad of networks of intereliability and interdependence and intergenerationality. This stands in stark contrast to the self-fortress, or the self-isolated ideas that prop up individualism; that no other life other than your own is of significance, that no other life than your own is worth considering or seeing, even. So I do choose to operate with a belief in a real hope for the future. Not staying in that hopeful state, but enacting change in my life and in my work and in my community, so as to move us collectively, and in hope, in these utopic imaginaries that might be. 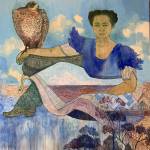