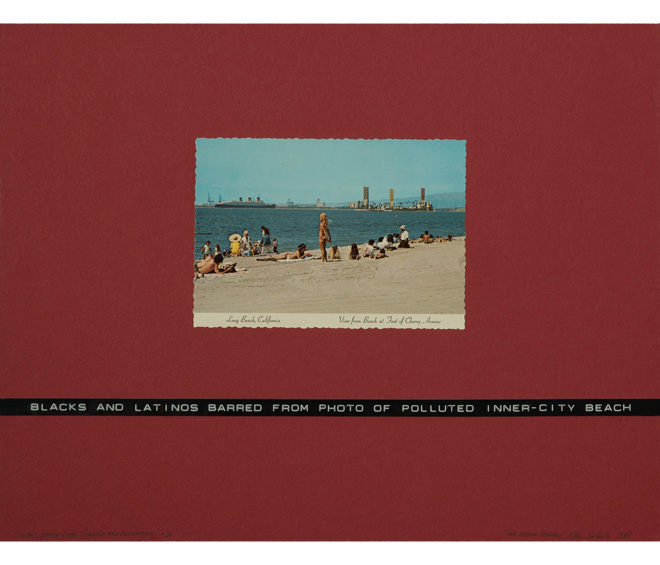 Labour is one of the most significant aspects of human experience and yet it has seldom been among the most prominent subjects of western art. Even during those eras where artists sought specifically to capture everyday reality, depictions of toil remained the exception: for every impressionist painting of sweaty labourers scraping a wooden floor, there are dozens of images of idle society figure, pleasurable landscapes, succulent fruit and giddy dances.

The oeuvre of the American photographer, film-maker and writer Allan Sekula (1951-2013) – now the subject of an exhibition, Photography, A Wonderfully Inadequate Medium, at London’s Marian Goodman Gallery – serves as a corrective to this imbalance. From his early film Performance Under Working Conditions (1973) to the late photograph Eyes Closed Assembly Line (2010), Sekula placed work, and specifically low-paid work, which was his defining concern, at the heart of his practice. 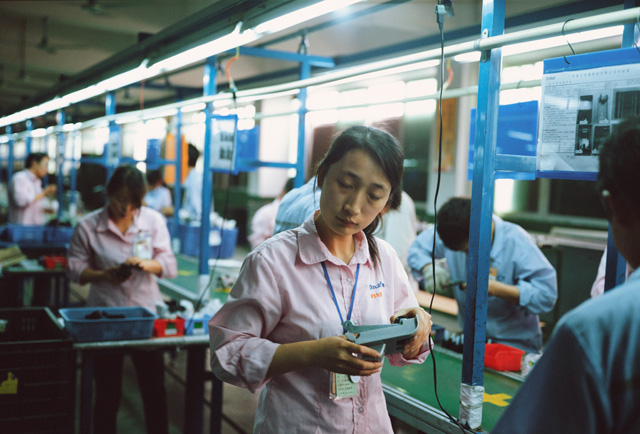 Sekula’s career spanned a period of enormous shifts in working practices, in western countries and elsewhere. In 1973, the year he started out, the US retreated from the Vietnam war and entered the worst recession in its postwar history. By the end of the decade, the process of economic globalisation had begun to accelerate. Labour, which had formed the core of communities in America, was in decline, and being pushed, unseen, to other parts of the world. Sekula, who grew up in Erie, Pennsylvania, and San Pedro, California – two waterside towns grievously affected by these changes – was well-placed to provide an artistic response. 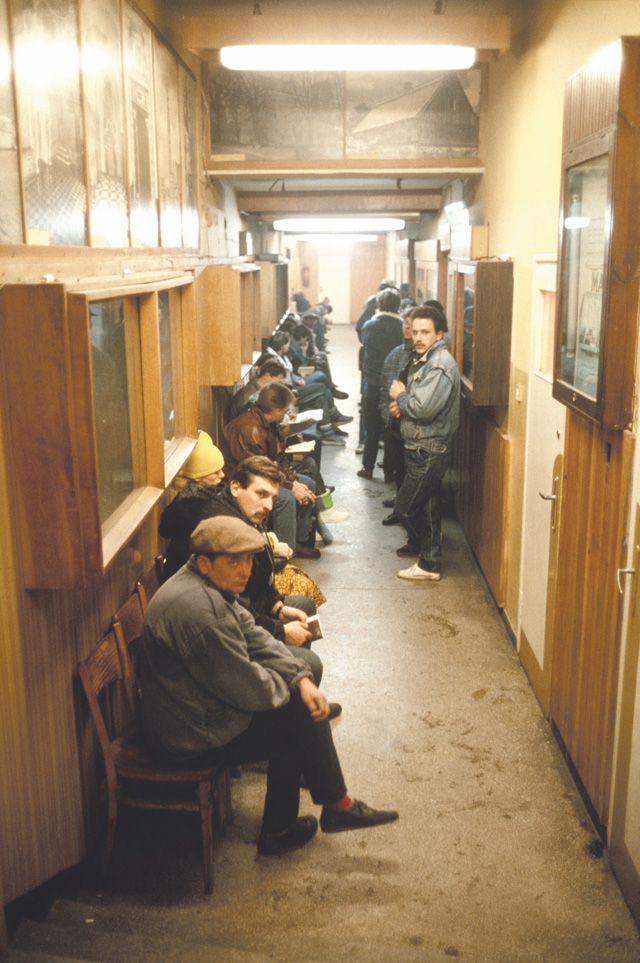 Giving these difficult-to-visualise shifts form was the hallmark of Sekula’s work, as seen most masterfully in his long-gestating Fish Story (1989-95), three sections of which are on display at Marian Goodman. A series of texts and photographs arranged into chapters and presented variously through prints, slide projections and a book, the work charts lives and labour in an international array of fishing ports, from the once-prosperous harbours of Tyneside to the recently post-communist dockyards of Gdańsk, which Sekula visited in an eastward circle across the world from Southern California. It was first exhibited in Rotterdam in 1995, before travelling to Stockholm, Glasgow and Calais, cities unified by a maritime history.

Sekula’s essays, which begin each chapter, are reference-laden and literary in tone, but cogent and anecdotal. They are shorn of the facile theoretical divertissements that render much contemporary writing on art incomprehensible to outsiders. The photographs are all striking, though varied in subject – the queue at an unemployment office in Gdańsk, a welder working on a US navy ship, a man salvaging bricks from a derelict Rotterdam warehouse, to take three examples from the second chapter – and style. There are closeups that almost become portraits, scoping panoramas on sea and on land, and almost everything in between. 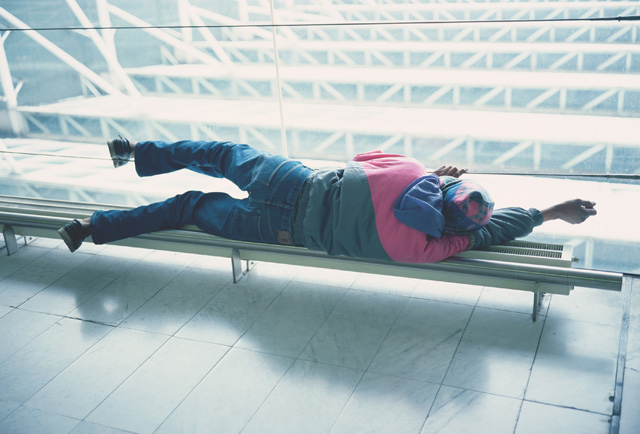 In this way, Sekula disavows any claims of attempted compendiousness, as embodied by the contemporary Düsseldorf School of the Bechers and their students. Combining a multiplicity of images with playful texts disrupts the modernist idea that a single photograph can offer an objective view of its subject, while also laying aside the postmodernist notion that any social insight is impossible to draw from the physical image. This remains a powerful statement on the inadequacies – and adequacies – of photography.

It also makes the case for the artist as documentarian, influencing what the art historian Claire Bishop has referred to as the “social turn” in art of the 1990s and beyond. Although numerous artists had engaged with such issues, Sekula tore away the layers of distancing and puzzle-making, and the obsession with mass media, of much that came before. He returned the real to art.

All of which might make Sekula’s work sound like set of cold, dry exercises, yet it is anything but. Even at his most serious there is warmth and humour. Black Tide (2002-03), a guttering photo-essay showing a clean-up team on a Galician beach engage in the desperate, seemingly futile, task of removing flakes of oil from the sea, also shows moments of camaraderie between the exhausted volunteers. Although they have elected to perform this task, it is itself drudgery. The textual element, a short libretto for an opera (a term that originates with the Latin word for work), references Sisyphus – the legendary Greek king whose punishment was to labour for eternity pushing a boulder up a hill only for it to roll back down again each time. 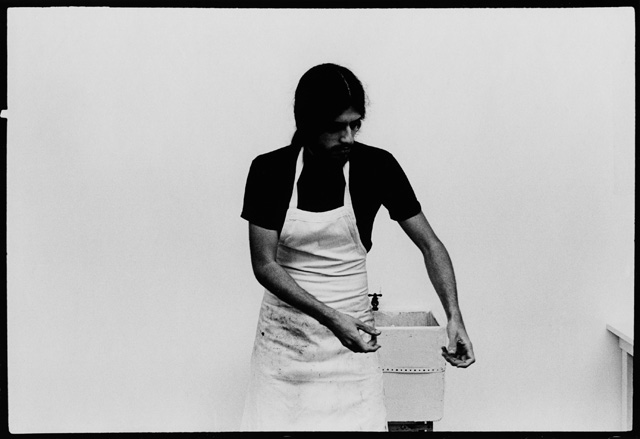 Sekula was unafraid to place himself in his art, but he seldom placed himself at its centre. This Ain’t China: A Photonovel (1974), his first major project to weigh photography, texts, a diagram and viewing chairs equally, is based on his experience working in a San Diego pizzeria. One black-and-white photographic sequence follows a quartet of colleagues, Sekula included, as they determine to unionise and strike, before their plans crumble with the arrival of the manager; another, in sickly colours, shows the culinary fruits of their labour. The texts, presented in English, tell exploratory stories of the workers and their troubled relationship with their manager. Although Sekula is drawing on his life, he turns it into a stand-in for the innumerable others who have worked in such conditions, while managing to avoid becoming coercive in his politics.

The most unfamiliar section of the exhibition is a suite of six early photographic projects, collected under the title California Stories (1974-75), which were not printed until close to Sekula’s premature death from gastro-oesophageal cancer. Often whimsical in appearance, some disguise their political intentions with allusion. Guns & Butter (1975, 2012), for instance, which comprises two photographs of toy planes in supermarkets, references Lyndon B Johnson’s use of the phrase when justifying placing defence expenditure over domestic produce. The literally titled Attempt to correlate social class with elevation above main harbor channel (1975, printed 2011) shows the young Sekula measuring the height above sea level of three houses, the social status of which could be defined as wealthy, middle-income and impoverished. The outcomes may be predictable, but it took Sekula’s particular combination of concerns to notice this discrepancy. 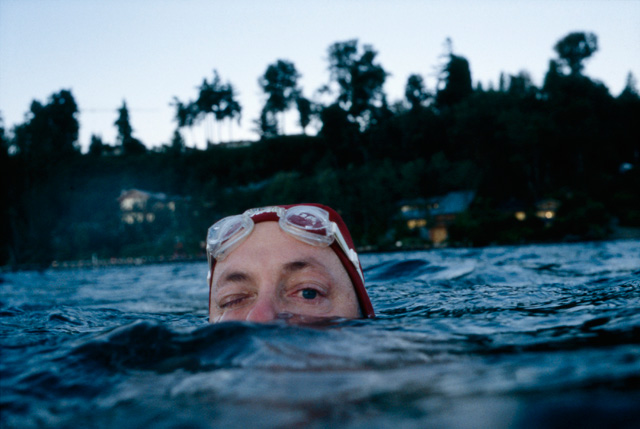 This idea returns in Dear Bill Gates (1999), which shows the artist swimming as close as possible to the Microsoft founder’s house. “I swam past your dream house the other day,” Sekula wrote in a letter to the billionaire, “but I didn’t stop to knock. Frankly, your underwater sensors had me worried.” He takes issue with the billionaire’s purchase, for $30m, of Winslow Homer’s Lost on the Grand Banks (1885). “So why are you so interested,” Sekula continues, “in a picture of two poor lost dory fishermen, momentarily high on a swell, peering into a wall of fog?” The act of struggling against the tide is contrasted with those who sit comfortably above it. Few artists can have depicted this dichotomy with such persistence, intelligence and humour.