Although he may not initially seem to possess the radicalism of his arte povera contemporaries, the Italian artist’s work abounds with mellow fruitfulness and measured contemplation 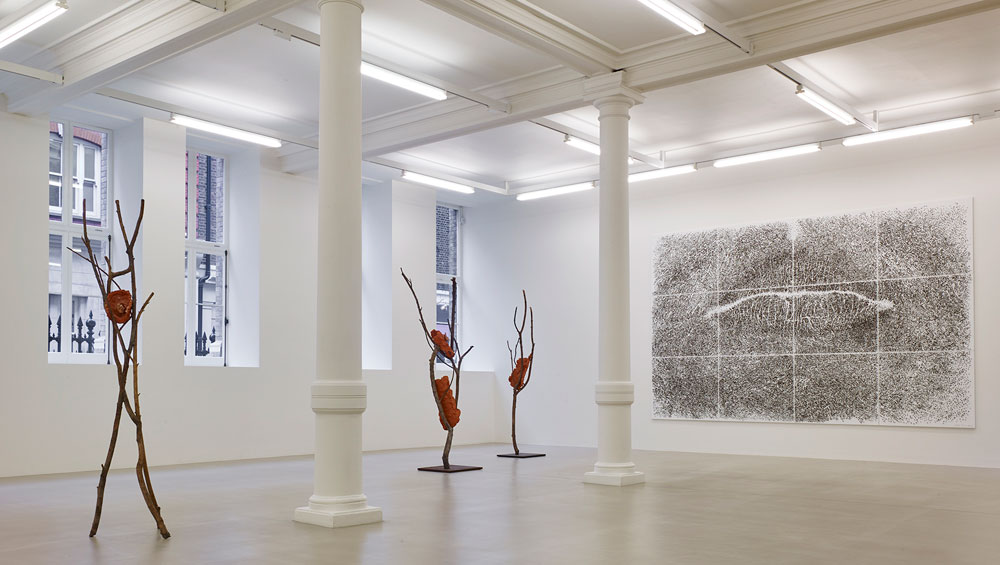 If the surfeit of exhibition openings across Mayfair and Soho, in west London, was not evidence enough, the ground floor of Marian Goodman Gallery’s voluminous London home provides ample sign that summer has passed. The sculptures and installations of Giuseppe Penone (b1947, Italy) – all wood and terracotta, dun and amber – have a distinctly autumnal tone, mellow fruitfulness mingled with a sense of melancholia.

The exhibition Fui, Sarò, Non Sono(I was, I will be, I am not) gathers works by Penone from as early as 1969, although the majority of items are from the past decade. It is paired with a show in Marian Goodman’s Paris branch, Ebbi, Avrò, Non Ho (I had, I will have, I do not have). Although the twin galleries could not be said to offer a wide survey, they do cover a substantial sweep of his interests. The Paris exhibition is nominally devoted to those of Penone’s works that revolve around the physical relationship of humanity to nature, especially those involving his hands; in London, we have works that ostensibly connect humanity to ecosystems in a more metaphysical manner.

These boundaries are more interchangeable than the gallery claims. The 1994 Fingerprintseries of ink drawings, represented in London by five pieces, see diagrams blossom out from Penone’s own finger. Resembling equally an enlarged fingerprint, the splash of a pebble in water and the rings within a tree trunk, they underscore the link between humanity and flora in distinctly physical terms. So, too, do the Trattenere 6, 8, 12 anni di crescita(2004-16), part of the Continuerà a crescere tranne che in quel punto (It will continue to grow except at that point) sequence that Penone has produced since 1968. Created by attaching a bronze cast of the artist’s hand to a tree, and then casting the resultant fusion at intervals, they show an increasing coalescence between hand and trunk. Though the presence of the hand arrests the tree’s natural growth in what seems a corruption of nature, it also allows the tree to grow in a way that would not otherwise be possible. The potential of each element is fundamentally changed.

These works also provide an entry point into Penone’s larger practice, which has always centred around ideas of connection and the use of materials from the botanic world. Born near the Garessio forest in a rural area of Piedmont, Penone has remained entrenched in the region throughout his career. In the 1960s, while studying at Turin’s Accademia Albertina di Belle Arti, he fell under the influence of older contemporaries, including Michelangelo Pistoletto and Giovanni Anselmo – artists who used unconventional materials and forms to create works that replaced the artifice of academic art with simplicity, criticism of traditional social values and an interest in the potential of the everyday. In 1968, after dropping out of his course, Penone presented his first solo exhibition; a year later, he was included as the youngest figure in the art historian Germano Celant’s influential book Arte Povera, which effectively fused many of Italy’s leading postwar artists into a loosely bound movement.

Although Penone’s quietly holistic mission may not immediately appear as radical as that of some of his fellows – Pistoletto’s garbage-strewn Venus of the Rags(1967), for instance, or Jannis Kounellis’s Senza Titolo (12 cavalli) (1969), which called for 12 live horses to be installed in a gallery – his embrace of nature represented a break with modern Italian art’s focus on the city. The fascist-dabbling futurists propagated a paean to industrial and technological momentum, sharp lines and explosive colours supplanting the country’s heritage. And that heritage itself, running from the Renaissance to Giorgio de Chirico, prioritised the city over the countryside. By locating his work in land less obviously shaped by man, Penone was, in effect, rejecting five centuries of paeans to civilisation.

This transgression has, to some extent, diminished with time. In a 2013 interview with the Independent, Penone said: “You can use an old material with a new idea and the work becomes new.” But he has been using similar materials and ideas throughout his career, ploughing the same furrow with a remarkable consistency. It would be difficult to enter an exhibition of his work and be surprised, in the way that one can still be taken aback by shows of his late contemporary Alighiero Boetti.

What has not faltered is his work’s resonance. On first sighting, Spine d’acacia – contatto, maggio (2005), with its canvas scattered with acacia thorns, has the sprawl of a northern Renaissance depiction of a snowy forest, each spike becoming a bare tree sprawled out across a frost-blasted earth. Linger a little longer, and the seeming chaos seems to congeal into a human face, maw impassively shivering out. Just about the earliest pieces in the exhibition, Corteccia(1985) – a series of five terracotta busts of Penone’s daughter – are among the most humane. Each features an enamel daub on a different part of the face, spotlighting the artist’s subjectivity and the fallibility of the senses.

As awareness of environmental problems has grown, and the rise of digital media has precipitated further disconnection from the natural world, Penone’s insistence on the integration of man in nature can unintentionally acquire a more melancholy air. Gli anni dell’albero più uno (The years of the tree plus one) (1969-2013), in which a boxwood trunk is smothered in black wax bearing human imprints, now carries within it a hint of lament. Nature has become silenced, sealed up like an envelope. Respirare l’ombra (Breathing the shadow) (2008) – a vast wall installation in which laurel leaves are caged behind a bronze gauze – is aesthetically beautiful and pleasantly scented, while evoking the notion that the flora has been sealed away for its own protection.

By and large, Fui, Sarò, Non Sono is a show of contentedness. While Penone has spent a lifetime synchronising his form and acts to that of the world surrounding him, his work has gained the still majesty of an unspoilt forest. Marian Goodman Gallery has become a place of quiet contemplation. When the bronze of autumn finally fades to winter’s bare greys, Penone’s warmth will linger. 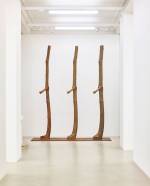