With the new space come two fresh exhibitions and a series of firsts. In the Serpentine Sackler Gallery, the installation Today We Reboot The Planet offers the first UK exhibition of the work of Argentine artist Adrián Villar Rojas. His is the inaugural show at the Sackler space, which is taking on its first public use since it was built as an ammunition store in 1805. Back in the old gallery, the recent work of Arte Povera artist Marisa Merz is presented – her first UK solo exhibition at a public institution.

Among all this novelty there lies a clear agenda: to position the new collective galleries as a site for the promotion of established as well as emerging contemporary artists, and to use these spaces as a means of linking the two. Merz began her career in the late 1960s as the only female member of the Italian Arte Povera movement, which advocated the use of “poor” materials in fine art, as well as the revealing of process and experimentation as a counter to the tyranny of the perfected, painted canvas and the elevated, pedestalled sculpture. Villar Rojas, who is described by the Serpentine curators as being “on the brink of gaining international renown for his dramatic, large-scale sculptural works”,1 operates in the tradition of Merz and her fellow Arte Povera artists in focusing his work on clay and brick, but with a contemporary twist of conceptualism and site-specificity.

To introduce Merz both as an Arte Povera artist and as the only woman of that group is to do something of an injustice to her work as it is shown here (although, admittedly, the gallery press release commits exactly that same crime). This exhibition is about far more than the interplay between masculine and feminine materials and practices – cast iron versus decorative gold, for instance, or large-scale aluminium monuments versus delicate woven copper wire textiles. Merz is concerned, rather, with the opposition, or the adjacency, of figuration and abstraction, and with the parallel practice of exploring diverse media. The result is a call-and-response of the two- and three-dimensional within the same work or assemblage. Faces are drawn and painted on paper and embedded within puckered canvases, some with copper wire overlays; broad wax floor pieces play host to small clay sculpted blobs, dotted evenly about in a sea of off-white; brick, chalkboard and wood are combined with paint to visually explode in the calm, cool space.

Most of Merz’s pieces are untitled and, in their physical presences and contemplative elaboration of the subtleties of colour, texture and space, they voice their own interpretation of the phenomenological world. In his catalogue essay Animating the Essence, Richard Flood reveals that Merz’s recent work has taught him the meaning of silence and of peace,2 and although this exhibition shows Merz’s technical and aesthetic diversity, there is a simplicity at its core: a calm deliberateness to the technique that prioritises the act of looking and questioning.

“There are no heroes; this is a hero-less time,”3 claimed Merz in 2009, and this view is in keeping with the Serpentine show’s atmosphere of contemplation, in which the emphasis lies on the objects themselves rather than outdated notions of artistic genius. Yet Merz’s contemporary work does not seem to emerge from our own time, as such: it is bound up with the negation of heroism, rather than a proposition for the future. Villar Rojas’s installation at the Serpentine Sackler therefore provides the perfect chronological extension to Merz’s conception of the non-heroic in art by prioritising the site and the viewer, while still making reference to two of the older artist’s key concerns: the figuration-abstraction binary and the focus on “raw” materials.

Entry to the converted ammunition store is precarious. Villar Rojas has re-covered the floor with intersecting but unmortared bricks, resulting in an uneven surface and a pleasant plinking-plonking sound as visitors move across the space. An oversized clay sculpture of an elephant crouches in the first room, crushed by the weighty architrave of a disintegrating building. Movement around the structure shows that it is, in fact, not disintegrating, but newly built and undecorated. A building-within-a-building, its grey walls are alternately recessed and protruding in geometric shapes that suggest a post-apocalyptic regeneration project in which only the least tasteful postmodern architectural motifs have survived for use as historical visual homage.

This element of the installation is an exciting and somewhat subversive reference to the renovation of the space into a gallery, highlighting as it does the hybridisation of styles that the Serpentine Sackler itself displays: the original gunpowder store’s red-brick functionality, with its classicised facade, and the organic white plastic and glass extension attached to its left side by Zaha Hadid Architects, 208 years later. Housed deep within Villar Rojas’s post-apocalyptic vision is another reference to our apparent need to layer up and eventually excavate the past. A studio-cum-museum-cum-laboratory lies at the heart of the show, displaying sculptures made by the artist, but presented as if they have been discovered in some future archaeological dig, perhaps another 208 years from now. Plastic bottles and iPods are stuck into clay; potatoes grow from abstract structures; glass and body parts and pieces of cutlery fuse to form hybrid constructions such that even we, as contemporaries of these objects, lose sense of their original purpose.

Within these object-sculptures lies the fundamental distinction between Merz’s and Villar Rojas’s respective realisations of the contradiction between abstraction and figuration. Merz presents a reality that is almost abstract, and an abstraction that is almost real – an uninspiring approach that seems to imply that the two cohabit rather than compete. Villar Rojas, in offering the familiar in its original form but with juxtapositions and within contexts that render them unreadable or alien, allows us to yo-yo back and forth between understanding and complete incomprehension at a speed and with a level of brain activity that indicates how close these two states truly are. With Merz, we move from one piece to another, re-enacting her ideas in fits and starts and with countless dead-ends. But in the damp, hot and musty environs of Villar Rojas’s clay-and-brick boudoir, we live and breathe a history constructed by the artist, but yet to be experienced, recorded, and “heroised”, and by definition unfinished. 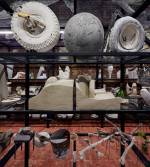 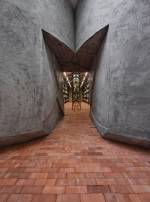