Attention to detail and an open mind are requirements when visiting P.S.1. At once a contemporary art museum and a preserved school building, the space lives and works on many levels (within the creaking wooden floorboards you may discover a small screen playing a video of a woman screaming and burning from below). One of the upstairs bathrooms is covered in wallpaper depicting Marcel Duchamp's Fountain and each stairway has been designed by a different artist. The exhibitions held here ensure that the school building remains in use, allowing visitors to learn new lessons in contemporary art. The gallery space, mostly dictated by the original divisions for classrooms, allows for a constant changing of visions and if one artist is not particularly to a visitor's liking, they are able to move on quickly.

The largest exhibit currently on view includes Manny Farber's new take on the still life. Farber departs from such traditions as the eye level approach to a bowl of fruit or vase of flowers and instead paints collections of a variety of bizarre and normal objects from above. This reversal of convention, although explored by many artists, results in the linking of flattened images through association and line. The artist paints items such as pieces of candy, toy cars and magazine pages, connecting them with other items such as train tracks or rulers. As a result, Farber's works appear map-like in quality, leading the eye in to see both the artificial borders and the overall whole, in bright, vibrant colours. Through this deconstruction of the still life, Farber presents items of personal importance, while suggesting a new way of looking at the ordinary. Although somewhat repetitive in his obvious, self-conscious exploration of the concept, Farber's works are nevertheless interesting.

Several small exhibits exemplify the many functions of the art of photography. 'The Perpetual Moment' features photographs by individuals living on US military bases in Japan's Okinawa archipelago and on the Korean Peninsula. Large-scale images of deformed individuals by Higa Toyomitsu hang across from small snapshots of Japanese workers and American soldiers living side by side. These photographs document the complicated existence of human beings in such an environment and pose questions about the role of the foreign base, interactions between native and foreign workers and the purpose of preparing for war.

In a different project, German artist Hans-Peter Feldmann explores the ageing of the human being with a series of 101 photographs. The portraits are hung in order of age, each capturing a different person aged from eight months to 100 years. At each stage of growth, the frame tells of common attributes associated with that age. Fifteen-year-old Lother stands awkwardly and hides behind his pimply face; 37-year-old Sybille smiles and rubs her pregnant stomach and 99-year-old Ernst peers out from thick glasses, his skin loose and wrinkly. Through these images, general trends emerge - for example, most of the subjects over 65 are wearing glasses. With this work, Feldmann has created an archive of age, compiled from a history of different types of people. This deliberate artistic construct stands in stark contrast to the unexpected documentation of the politics and history of the US bases.

P.S.1 can host numerous, temporary exhibits at any one time, each speaking to the visitor in a different way. It would be difficult to cover absolutely everything on view here, but a final example of the plethora of options available to visitors at the museum is the range of large-scale works by Joan Wallace. These are situated in the last room, before the exit and the wonderful café. Wallace's work, particularly that created during the 1980s, when she worked with a partner, includes pieces, or compositions, widely known and relatively recognisable from established images in Modern art. 'America Flys On', for example, is a set of deconstructed drawers, each with a photocopy-style of Jasper Johns' famous layers of American flags. One of her newest works, 'Piece of Cake', consists of a video screen in a large wooden box with one vertical side painted blue and the other yellow. The film shows a cake, also split into blue and yellow, constantly being sliced, with pieces taken away and than added again, in a constant deconstruction and reconstruction.

With numerous other exhibits on display in addition to those mentioned here, P.S.1 provides its visitors with many choices suggestive of the diverse mediums, concepts and possibilities offered by contemporary art. 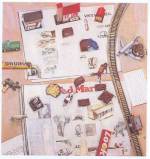 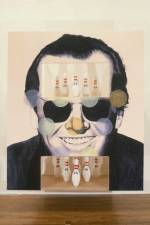