MoMA Sets An Eye On Europe

MoMA Sets An Eye On Europe

In any season, New York City is a magnet for anyone connected with the arts. On the roster for its fall 2006 season, the Museum of Modern (MoMA) in New York, and two of its distinguished curators, have assembled a show that stands out among the many exhibits on view in the city.

To do so, they have roped off a vast area of territory. Pulling their net through the artistic productions of the 1960s to the present, MoMA's Deborah Wye, Abby Aldrich Rockefeller, Chief Curator and Wendy Weitman, Curator, Department of Prints and Illustrated Books, have rounded up a diverse group of artists whose works are not paintings, drawings or sculpture - although many incorporate these mediums or expand their definitions. The works in 'Eye On Europe: Prints, Books & Multiples/1960 to Now' require a different framework. More than 100 artists, collectives and journals, drawn from 20 countries, are separated into six themed sections, rather than chronologically, suggesting that while European artists pursued a variety of means and ends, together their output forms a more comprehensive view of the visual arts over the past 46 years.1

The changes that began to coalesce in the 1960s, in fact, began after World War II and echoed throughout Europe, as the USA emerged dominant in all things, including the arts. From the late 1940s until the 1970s, museum and gallery directors held up American artists as the most desirable, while European artists and students viewed the works of Americans in major institutions in their native countries. Where once artists yearned to be in Paris, the art capital of the world, now they set their sights on New York, which became a locus for the artistic energy of the period. In Europe, Picasso and Miró were still at work, but Avant-garde thinkers had stirred a new generation of visual artists toward the unconventional. A door had been opened for those who were eager to experiment. Perhaps the primary focus on New York allowed the Europeans more freedom. While those in the mainstream had their eyes on America, European artists mined a potent current of their own.

The establishment in 1957 of the European common market was indicative of a wider discourse throughout European society in the post-war years. Economic co-operation became essential to European countries, which alone could not match the successes of American industries. In the arts, co-operation proved to be a rich source of innovation. Restricted by the dictates of the Soviet regime for social realism, many Eastern European artists emigrated to the West and found an inviting ferment among their peers who were critical of the materialistic popular culture. Many alienated artists joined forces, some in the collective 'Fluxus'. This group consisted of an international cast of artists across media. Founded by Lithuanian avant-garde artist George Maciunas (1931-78) in 1962, Fluxus remains active; works made under the Fluxus banner include visual art, music, architecture and urban planning, and design.2

By the 1960s, the American economy and 'instant communication' had become ideals for politicians, industry, the media and advertising. Images and products were aggressively marketed to mass audiences. Artists realised that, while they were troubled by rampant materialism and the growing separation between 'art' and life, they could exploit certain trends to more directly express their ideas, using the same techniques as the marketers. Printed and editioned works were circulated; performances were viewed by audiences and captured on film; and journals offered subscribers a range of additional works through the post.

The first section of 'Eye On Europe', 'Mass Mediums', includes artists whose works mirrored and/or included magazine photography, comic books, posters and pulp fiction. Commercial printing techniques used for such printed matter offered artists great advantages. Mainly used for advertising and posters, screen printing yielded simplified, vibrant images in tune with the times. Pop art, pioneered in the 1950s in England, became a major movement in America later in the decade as a critique and response to Abstract Expressionism. While the name Warhol is inextricably linked to Pop art in the collective imagination, many artists in Europe made Pop art using screen-printing, offset lithography and other means. Groundbreaking Scottish sculptor Eduardo Paolozzi (1924-2005), founder of the Independent Group, did the groundwork for Pop art with his surrealist collages and screen-printed populist images. Others built on this foundation with their own unique expressions; visitors will see examples from English artists such as Patrick Caulfield's (1936-2005) bold, screen-printed 'Bathroom Mirror' and 'Cafe Sign', both 1968, and Richard Hamilton's (b.1922) collage-like 'Interior' (1964); Swiss artist Dieter Roth's (1930-98) surreal 'Hut (Hat)' (1968); and German artist Blinky Palermo's (1943-77) child-like '4 Prototypen' ('4 Prototypes') from 1970.

In 'Language', journals, art books, screen prints, lithographs, record jackets, linoleum cuts, postcards and other works incorporating letters, numbers, symbols and poetry are displayed. Conceptual artists naturally gravitated towards these modes of expression. Art books amplified the space within which an artist could pursue a theme, allowing it to unfold in space over time. For example, Belgian artist Marcel Broodthaers (1924-76) was a poet and bookseller before he began making art in 1964. His books give a visual life to poetic texts; his own (Pense-Bête, 1964) and one by Stéphane Mallarmé (Un Coup de Dés Jamais n'Abolira le Hasard, 1969), for example. Wye and Weitman point out in the catalogue that many poet-artists and conceptualist thinkers born during the 1920s achieved recognition at this time, well into their careers, when conceptual art became more viable with popular printing technology. By contrast, a few younger conceptualist artists achieved success early in their careers using this technology. German artist Hanne Darboven (b.1941), for instance, uses a visual language to express 'nothing'.3 Darboven moved to New York in the mid-1960s. Her early drawings were based on mathematical calculations. She has also explored the calendar format and used patterned language to translate philosophical texts. Darboven's work on view at MoMA was created for and reproduced in the Studio International July/August 1970 issue.

Journals were major sources of art for the masses and began to function like museums and galleries, showcasing artists, reproducing works created specifically for an issue, and offering accessory productions via post. Parkett, for example, was founded in 1984 in Zurich to initiate a dialogue between artists in Europe and the USA. Each issue is the result of a collaboration between artists in different countries. The featured artists are required to create an editioned print, photograph or multiple to accompany the project, and writers are selected to contribute essays and critiques of the works reproduced.

While conceptual art figures prominently in the previous section, it is also evident among the pieces in 'Confrontations'. Provocative works by, notably, French-born American artist Arman (1928-2005), German artist Joseph Beuys (1921-86), Swiss artist Dieter Roth (1930-98) and Polish artist Pawel Petasz (b.1951) are included here. Arman was influenced by Dada and prefigured Pop art with his eccentric use of everyday images. For a show at Paris's Galerie Iris Clert in 1960, Arman installed a mountain of garbage that could be seen through the gallery's shop front window. To announce the show, he designed a trash-filled sardine can that was made in multiples and sent through the post - a truly democratic form of exposure. Beuys was an artistic giant whose creative output included screen prints, postcards and witty multiples (three-dimensional editioned objects). Beuys began working with Fluxus in the early 1960s and was a major innovator of the multiple. All of his works are infused with his ardent political views and strongly held belief in a democratic joining of art and life.

The contrast between conceptual and politically imbued art and works reflecting contemporary materialism is startling. The gap separating the impassioned and the neutral or chilly seems extreme. But the section titled 'Expressionist Impulse' includes work that synthesises the two poles. The development of Neo-Expressionism called for a return to realism. Visitors will see stylistically varied works that fall into this category by such artists as Georg Baselitz, Anselm Kiefer, Francesco Clemente and Per Kirkeby.

In 'Recent Projects' are works that bring the history of modern European art up to the present. Using techniques developed in the previous decades, artists working today are links between their own tradition and the future. Although unique, the expressions shown here are united by a clear sense of confidence, with bold graphics, colors and imagery. For example, Croatia's Ivana Keser (b.1967) makes art in a newspaper format, complete with headlines and dramatic photography. And Annette Messager (b.1943), from France, presents viewers with peculiar visuals (the soles of a pair of feet in 'Mes ouvrages', 1989; a woman's constrained breasts in 'Les Tortures Volontaires', 1974) that announce her own outrage at the brutality of patriarchal society towards women.

For the final section, 'British Focus', visitors must travel to a lower floor. There they will see works by British artists born, for the most part, during the 1950s and 1960s. Wye and Weitman focus on two particularly notable decades - the Sixties and the Nineties - to examine major British contributions to modern art. In the nineties, a group called Young British Artists (YBAs) appeared on the scene. The impetus for this collective of painters, sculptors and conceptual and installation artists came with, first, 'Freeze', an exhibit organised in 1988 by Damien Hirst, and later a series of shows held at London's Saatchi Gallery beginning in 1992. Hirst's exhibit included works by 16 students from Goldsmith College, whose work Saatchi began to collect. Early YBA events were not well publicised, but alternative art spaces began to exhibit their work and, eventually, the YBAs were followed by the popular media. No doubt Saatchi's involvement with these artists drew some attention. Formats seen in previous decades are evident here, but with a twist. There is an overall attitude to this art that is Postmodern, ironic and playful. Etched portraits by Lucian Freud and Peter Howson; whimsical work by Jake and Dinos Chapman, Gilbert & George and David Shrigley; cartoon-like renderings by Adam Dant; abstract works by Rachel Whiteread and Mona Hartoum; and Pop art-inspired screen prints by Michael Craig-Martin join work by Hirst, Peter Doig and David Hockney.

In turning visitors' eyes on Europe, MoMA has given space to images that deserve much wider recognition. The accepted story of modern art has many holes; decades in which seldom-heard names made their own discoveries, expressed personal views and reflected their fast-changing society. By creating such images in formats that expand their reach, these artists invite their audiences to participate in a dialogue. Visitors to MoMA will discover that fully engaging with the works is not only worthwhile but also essential to understand the vast territory that is modern art. 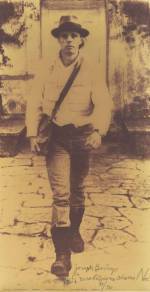 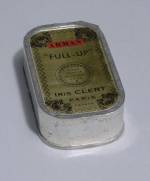 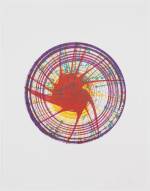 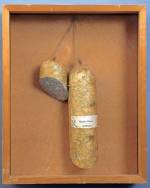