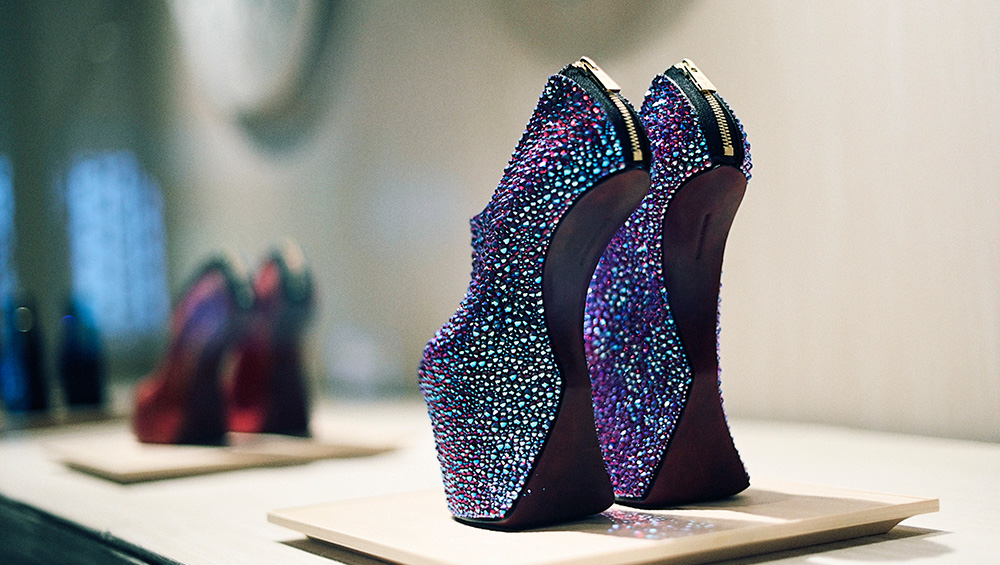 Noritaka Tatehana, whose heel-less shoes have been worn by celebrities including Lady Gaga and Daphne Guinness, is currently celebrating his first solo exhibition in the US. Spanning two galleries in the Portland Japanese Garden – the Tanabe Gallery, located in the Cultural Village complex built by the Japanese architect Kengo Kuma, and the Pavilion Gallery – the exhibition features 50 works, including the now-famous heel-less shoes as well as new pieces created for the show. Tatehana uses traditional symbols associated with Japanese culture and refashions them for a contemporary audience. 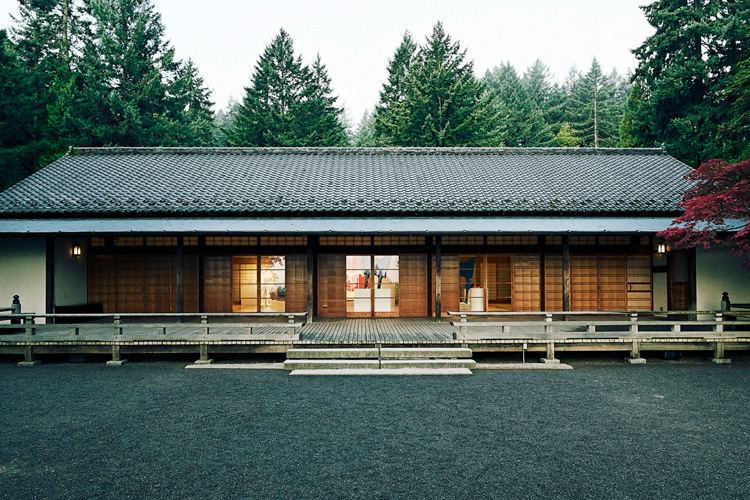 View of the Pavilion gallery from Japanese garden. Photo: GION.

The heel-less shoes, from 2010, are the earliest pieces here and demonstrate the artist’s quest to explore the meaning of the symbols and fashions associated with Oiran, high-ranked courtesans from the Yoshiwara district of Edo (now Tokyo) in the 17th and 18th centuries. Tatehana studied textile-dyeing at Tokyo University of the Arts, one of the oldest university of the arts in Japan. While he was there, he became fascinated with the clothing associated with Oiran, which is very different from the Japanese kimono style that most people are familiar with. He was especially interested in the tall platform clogs, known as takageta, which were the symbol of Oiran. 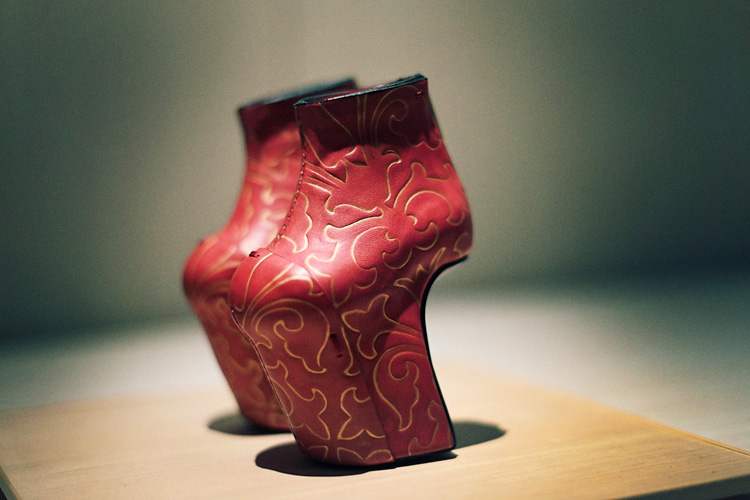 “There were many courtesans until the early20th century,” says Tatehana, “but only the crème de la crème of these courtesans were ranked as Oiran. And only Oiran were allowed to wear the extremely high-heeled clogs, takageta, as their status symbol. Everyone knows this high-heel is torture to wear, but they regarded Oiran who wore these platform clogs with awe. I still wonder how such a custom came about.” Walking in these clogs was not easy and wearing them was a source of great pride. An Oiran’s patron would take her hand to support her, but if she stumbled she would be punished.

“I think an Oiran was the avant-garde fashion icon in those days, the equivalent of today’s top star. I suppose wearing such high-heeled shoes was an act of pride for women, who although masters of arts, singing, dancing and playing musical instruments, still had to be at the service of a wealthy patron,” says Tatehana. “I haven’t seen Oiran in real life, so my shoes are an interpretation of what this enigmatic symbol of Oiran would be like now.” 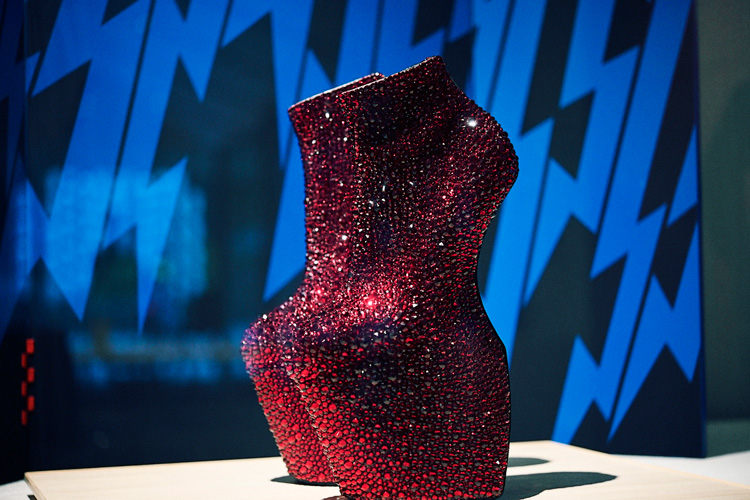 Over the years, the artist has developed variations on the heel-less shoes: some are even more elongated – almost 50cm high – while others are opulently decorated with crystals. Although they are works of art, these shoes are wearable, if uncomfortable.

Now that Tatehana has become known as the creator of Lady Gaga’s heel-less shoes, many people regard him as shoe designer. However, he is an artist. His approach to work has always been about rethinking Japanese aesthetics, and this exhibition illustrates the extensive ways in which Tatehana has expressed himself.

“Fashion nowadays is about changing theme each season,” he says. “Although people treasure some clothes, they are seen as disposable. I didn’t feel comfortable for my creations to be regarded as something that comes from a theme that changes every season and is consumed every season. My exploration lies in the quest for time-proof symbols inherent in Japanese culture and why it became symbolic,” Tatehana says. 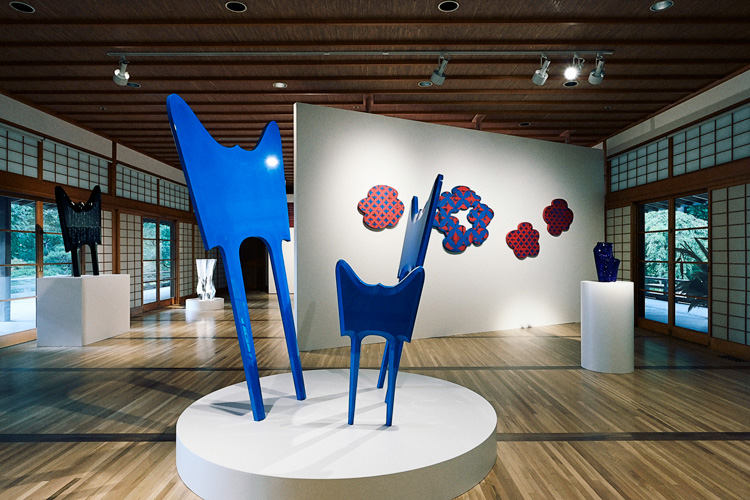 Some of the symbols the artist has been questioning are the decorative hairpins that Oiran stuck in their hair, and the ancient Japanese culture of listening and playing with scents that dates back 1,000 years. Tatehana interpreted these in his own way and made a contemporary expression of the hairpin and a Genji-Ko lacquered panel, which is associated with the historical game of playing with scents. “A designer can hand down his or her legacy to successive creators and continue the brand after the designer has passed away, but I prefer to complete my work myself. When I am dead, that is it – my work will not be produced by anyone else.” But, Tatehana continues: “I am just in the passageway of a long history of Japanese culture. There is the original form of Japanese symbols, and my work is the contemporary expression of those symbols. Future artists will probably express these in a different way. I just wish to express traditional symbols through my eyes.” 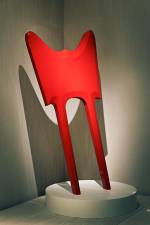 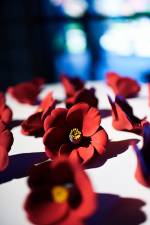 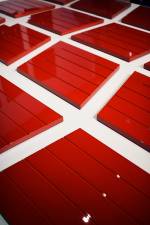