The record, begun in the 1970s, of a 15-year period in Goldin’s life, is grounded in a specific place and culture, yet it is a hauntingly universal and deeply affecting work and, decades on, it has lost none of its immediacy 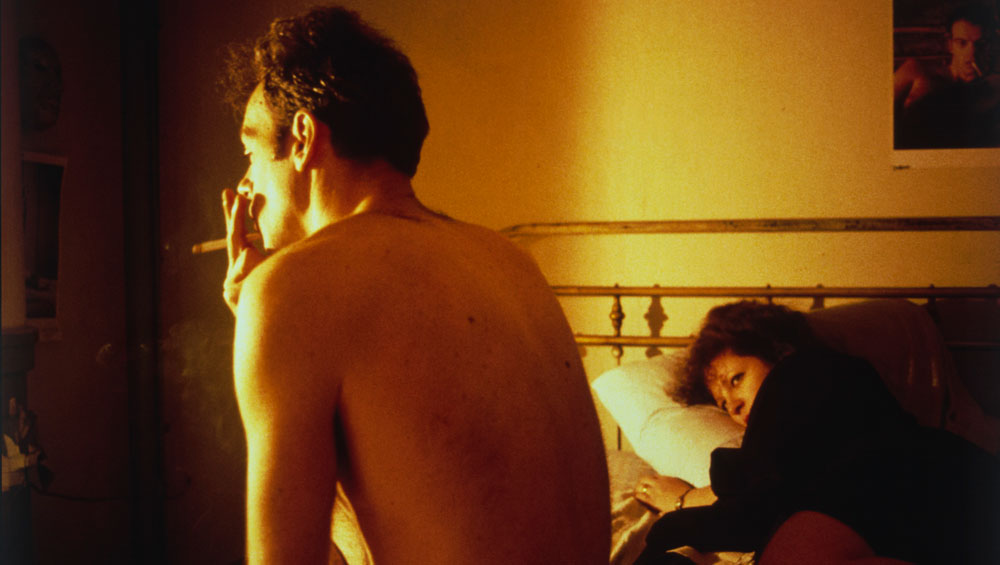 In one of the hundreds of images that compose Nan Goldin’s photographic masterpiece The Ballad of Sexual Dependency, a woman, wearing black lacy stockings, lies sprawled on a bed, only her torso visible. Her black-and-white striped dress is rucked up above the thigh, exposing a purple bruise in the shape of a heart. Simultaneously exuding sexuality and vulnerability, both a private moment and a public display, it is, writes Goldin in the afterword to the book that accompanies the work, an image that conjures several of its major themes – “the dynamics of both love and hate, tenderness and violence, as well as all kinds of ambivalence in relationships”.

Goldin began taking photographs while studying at the School of the Museum of Fine Arts, Boston, in the early 1970s, where her teacher, the photographer Henry Horenstein, introduced her to Larry Clark’s brooding shots of teenage drug use, violence and sexuality in suburban America. Goldin, who was born in 1953 in Boston, left home aged 15, four years after her eldest sister Barbara killed herself, and at 18 was living in Boston with an older man. Soon after leaving art school, she moved to Provincetown, Massachusetts, to live with the photographer David Armstrong and his lover. There she met the electrifying actress Cookie Mueller and her family – her girlfriend Sharon Niesp, son Max and dog Beauty. Goldin chronicled the summers of partying with the town’s drag queen scene – drawn to the strength of their self-determination – on endless reels of film, which she processed at the local drugstore. In 1978, Goldin moved to New York, where she rented a loft on the Bowery in SoHo for a studio: she continued to record, unflinchingly, the daily lives of herself, her friends and family, in stark, spontaneous records of the ecstasy and pain of navigating life.

The Ballad of Sexual Dependency is the record of a 15-year period in Goldin’s life, grounded in a specific place and culture, yet it is a hauntingly universal and deeply affecting work that marks a definitive contribution to both photography and autobiography. Lasting 42 minutes, in the 35mm version currently being played continually at the Museum of Modern Art (MoMA), it is a slideshow of more than 700 photographs, accompanied by a soundtrack, by turns cheerful and poignant, featuring the Velvet Underground, Nina Simone, Yoko Ono, Petula Clark and Screamin’ Jay Hawkins. The title is derived from a song in Bertolt Brecht and Kurt Weill’s The Threepenny Opera. Vaguely chronologically structured, it begins with a series of couples – old pairs standing on their doorsteps, young lovers embracing possessively, even a crumbling wax version of the Duke and Duchess of Windsor gazing bemusedly at the viewer with lopsided smiles. It ends with a series of anonymous gravestones, labelled simply “Mom” or “Dad”; with the open coffin of Mueller, dead from Aids in 1989; and with a pair of skeletons graffitied on a black door, the paint from their white bones running as they stand locked in an eternal dance of passion. In between, we see Goldin and her friends in bars, in cars and on beaches, but mostly at home, as the places of everyday life – bedrooms, kitchen tables, bathrooms – are rendered the stages for Goldin’s work: “a volume of loss, a ballad of love”, as she sees it, now that so many of its subjects are dead.

Goldin’s photographs examine the possibilities of desire and passion, and their propensity either to be productive, as evidenced by a series of pregnant women that transmutes into a series of adorable children, or destructive, as in the scenes of violence she depicts with equal care. The central photograph of the work, in Goldin’s eyes, is Nan One Month After Being Battered (1984), an extraordinarily brave self-portrait in which the artist, having been beaten to the point of requiring extensive surgery by her lover Brian (a major figure in the work) stares out at the camera, part defiantly, part accusingly, part despairingly. The red of her bloodshot eye matches her bright lipstick. Goldin has written that her addictions escalated over this period to the extent that she spent two years at the end of the 80s barely leaving her loft in daylight before entering rehab; the film’s depiction of heroin use inspired Bill Clinton, in 1997, to take a stand against “Dan Goldin”’s [sic] promotion of “heroin chic”. But there is nothing glamorous about these photographs: starkly flash-lit, their immediacy is palpable (Goldin has said that she took some of them so that she could remember what she had done the night before). “The Ballad of Sexual Dependency,” writes Goldin, “is the diary I let people read. The diary is my form of control over my life. It allows me to obsessively record every detail. It enables me to remember.” Goldin flits between moments of communication and solitary exposure, from shots of women gazing into mirrors or out of windows, submerged in baths (baptismal, or drowning); men looking macho in groups, or vulnerable on their own, grown-up versions of the little boy pictured on the street in a Superman costume. “These photographs come out of relationships, not observation,” writes Goldin; the subjects are her “tribe”, a family “bonded not by blood, but by a similar morality, the need to live fully and for the moment”.

The first slideshow was shown in a New York nightclub in 1979 (in early, improvised shows, Goldin would change the slides herself while a boyfriend would DJ in the background); the friends it featured – Mueller and Niesp, Suzanne Fletcher, Armstrong – would cheer their favourite pictures from the audience, and if the projector burned out, audiences would wait while Goldin fetched replacement bulbs from home. It was shown publicly for the first time at the 1985 Whitney Biennial, and published the following year as a photobook; several stills and images from the book, alongside flyers advertising early performances, are displayed in a gallery next to the dark room where the film is shown. Decades later, it has lost none of its immediacy: it is a beautiful, stark evocation of a time and an intimate examination of the ways we construct – and destroy – identity.