Inside: Artists and Writers in Reading Prison

Inside: Artists and Writers in Reading Prison

Since it was founded in 1985, cultural organisation Artangel has made a name for itself staging exhibitions in headline-grabbing locations. Its latest show brings a cast of literary and art-world heavyweights to the cells, corridors and chapel of HM Prison Reading, which closed in 2013 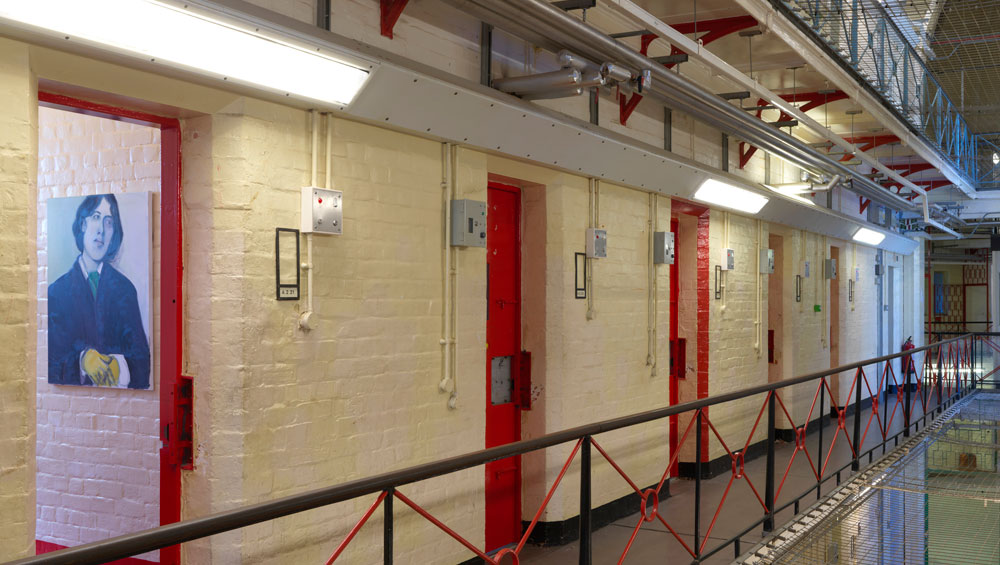 Inside: Artists and Writers in Reading Prison is inspired by the Irish poet and playwright Oscar Wilde (1854-1900), the prison’s most famous inmate. Wilde was sent there in 1895, having been convicted of “gross indecency” for his relationship with Lord Alfred Douglas. It was an experience that produced some of his most poignant work: De Profundis, a 55,000-word address to Douglas, was penned over the course of his incarceration on his daily ration of writing paper. It was also an experience from which he would never recover. After his release, Wilde fled to Paris, where he died three years later at the age of 46.

Even by Artangel’s already grand standards – past endeavours include covering the interior of an empty council flat in blue crystals for Roger Hiorns’s work Seizure (2008) – Inside is an ambitious affair. Visitors can wander through corridors and cells turned into temporary gallery space; texts written in the style of prison letters are dotted throughout; and, on Sundays, actors including Maxine Peake, Ben Whishaw, Patti Smith and Ralph Fiennes will read De Profundis in the prison chapel.

Among the star turns paying homage to Wilde is painter Marlene Dumas, who has produced new works for the exhibition. These include a rakish portrait of Douglas shown alongside a kindly, colourful Wilde, as well as a mischievous depiction of French author Jean Genet (1910-1986), whose semi-autobiographical literature made deeply homoerotic subjects of prison and prisoner alike. The fantasy of the homoerotic convict is also at play in film director and artist Steve McQueen’s sculpture Weight (2016). In it, a gold-plated mosquito net is draped over a prison-issue bunkbed, turning the cell into a boudoir.

As anyone with even a vague interest in contemporary art will know, Chinese artist and vocal critic of the People’s Republic of China Ai Weiwei became a western cause célèbre in 2011, when he was placed under house arrest in Beijing for 81 days without charge. In a short letter, commissioned by Artangel, he writes to his son describing the conditions of his confinement. Ai’s letter is based on experience, but the majority of contributions are speculative. Welsh novelist Joe Dunthorne, for instance, turns imprisonment into a literary constraint, writing a letter in which he restricts himself to the use of only a single vowel, the letter “e”.

Comparing the constraints adopted by free artists and the restrictions enforced on detainees can lead to uncomfortable results. Such is the case with Artangel’s framing of works from painter Peter Dreher’s series Tag um Tag guter Tag (Day by Day Good Day). Since 1974, the artist has been painting the same drinking glass, each work taking a single day. The press release describes Dreher’s studio as “his own cell”. Dreher’s practice may be strict, and his paintings intriguingly masochistic, but a studio is not a cell. To suggest otherwise, given the context, is a rather tasteless iteration of the “tortured artist” cliche.

The thrill of imagining oneself in prison, for those who have never been forced to go there, has a hold on contributors and visitors alike. I stood outside what was once Wilde’s cell, and watched as families lined up to have their photographs taken behind its closed door. In a similar vein, a series of photographic self-portraits by the 2000 Turner Prize-winner Wolfgang Tillmans, titled Separate System, Reading (2016), show the artist looking at himself in a mirror on a prison cell wall.

Tillmans’ photographs, named after a harsh disciplinary system that was in place when Wilde was imprisoned there, illustrate the point at which solidarity ends and self-indulgence begins, but there are works on show with less navel-gazing ambitions. On the ground floor of the prison, Colombian artist Doris Salcedo has reinstalled Plegaria Muda (Silent Prayer) – previously shown at the Guggenheim New York in 2015 ) – a series of overturned tables, each the length of a coffin, through the tops of which blades of grass have begun to grow. Salcedo has described these works as monuments to Colombian men who have been “disappeared” by the government, their bodies never found.

American photographer Nan Goldin uses the exhibition to highlight contemporary instances of persecution. Her 2014 film I Can’t Say recounts the story of a young gay man in Kiev with HIV, who keeps his condition secret for fear of violent retribution. Ukraine is in the thrall of an HIV epidemic –  in 2010, 1.3% of the population was infected, and attacks on the LGBTQ community are frequent. “I can’t talk publicly about my status,” reads the text on screen, beneath a blurred-out photograph of the narrator. The reason? “Firstly, most terrifyingly, they can kill you.”

Goldin, Salcedo and a handful of others aside, there is an unfortunate lacuna at the heart of this popular-spirited event. In a show that takes for its inspiration a man imprisoned for being gay, there is little attempt to shine a light on contemporary instances of legally sanctioned bigotry and violence. There are photographs of starry skies hung on cell walls, mannequins opened up to reveal magical-realist interiors filled with waterfalls and rock gardens, and numerous prison-selfies. But when no mention is made of the 10 countries where homosexuality is still punishable by death, such works begin to look like the folly of the entitled.

As a number of informative displays around the exhibition illustrate, during Wilde’s time, the prison was run according to the “separate system”, in which inmates were subjected to prolonged isolation. They slept in cells alone, performed hard labour alone, and daily exercise was taken in silence while wearing hoods to prevent communication. Such cruelty is hardly consigned to the past. Last month, London’s Metropolitan police announced plans to introduce the use of “spit-hoods”, essentially bags placed over the heads of arrested people, much like those Wilde would have endured, and those used in Guantánamo Bay. “Experience is one thing you can’t get for nothing,” Wilde famously quipped. Inside, for all its good intentions, makes it surprisingly easy to forget that this was an experience that he and many others have paid for with their lives. 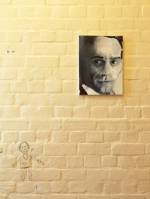 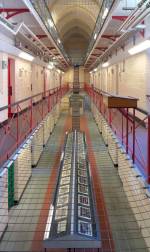 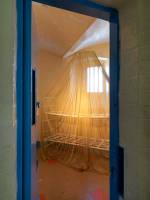