The team of architects, curators and artists engaged to open the newly renovated 12,000-sq metre Casa Daros in Rio de Janeiro, Brazil, in March found little time to rest in the enticing shade of its majestic palm trees.

With its inauguration, Casa Daros became one of the largest spaces in South America dedicated to exhibiting Latin American art. Originally built in 1866, the neoclassical mansion has undergone a major restoration since it was acquired in 2006. During this time educational and cultural programmes have been developed with the aim of making Casa Daros the centre of Latin America’s art community.

Approximately £27m – including the £6m purchase price – has been spent on the building. It had been used as an orphanage during the 19th century and its structure had deteriorated significantly. Its painstaking restoration was guided by national and international conservation principles. All the investment has come from a private collection, Daros Latinamerica, which is based in Switzerland and includes more than 1,000 artworks produced since the 1960s by 117 artists who were born or have lived in Mexico, or Central or South America. The Casa Daros will showcase temporary exhibitions featuring the collection. Daros Latinamerica’s Swiss artistic director and curator, Hans-Michael Herzog, explained that the word “casa”, meaning house in Portuguese and Spanish, was used to convey the idea of a meeting place. “Although we are ruled by museum standards, we would rather call the space Casa [Daros] instead of Museum Daros. We want to imply the sense of something welcoming and cosy.”

In 2000, when international art collector Ruth Schmidheiny asked Herzog to organise Daros Latinamerica, the goal was to generate more visibility for Latin American art globally. Although Herzog has said he considers Casa Daros key to raising awareness of artists such as those represented in the collection, other institutions have also been showing Latin American art. For example, the Essex Collection of Art from Latin America was founded in 1993 in Colchester in the UK. There are also now commitments to Latin American art in important international collections; for example, the Museum of Modern Art in New York and Tate Gallery, which recently announced that the charitable Tate Americas Foundation (formerly the American Patrons of Tate) will intensify relations with Latin American artists.

Nevertheless, a well-funded effort such as Casa Daros is still unprecedented in Latin America. While it can be assumed that Latin American art is now firmly on the world map, it was envisaged that Casa Daros would serve another purpose –to promote the exchange of knowledge of Latin American art among the region’s nations. The truth is that, because of the region’s colonial past, Latin American artists are more directly influenced by art produced in Europe or North America than by what is occurring right around the corner. It is this lack of awareness that Daros wants to address. Even more difficult than the restoration itself, the biggest challenge to date for Casa Daros, according to Herzog, is to lay the foundations for a collective home for the Latin American artists. “We do not plan to be a just another museum,” Herzog contends. “We expect to offer a meeting place from which something else emerges, a place for synergy.”

Casa Daros welcomes its first visitors with two exhibitions. Cantos Cuentos Colombianos – “Colombian Songs and Tales” – curated by Herzog, consists of works by 10 contemporary artists from Colombia. Para (saber) escutar – “To (know how to) listen” – is an overview of the artistic residencies and educational programmes that have been promoted by Casa Daros in Rio de Janeiro since 2007. The curator of this show is the Cuban Eugenio Valdés Figueroa, the art and education director of Casa Daros, who with the general director, the Brazilian Isabella Rosado Nunes, are responsible for the institution’s programme in Rio.

Referencing Brazilian philosopher and educator Paulo Freire (1921-97), who stated, “teaching demands knowing how to listen,” Figueroa observed: “Artists and educators share the challenge of knowing how to listen and knowing how to make the other listen.” He added: “In a time when everyone speaks for the artist, the project of Casa Daros hopes to restore and spread the artist’s voice in dialogue with his/her contexts and artistic production. We want the artist to become the protagonist again.”
To accomplish this goal, video interviews, sound recordings and photos documenting the passage of many artists through Casa Daros during its restoration permeate the show. In the display are works produced during the construction, such as the 2008 Nossa Senhora das Graças, or Holy Mary of Grace, by Brazilian photographer Vik Muniz from the series Pictures of Junk. For this photograph, the artist took an image of the Virgin Mary that was above a doorway at the entrance and created a 2.3m long version of it, using the leftover material from the architectural refurbishment. His insight into what happened before the mansion opened its doors will be on display until July 2013.

The works in Cantos Cuentos Colombianos, made during the past 20 years, have a more overt political cast. These two decades are remembered in the country as a time of violent conflicts involving the drug trade and guerrilla warfare. Works by Colombian artists often reflect internal strife. For example, Miguel Ángel Roja’s photographic series David (2005) shows a young man posing like Michelangelo’s Renaissance sculpture of David (1504), but on closer inspection viewers will be disarmed by the figure’s broken leg. In truth, Roja’s model was a real soldier who had been mutilated by a landmine. When he posed for Roja, the soldier had no knowledge of the Renaissance or Michelangelo.

Most of the Colombian artists shown at Casa Daros – Doris Salcedo, Fernando Arias, Oscar Muñoz, Nadín Ospina, María Fernanda Cardoso and Oswaldo Macià, among them – are recognised internationally, yet their works have rarely been seen in Brazil. A resident of London for 22 years, Macià described Casa Daros as, “an interesting highway, an important place of crossing borders with other countries”. In a reflection on the communicative power of art over geographically separate audiences, the artist added what could be the Casa Daros motto: “I think that art is a universal language and a great piece should work in Haiti, New York, Rio or London. If it can communicate at this high level, if it has this capacity, it is a good work of art.”

Click on the picture below to see the slide show 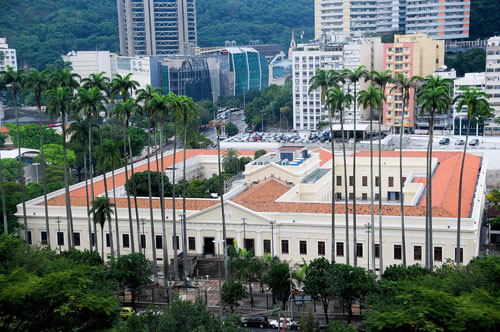 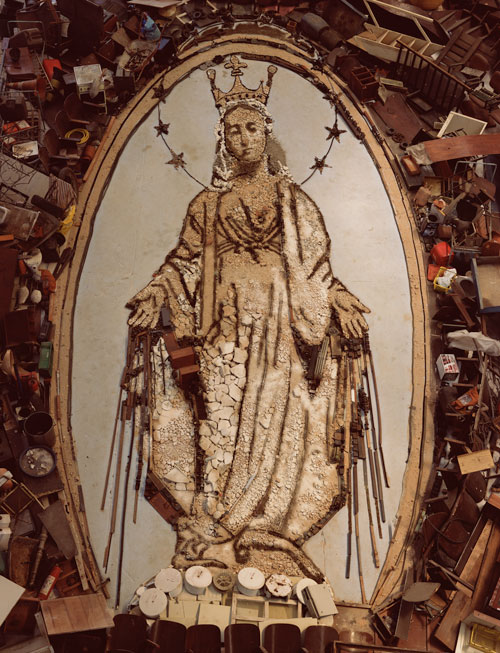 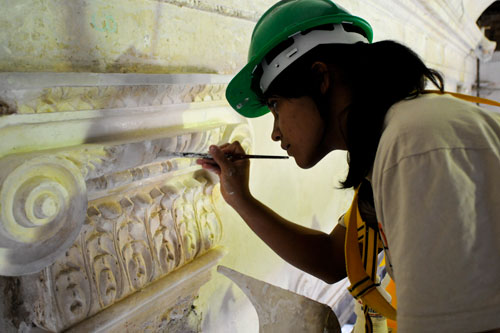 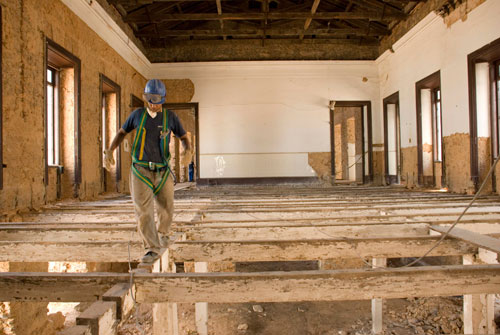 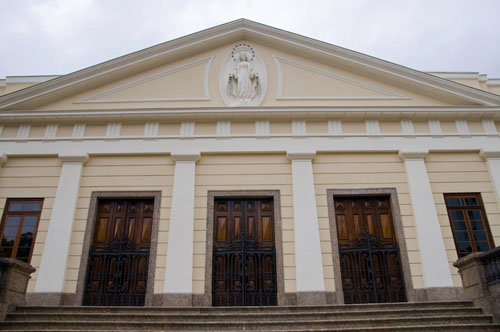 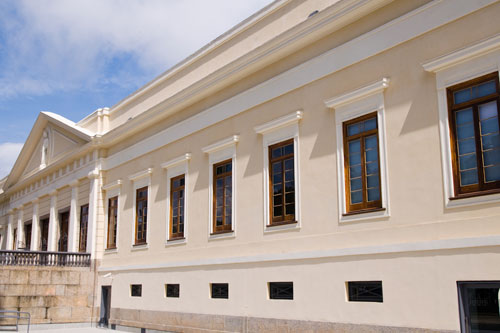 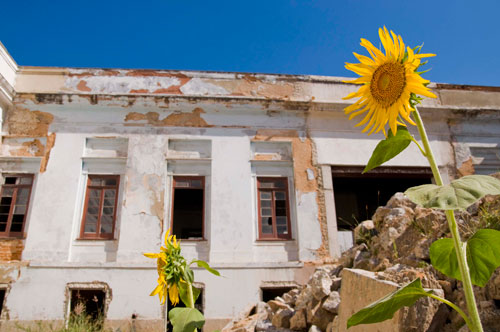 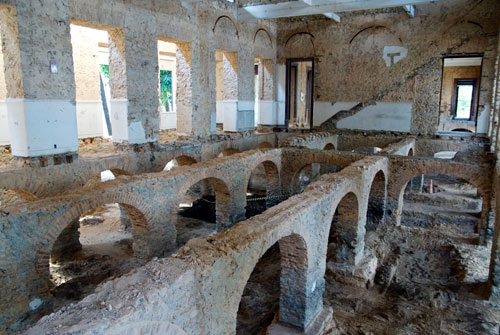 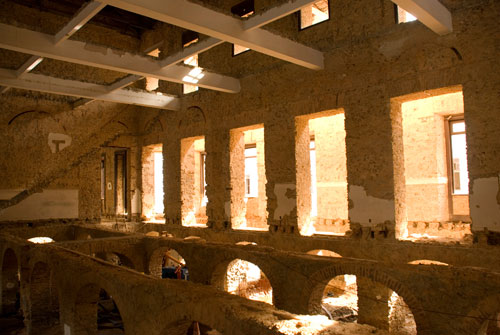 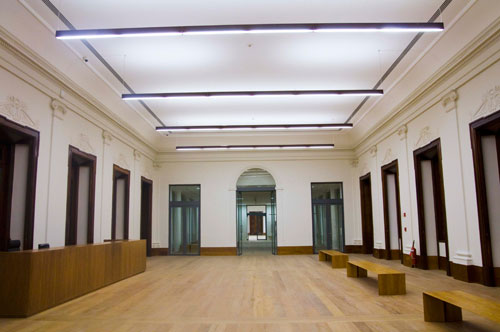