The Fondation Beyeler, the most visited art museum in Switzerland, with in excess of 330,000 people coming through its doors last year, is a comprehensive collection of more than 200 artworks by key modern and contemporary artists, including Pablo Picasso, Henri Matisse, Anselm Kiefer and Christo. It also includes ethnographic pieces from Africa, Oceania and Alaska. What it does not have, however, are many representative items from Latin America. So, to offer a taste of art created miles from Basel where the museum is located, Fondation Beyeler invited fellow institution Daros Latinamerica to display some Latin American artworks in the Swiss museum.

Nevertheless, it is no easy task to summarise a collection of continental dimensions – Daros Latinamerica has more than 1,100 artworks by 115 artists – particularly when it involves dealing with artworks with which its target audience is not familiar. Fondation Beyeler director Sam Keller, Daros Latinamerica artistic director Hans-Michael Herzog, and Fondation Beyeler associate curator Ioana Jimborean joined forces for this challenge. They have chosen to present artists who were born or live in Argentina, Brazil, Colombia, Cuba and Mexico, countries from which the majority of the artists in the Daros Latinamerica collection originate. With the exception of the Cuban Ana Mendieta (b1948), who died in 1985, the selection includes 12 well-established artists who have been working intensively, whose careers span two or three decades, and who have participated in major international shows or won acclaimed prizes or awards. The youngest of the group is the Cuban Wilfredo Prieto, born in 1978. He has already represented his country twice in the Venice Biennale. His installation Apolitical (2001), a set of nation’s flags that, instead of being in vivid colours, are printed in grey, is assembled outside the building where it contrasts with the museum’s colourful gardens.

On the walls of the first room, there are several paintings by the Argentine Guillermo Kuitca (b1961) from the 1990s and the first decade of the 2000s alongside two sculptures by the Colombian Doris Salcedo (b1958). Both artists correlate their subjects with a ghostly presence in their images and objects, in the same manner that they explore the relationship between what is public and private. In the painting Everything (2005) by Kuitca, one can see, against a bright green background, a dense system of filaments that could be a hydrographic map, but as it is intensely red is also reminiscent of capillaries and veins. The interconnections between micro and macro representations – a huge map or the body’s circulatory system – lade the painting with significance, making the viewer think about their own human condition and existence in the world. Kuitca’s creations often have as their main theme the places in which people live. He explores the depiction of the interior of rooms, architectural plans and cartographic drawings. In an early work titled The Song of the Earth (1990), for example, he painted a map on a mattress that is hanging vertically on a wall like a perfect canvas. Literally inverting the position of a bed one sleeps on, Kuitca breaks down the separation that is often found between public and domestic spheres of life. Exposing a mattress as a picture of a topographic zone, he punctures intimacy with a collective large-scale portrait of a place.

Salcedo also uses everyday objects as the basic matter for her art creations. Her choice of material wrought the meanings and issues she wants to highlight. In Untitled (1998), a wooden wardrobe inside what was a bigger wardrobe filled with cement, she strips the furniture of its purpose. In a symbolic sense, the closet, instead of being filled with personal belongs, is depersonalised, occupied with a featureless building material and sealed for ever. Through her work, Salcedo often suggests the experience of loss, and the domestic articles evoke the memory of the human presence that is no longer there. As well as connecting to one’s own subjective experience, her pieces are also ingrained with a social perspective: she has spoken widely about the people who disappeared during the worst years of the Colombian contemporary civil conflict (which began when the Revolutionary Armed Forces of Colombia – the Farc – rose up against the government in 1964, and is still going on, although with less violence due to current peace negotiations).

The issue of the victims of the Colombian conflict is more explicitly viewed in the video Caquetá (2007) by Miguel Ángel Rojas (b1946), in which a young Colombian soldier, who is missing both hands, washes military camouflage paint off his face using his injured arms. Another Colombian, Oscar Muñoz (b1951), in his video Re/trato (2003) [Portrait/Re-treat], returns to the theme of people who vanished in the conflict, trying to draw a self-portrait with a brush using only water rather than ink on a hot pavement. Before the final stroke, the first lines of the drawing have already evaporated, faded away.

These videos are part of the extensive video programme from the second half of the show, in which one can also see video art by the Argentines Jorge Macchi (b1963) and Miguel Angel Ríos (b1943), and the 1970s film documentations of Ana Mendieta’s performances in nature. She is well known as a pioneer of extreme body performance actions. The variety of videos also enables the visitor to see direct references to Latin America, such as the 15-minute film Habana Solo (2000) by the Cuban Juan Carlos Alom (b1964), an audio-visual portrait of his country’s capital; or Spiral City (2002) in which the artist Melanie Smith – born in Britain in 1965, but living in Mexico City since 1989 – depicts the dense urbanity of the place she made home as an almost abstract mass. Mexico City is also the theme of Santiago Sierra’s Road Obstruction by a Cargo Container (1998). He is another European – born in Madrid in 1966 – who picked Mexico as a place to live and is hugely influenced by its environment.

Following these more direct allusions to Latin America, standing alone in the next gallery room is the poetical piece Mission/Missions (How to Build Cathedrals) (1987), by the Brazilian Cildo Meireles (b1948). It is an installation in which one can see a floor covered by old coins from Brazil and, at the top, a plafond of bones. A pillar of communion wafers connects the carpet of coins with the ceiling of bones. This piece was made as a frank indication of the indigenous acculturation in the colonial period when the Jesuit missions arrived in the country. However, the rich symbolic combination of objects in Meireles’s artwork allows one to connect it effortlessly with other current subjects in contemporary society. In fact, all the artworks in the exhibition imply strength and the emergence of social fragility through the use of materials rather than literal statements. One can understand that the intention behind the curatorial choices was to lead the public’s perception to universal interpretations rather than guide them by injecting contextual information. This is a clever strategy to reach a public unfamiliar with such artists. The Fondation Beyeler recently acquired an artwork from the region, an installation by the American-born Cuban Félix González-Torres (1957-96). Composed of string of lights, the Untitled piece from 1992 ushers the visitors to the entrance of the Daros Latinamerica showcase, welcoming them to experience a sample of Latin American Art. 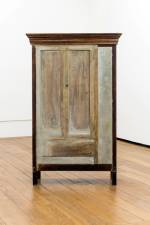 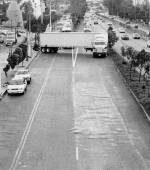