Combining elements of Christian iconography and ritual with artefacts from North African and oriental culture, Buthe created entrancing and immersive installations, at once meditative and full of energy 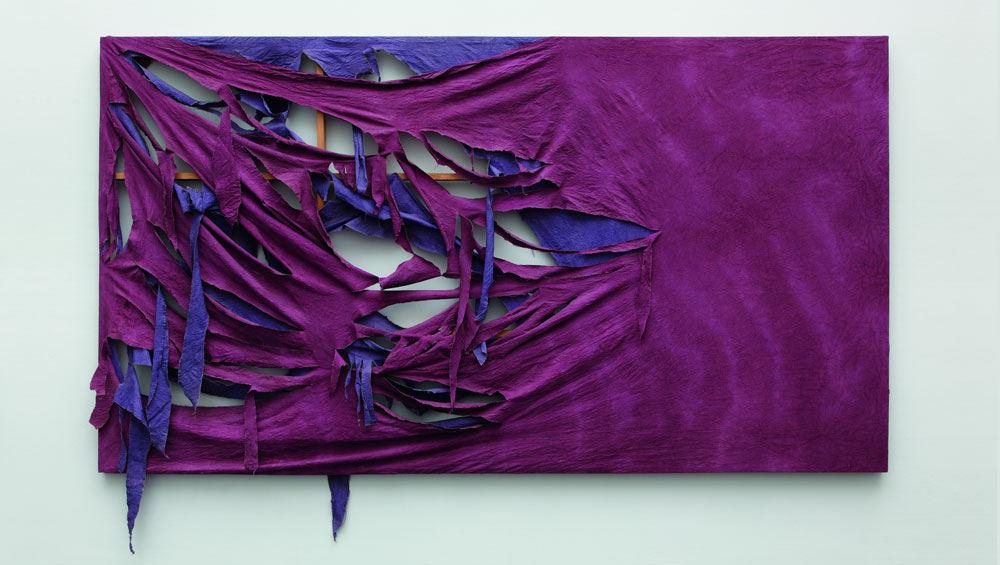 The name Michael Buthe (1944-94) is not that well known outside Germany – or even within – for the expressive artist, who developed his own style from the early influences of European art informel and American minimalism, collecting and collating ideas and artefacts from Christian, Arabic and oriental cultures, creating canvases, sculptures, installations and diaries, died at the age of 50 from a liver disease that had begun with jaundice in his youth. Similarly gay and Roman Catholic, Buthe has been compared to the American painter Paul Thek (1933-88). This five-gallery retrospective at the Haus der Kunst, Munich, presents a chronological overview of his oeuvre, centring on two large-scale installations, recreated from the little documentation that exists. It is enchanting and immersive, meditative and energetic – and certainly succeeds in earning Buthe his place in the canon.

Born in Sonthofen, Germany, Buthe completed his studies at the Werkkunstschule Kassel and the Kunstakademie Düsseldorf, and his early works show his tussle with the conceptual framework of minimalism. Harking back more to the likes of Lucio Fontana (1899-1968), Buthe’s cloth works from the 1960s and early 70s were a tactile response to the period, in which he performed radical assaults on the canvas, leaving it torn and shredded, hanging like a shroud from its frame. Sometimes multilayered, these wrecks suggest victims of war or rape; those with thickly sewn scars, an attempt to patch back up and redress the damage – Buthe’s means, perhaps, of questioning the value of spirituality in an increasingly secular society.

The first major work on show is Baptistery with Mom and Dad (1984), a whole-room installation created for the exhibition Inch Allah in Ghent’s Stedelijk Museum voor Actuele Kunst. In it, Buthe, by then splitting his time between his home in the Rhineland and Morocco, which he first visited in 1970, vividly combines the mythology of North African cultures with elements from his Christian upbringing. Abstract and thickly painted screens, splattered with wax and daubed with handprints, are decorated with everyday objects – such as a basket of eggs (symbolic of rebirth), wooden chairs, a griddle and straw hats – and create a chapel around a central cube, filled with a pool of golden colour, similar to holy water in a font, and covered in melted – and melting – wax, dripping on to the surrounding ground. Above this, a disc-shaped, hanging panel, is painted like the night sky, while, at the entrance to the installation, two anthropomorphic log and twig sculptures stand proud, parodying popular biblical imagery of parents: one with shoes; one with feather dusters and a pram. The whole work has a sense of energy, acquired from the vigorous paint marks and bright colours, the haphazard combinations and the oriental feel. A Christian founding permeates regardless and that the piece should represent a baptistery is easy to deduce, despite the anomalies at hand.

As Buthe began spending more and more time in Morocco, his works became increasingly infused by the oriental. Boulli Afrikaa (1968 onwards), for example, is an assemblage, that began life as a simple pair of shoes, and developed into a hanging piece, wrapped up in red thread, with plaited materials and feathers, beads and a comb. Untitled (1979), on the other hand, comprises a Persian horse blanket overlaid with a small wax picture.

Certain leitmotifs begin to repeat in his works, including this use of thread and the wrapping up of objects. The night sky with its stars and the golden daytime sun both recur as well. In the stairwell, as one enters the exhibition, two works face one another reflecting this symbolism: Le Soleil (1974), a wax and gold bronze on glaze-painted canvas, looks more like a white marble disc; while Mario (1978), paper on canvas, depicts a golden figure and his shadow, standing, arms raised before the sun. “For me,” said Buthe matter-of-factly, however, “my sun is, like all images, a functional object for seeing, for feeling, for dreaming, for understanding.”

Again evoking the meditative depth of a starry night sky, Fatima’s Last Secret (1985) comprises a pair of 15-foot-long abstract triptych paintings – one in a deep red with golden stars and a golden central panel; one in blue with silver stars and a silver central panel – painted with swirling strokes, which make the paint look like the rich velvet used in religious rituals, yet simultaneously suggesting blank icons. The title, similarly mystical, references a reported appearance, in Portugal in 1917, of the Virgin Mary to three children, to whom she entrusted three secrets. Two were made public in the 1940s, and the third, after heated speculation, in 2000.

The second major work in the exhibition, filling the final room, is Holy Night of Virginity (1992), Buthe’s last spatial installation, created for Documenta IX, which had the theme of art referencing the body. It has been described as his “Gesamtkunstwerk”, bringing together motifs from throughout his career. The piece comprises 14 copper plates and a spirally entwined iron chandelier, embellished with votive lights and two large, golden egg-shaped objects. On each plate is the silhouette of a life-sized figure – created by drawing around one of his friends – arms raised in virtuosic variation. The plates have been coated in black etching base, consisting of a mixture of wax, resin and asphalt, and then scratched through using various methods, including a power cable. Solvents have also been applied to create smudges, exposing the copper – like the vibrant swirls of his earlier paintings. The silhouettes are decorated with motifs including fish, hearts, flowers, stars, dots and handprints. As a whole, the work might reference various inspirations: the Greek Orthodox basilica in St Catherine’s Monastery in Sinai, which has ostrich eggs above its ceiling lighting; Piero della Francesca’s Pala Montefeltro (1466-74), in which an ostrich-sized pearly hangs above the head of the Madonna; and the formal, sculptural language of Brancusi.

It is the artist’s diaries that, perhaps, most sum up Buthe’s extraordinary oeuvre, however; they are filled with collaged photos; images from magazines, of gods and sculptures; cigarette wrappers; stamps; foil papers; pasta shapes; coins; a mini Babybel cheese wrapper. Some pages, like his early cloth works, are stitched together; some entire books are tightly bound with cloth and tape, like miniature mummies, hiding secrets, just like his collaged works, in which successive layers become hidden one after the other. Bookmarks are made of coloured thread, plastic objects and silver spoons and tales are illustrated, integrating legends, myths and Biblical stories into exotic fairy tales of Buthe’s own. Shimmering and glimmering, glittering and attracting the visitor’s eye, these fantastic creations epitomise the oeuvre of an artist, who lived between cultures and collected like a magpie. 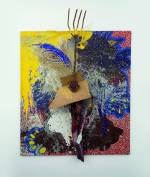 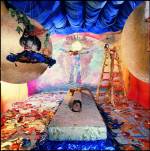 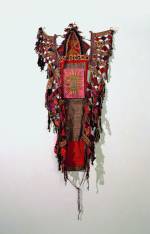 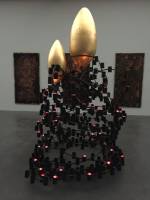 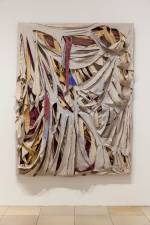 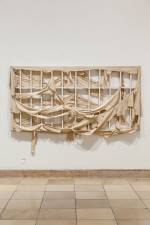 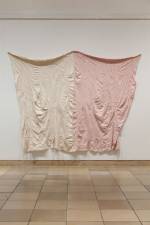 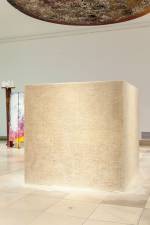 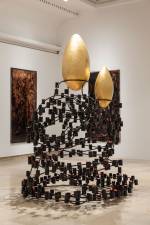