Since the present recession began in the west, several political narratives have successfully been pushed to the fore to absolve those guilty of financial malpractice and facilitate the calculated swingeing cuts that have supposedly balanced the books. The most emotive of these myths is also the oldest – the demonisation of “the other”. If immigrants didn’t exist to scapegoat, it would be necessary to invent them.

The most disturbing thing about Mathieu Pernot’s powerful, compassionate and subversive The Crossing is how necessary it is. Pernot examines the how and who of immigration and crucially recontextualises it. It is a damning indictment of how far things have slipped when an exploration of this kind wields such force and interrupts the silence so resoundingly. Why we have suspicion of the nomad, a suspicion that leaves us vulnerable to manipulation, is a question for psychologists, sociologists and anthropologists. Pernot tacitly accepts that we do, and then goes much deeper to show that when we really think and engage, we actually do not – and need not. His photographs obliquely challenge the fear and ignorance that fuels distrust and the recurring myth that to belong requires others to be shunned. “There but for the grace of God, go I” might be a tempting indulgent thought, but there is little evidence of the deity at work here. There is only the attempt to find home and withstand the exclusion from it.

In divine absence, it is left to mankind to attempt to construct paradise and fail, intentionally or otherwise, in the process. Pernot’s The Best of All Worlds series (2006) contains satirical echoes of Voltaire’s Candide. Spurred on by advancements in architectural design and city planning by the likes of Le Corbusier and the Congrès Internationaux d’Architecture Moderne, vast housing developments were built in the middle of the last century, encircling Paris. These were to be not just new homes, but new ways of living. In an unintended sense that was the case. The postcards of this brave new world of high-rise buildings quickly became a dystopian template; at the very least for those who sought to denigrate and dehumanise their inhabitants. Along with his corresponding Witnesses sequence (2006), Pernot touches on the people who lived in these flats, showing glimpses of their individuality (in notes containing humour, peculiarity and poignancy) and resilience, as well as the impersonalising forces they faced. In the end, there is circularity to the intentions of those who would seek to build a utopia and those who would deride it as a dystopia; neither actually consulted the human beings involved.

The result finds expression in Pernot’s twin series on ruins: Implosions (2000-2008) and Windows (2007). In the former, he captures the frozen moments when residential blocks have been detonated and are in the process of disintegrating and collapsing. There is an awe involved in seeing a colossal building fall to the earth and tons of masonry convert, through barely imaginable force, into dust. More malevolent than the physical demolition is the psychological erasure. It is not simply a question of this place, those rooms and those lives no longer existing here. It is as if they had never existed to begin with. With Windows, we can detect the cliché, an enduring and seductive one, of the beauty of destruction. In framing serene vistas from devastated viewpoints, Pernot is doing something more interesting than simple ruin porn. He is inviting thoughts on who lived here, in the corroding wallpaper and plaster and who sat and gazed out at these views in different years and different light. The urban renewal opportunities afforded by demolition mean that little care is given to those displaced and the futures as well as pasts that have been lost. In effect, the inhabitants are supposed to evaporate along with the dust. Pernot reminds us that they cannot and will not.

Where some of the displaced people go is explored elsewhere in this career-spanning exhibition, curated by the artist himself and Marta Gili for Jeu de Paume. In The Migrants (2009), Pernot captures homeless Afghan immigrants at dawn in Paris. The fabrics under which they sleep and take shelter resemble nothing less than body bags on the pavement. In some cases, that may be true. Their identities and wellbeing go unknown and undesired. Their shrouds are at once tombs, sanctuary and protest. The Afghan Notebooks (2012) lets two of these figures, Jawad and Mansour, speak as they wish, of the odysseys they undertook to get to France. In a kinder time and place, such journeys might have become the stuff of legend but in the age of commerce and the lingering aftermath of empire, such considerations would shatter the illusion of superiority, the illusion of our home versus the supposed wastes beyond. By insisting we are the Promised Land, we destroy any hope of becoming it.

With Panoptic (2001), it becomes clear that the question of immigration is not one of motion, but restriction. The high-rise dystopia changes into the Benthamite dystopia of prison exercise yards. There are no corners in which to hide or to exhibit any signs of sovereignty, whether that is freedom, independence or revolt. The very architecture is designed to view and restrict everything, bar that which is deemed permissible. Though the prisoners cannot escape over the walls and barbed wire, the idea of the Panopticon and the All-Seeing Eye seeps into the city beyond.

Invariably, such totalitarian systems recall the darker periods of our recent and current history. Pernot goes straight to the source. In A Bohemian Camp (1998-99) and The Last Journey (2007), he broaches the still-sensitive, still-overlooked internment of “undesirable” Gypsies in camps in Vichy, France. From historical records and personal interaction, he unearths the images and stories of those held at Saliers camp near Arles. He charts the movements of those who were detained and the memories of those who survived. These people were told they did not belong, yet they could not leave. It is a paradox until you realise that their very existence was deemed the problem and, with problems of such kind and at such times, there are those who would offer a solution.

If this seems morbidly pessimistic in relation to life now, Pernot does show that there is the capacity for resistance, to find footings on the slippery slope. With the French authorities demanding identity photographs from Gypsy families, Pernot accompanied the children to the railway station at Arles. The resultant series, Photo Booths (1995-97), ingeniously shows how a photo can be taken and subverted at the same time. Poses and expressions are adopted that render the pictures redundant for the waiting bureaucrats. In the process, they capture a spirit that evades the passive lens. In one shot of a little girl clasping her face, the masked identity gives rise to uncertainty. Is she weeping or laughing behind her hands? Similarly with The Shouters (2001-2004), the viewer searches instinctively for signals in faces clenched in emotion, to signify threat or pity. It becomes clear that the figures are standing outside the prison walls and are roaring to communicate with their loved ones inside. In doing so, they are defying the Panopticon, but it is far from a victory. We do not hear what they are shouting. They are trapped in a soundless tableau. Photography may be a silent medium but it is not, however, completely silent.

Throughout The Crossing, Pernot builds an interconnecting structure between each project and each person, flitting back and forth. Sequences reoccur and interact. Pernot’s focus on Giovanni (1984-2013) shows from different angles and in different layers a person growing up, resisting by surviving in the midst and in spite of all of this. The struggle for home is never reconciled, but it is never truly surrendered. What appear to be endings can conceivably be beginnings. The exhibition culminates with Pernot’s Fire series (2013) in which, watched by onlookers, flames consume the skeleton of a caravan. At first, it is unclear if the act was one of rage or victimhood, or even if there are human forms to be discerned in the conflagration. From another angle, set to the sky at dusk, it has less of an apocalyptic atmosphere than that of a ritualistic celebration. In fact, it is somewhere in between. In Romani tradition, when a member of the community dies their caravan is set on fire as a funeral pyre. Fittingly, characters from the earlier works are gathered in this last series. It seems a finale, yet perhaps only in the way forests are burned to clear the way for new growth. The Crossing does not insult those it features with some patronising revelation that ‘”they are human too”: rather, it pertinently reminds us that we are, or we should attempt to be at the very least, for our own sake if not theirs. 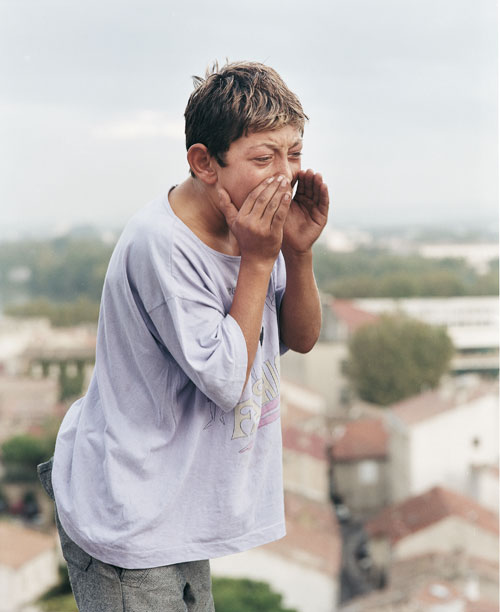 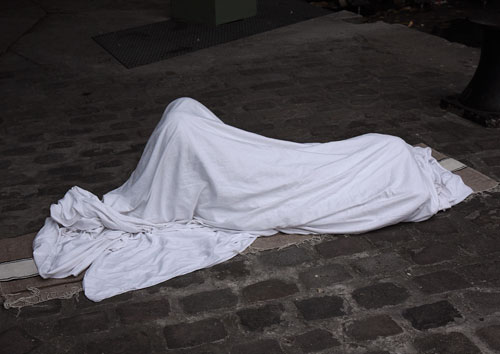 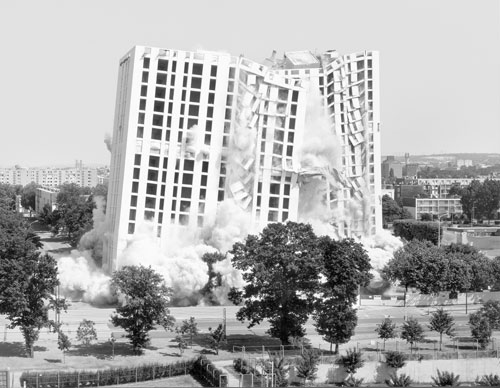 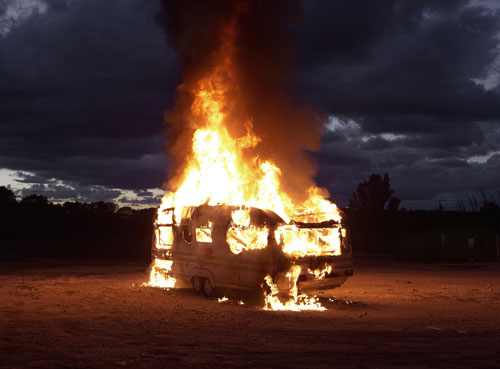 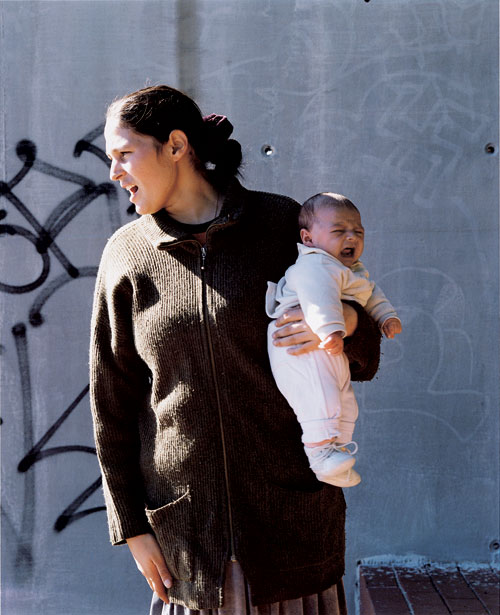 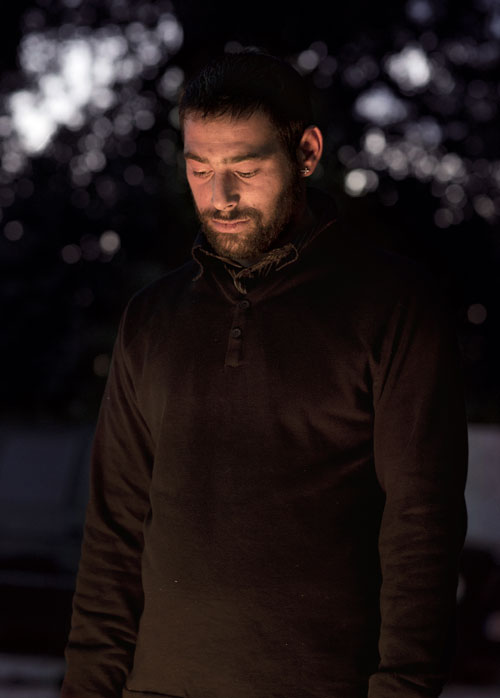 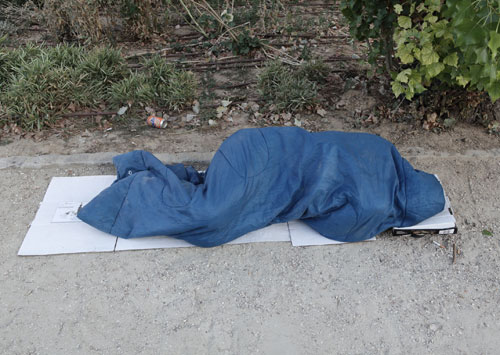 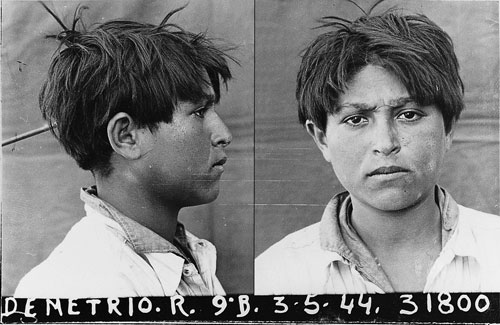 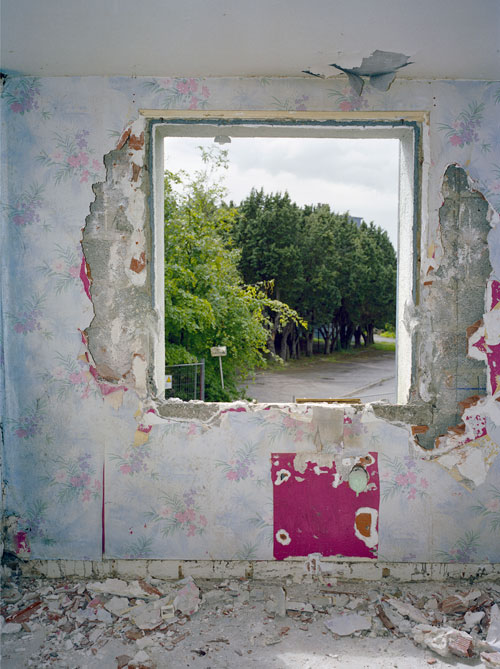