Of the many publications on Le Corbusier, virtually none have focused on the architect’s approach to landscape. This is not unremarkable because, for him, buildings and landscape were indivisible. Jean-Louis Cohen here presents an appropriate solution to the issue by choosing a global “atlas” as his template.

The indissoluble connection between design practice and place was always present in Le Corbusier’s works, but is seldom heeded by commentators, who are mesmerised as always by the built architecture itself. That approach across the “atlas” is presented here by several authors and contributors (comprising a substantial list of critics and historians). Ranging over some eight relevant geographical regions, these territories and travel destinations now cast a fresh light on Corbusier’s numerous working itineraries both in Europe and across the globe.

The current exhibition at the Museum of Modern Art, New York, curated by Cohen and Barry Bergdoll, made this extensive new publication possible. Bergdoll has supplied a revealing introductory article enlarging on the concept for an “atlas” that is developed here, and pinpointing the early “Voyage de l’Orient” that the trainee architect made in September 1911; as an Act I of what may be described as “the Acropolis affair”, with the superb manifestation of his design for the capital city of Chandigarh being the built-climax of this evolution of ideas. Yet it does seem that the transformative impact the Acropolis had on Corbusier (at that time, still known as Charles-Édouard Jeanneret) was nothing short of traumatic: just as, much later, was his sublime realisation that Chandigarh, with its rigorously agrarian landscape, would house a new capital city for the Punjab. This symbolic architecture of power is rightly represented here, too, as the climax of a life-long preoccupation with landscape form, inspired as much by the ground view as by the visionary aerial site appraisals Le Corbusier made from aircraft.

In a kind of systemic, sectional resume of the long-term effects on Le Corbusier of the Acropolis itself, it seems that a predominant intellectual filament runs from there, discreet but ever-present throughout the “oeuvre complete”. Such an exercise helps to bear out the essential narrative that runs throughout his work. It also authenticates the compositional standpoint of this new volume (and exhibition), as a convincing representation for the whole concept as it later developed. This “Parthenon effect” was pointed up by Le Corbusier with a major inclusion in his seminal Towards a New Architecture,1 using the 19th-century French engineer Auguste Choisy’s image in its original form of plan and perspective of the Parthenon, Erechtheum and the statue of Athena in front of the Propylaea. He wrote at that time: “The different masses of the buildings, being asymmetrically arranged, create an intense rhythm. The whole composition is massive, elastic, living, terribly sharp and keen and dominating.”

It is relevant to add here that, in May 1934, this journal’s predecessor, The Studio, had successfully commissioned and published Le Corbusier’s book, Aircraft.2 This, an editorial coup, was a cri de coeur by the architect, who was keenly enthusiastic on the subject of flight and the imagery of contemporary aircraft, something that is especially relevant to the subject of this new book. Aircraft is the rare source for several of the photographs and drawings, including those of German gliders caught on the ground (swastikas on the tail innocently revealed by Le Corbusier along the way). The value of the “bird’s eye view” of the landscapes of man, this “map” of the Earth, is revealed from the aeroplane, as exemplified in Le Corbusier’s 1932 Plan Obus, Algiers and his “aerial” view of the Algerian landscape.

Architect-philosopher Dr Lorens Holm recently published an important treatise, Brunelleschi, Lacan, Le Corbusier: Architecture, Space and the Construction of Subjectivity,3 in which he describes the effect of the actual physical and visual confrontation between Le Corbusier and the Parthenon, on the Acropolis (which evidently he visited daily from 12 to 27 September 1911). This “meeting” apparently came to obsess Le Corbusier. Extraordinarily, he filled 35 of his regular notebooks with sketches of the Propylaea, the Parthenon, the Temple of Athena Nike (Νικη Απτερος, correctly translated as “wingless victory”), and also general views (the Erechtheion being strangely missing): the important presence of “place” in landscape was similarly swiftly plotted, evidently in drawn form, and later described in his subsequent Buenos Aires lecture of 1923. In this, he caustically characterised that compelling Athenian landscape profile as “like a rocky hull, a giant tragic carcass”.4 Concerning the Acropolis itself, Le Corbusier then talked of “the dark knot that binds the sky to the darkened earth [at sunset] is that black pilot of marble”.

In fact, Holm quotes, as regards the Acropolis, an aura of death perceived by Le Corbusier in Athens, about which he was to ponder all his life. At the time, in 1911, his friend August Klipstein managed to get a revealing photograph of him, standing bemused before the fragmented Parthenon. Soon, too, there was the Maison Dom-Ino (l924), a kind of contemporary Parthenon metaphor. As for that Acropolis landscape so dominated by the Parthenon, it was the orthogonal irregularity of the building’s disposition with others on site, set just off the right-angle, which had particularly affected Le Corbusier: the deliberate site distortion and its perceptual effect, hence his subsequent recognition in topology of the “free plan” so important for the future. In An Atlas of Modern Landscapes, the professor of architecture Yannis Tsiomis quotes Le Corbusier on the Acropolis: “Every hour it grows more deadly up there. The first shock was the strongest. Admiration, adoration and then annihilation. But it disappears and escapes me, I slip in front of the columns and the cruel entablature. I don’t like going there any more. When I see it from afar, it is like a corpse. The feeling of compassion is over. It is a prophetic art from which one cannot escape, as insentient as an immense and unalterable truth.” In his notebook of 1911, he wrote: “The Parthenon is dead.”

In due course, Le Corbusier was to become a global figure. But one wonders whether, at the end of his life, when he died suddenly, swimming in the sea below the “Cabanon” – the diminutive hut that he built for himself at Roquebrun – the spectre still haunted him: or whether he was seized by a last twinge of jealousy at Eileen Gray’s predominance, so well merited at Roquebrune, where in 1924–29 she designed the Mediterranean coastal house (named E1027) for the Paris-based architectural critic Jean Badovici.5 All that was contemporaneous with the self-caricaturing sketch uniquely reproduced in Studio International,6 one of the best self-portrayals, when he presented himself as a radical, showing himself as a contemporary Don Quixote (he was known to admire Cervantes) “tilting at old windmills”. The ungainly bourgeois proponent has stuffed both a Doric and a Corinthian column under his arms. Seen in the background, Le Corbusier had typically sketched in a distant city skyline.

By good fortune, even if the Acropolis on his first acquaintance conveyed a foreboding of death in life for Le Corbusier, the much later realisable scheme for Chandigarh was to epitomise all in life (and at its late stage) that such a fortunate new project might now be deemed to offer. This special landscape-based project was, in late l950, passed to Le Corbusier and Pierre Jeanneret, almost by accident. An Atlas of Modern Landscapes describes how Le Corbusier was enamoured with the site from the start, set as it was on a great fertile “paysage” with the Himalayas as a distant backdrop. (The phantom of the Acropolis was to be laid to rest at last.) This superb late project by Le Corbusier is well described in the book. And a strong native influence on the architect is shown to have been revealed near Chandigarh, namely at the princely domain of the Maharaja of Patiala and his Mughal Garden of Pintore, once again drawn by the architect from an aerial perspective.

Importantly, throughout the book, the real and fundamental importance of painting, drawing and sculpture with architecture, as practiced by Le Corbusier is well elaborated and exemplified. This new publication clearly identifies the essential integration of landscape values and “landform” with architecture as practised by the master. It is embodied as an inherent part of the design process. It shows how Le Corbusier followed such a path throughout his career, drawing incessantly. All told, this searching and profound compendium (and exhibition) offers an essential, well-researched experience and publication to add to the corpus of books by or about this legendary architect. It fulfils a necessary and revisionary role to stand in line with our own contemporary thought on the architecture and landscape of the past 20 years, providing, with this new enlightenment for architects, planners, historians, contemporary students and all practitioners, an essential update. It also perhaps helps to revive the unanswered riddles incumbent in a great architect’s quest: more for fulfilment than redemption.

2. Aircraft by Le Corbusier, published by The Studio, London, with Studio Publications Inc, New York, 1935. This work was commissioned by Studio Ltd, London in respect of Le Corbusier’s special enthusiasm for aircraft, and is now a rare collectors’ item.

3. Brunelleschi, Lacan, Le Corbusier: Architecture, Space and the Construction of Subjectivity: The Architecture of Self by Lorens Holm, published by Routledge, London and New York, 2010. This work is a radical reappraisal of the architectural psychology of Le Corbusier.

6. The cover of Studio International, November 1987 (Vol 200, No 1,018). The drawing (executry of Mrs Natalia Stucley) was made during a stay in the family’s home in Spain (1928) and had never previously been published. 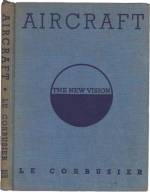 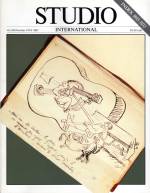 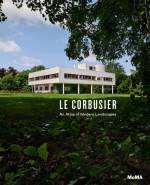