Martin Parr – Interview: ‘Britain is eternally fascinating … full of contradictions … Photographing it is a form of therapy’

Martin Parr – Interview: ‘Britain is eternally fascinating … full of contradictions … Photographing it is a form of therapy’

Documentary photographer Martin Parr’s latest exhibition, Only Human, at the National Portrait Gallery, is all about us – us humans, but especially us British. Here, he talks about cake, collecting and Britain in the time of Brexit 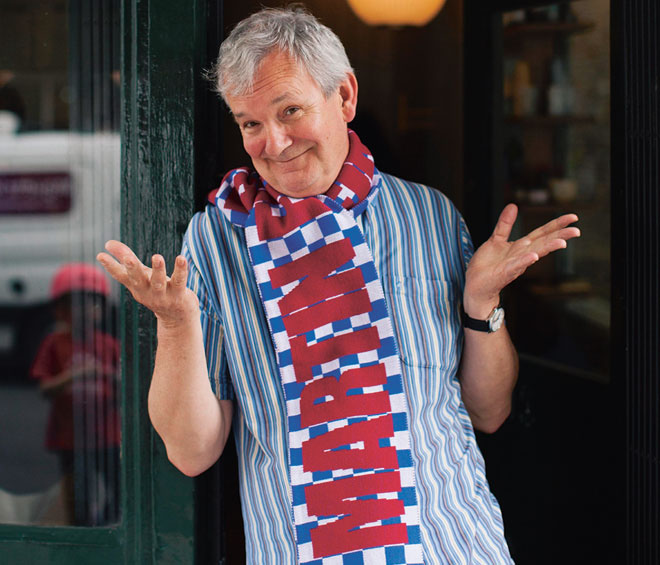 Grayson Perry says that when he first discovered the work of Martin Parr (b1952, Epsom), he found: “Someone who was pointing out with laser precision the aspects of society I didn’t even know I was driven by.” He adds that Parr “makes concrete the wisps of feeling we have been sensing for years … [his subjects] hovering uncomfortably between comedy and tragedy”. 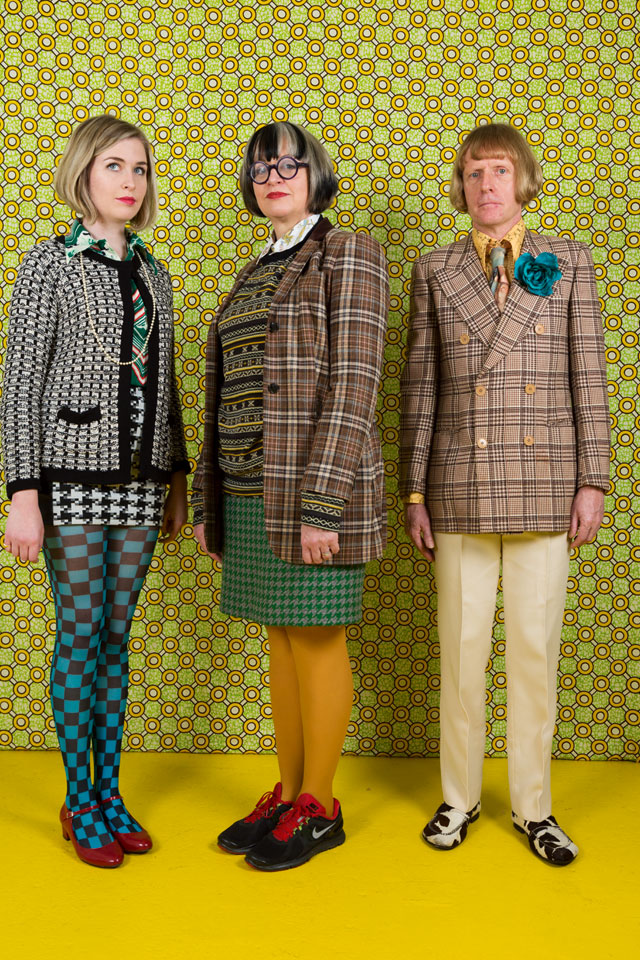 Parr has been a photographer for four-and-a-half decades. He photographs food and ephemera, but mostly people – and particularly in his native Britain, where he finds his subjects across the country from racecourses to fish and chip shops, high streets to beaches, a Goth party to a Sikh wedding. His name was really made by The Last Resort, a three-year project ending in the mid-80s with an exhibition at the Serpentine Gallery, and a book, depicting the working class at play in the rundown Merseyside seaside town of New Brighton. He was accused of voyeurism, but ultimately the controversy did him no harm. He soon turned his camera on to the middle classes (The Cost of Living, 1989) and more recently – once he was famous enough to gain privileged access – on to The Establishment (Oxbridge, public schools, the Old Bailey etc). 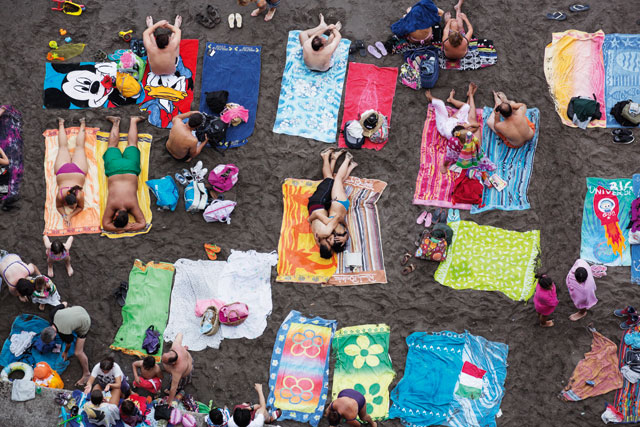 He has works in many major collections, including the Tate, the Museum of Modern Art in New York, and the Paris Pompidou Centre, and led the legendary Magnum Photographic Co-operative from 2013 to 2017. He has featured in more than 100 exhibitions across the world and published more than a hundred books of his own work, as well as editing 30 works by others. In 2017, he opened the Martin Parr foundation in Bristol, supporting and exhibiting the work of photographers who, like him, focus their lenses on Britain. I meet Parr on the first day of Only Human, his new National Portrait Gallery exhibition, which, besides a few food photos and a wall of auto-self-portraits, is almost entirely work new since his Barbican retrospective of 2002 and has a particular emphasis on the period since the Brexit referendum.

We sit beneath his picture of egg and chips (“I photographed food before everyone else did – before the smartphone”) in the exhibition’s own cafe. Parr says he liked the idea of a break and a cuppa between galleries, an appropriately British idea, and: “It saves you going out to the cafe – which is posh here.” Not that the prices in the Only Human cafe are any less inflated. The Parr cafe sits in a red-floored room right in the middle of the show – a first for the NPG – and offers a selection of stereotypically 1970s British teatime treats … And an opportunity for our interview to be constantly interrupted by curious and adoring visitors to the exhibition.

Juliet Rix: Did you choose the cakes?

Martin Parr: I was given the cake menu for approval, yes. Battenberg was essential because it’s the right colours. It’s a Battenberg kind of show.

JR: Talking of colour, you started out working in black and white, but in the mid-80s, just before The Last Resort, you switched to colour – very vibrant colour. What made you switch?

MP: I’d seen the American exhibitions of people like Stephen Shore and William Eggleston being taken seriously in public museums, and British photographer Peter Mitchell’s show and John Hinde’s postcards – lots of things around me that were colour and impressive. And that made me pay attention to the possibilities of colour. I’m a jackdaw. I’m attracted to bright colours. I use flash even in daylight. It keeps the colours more intense, which I like. 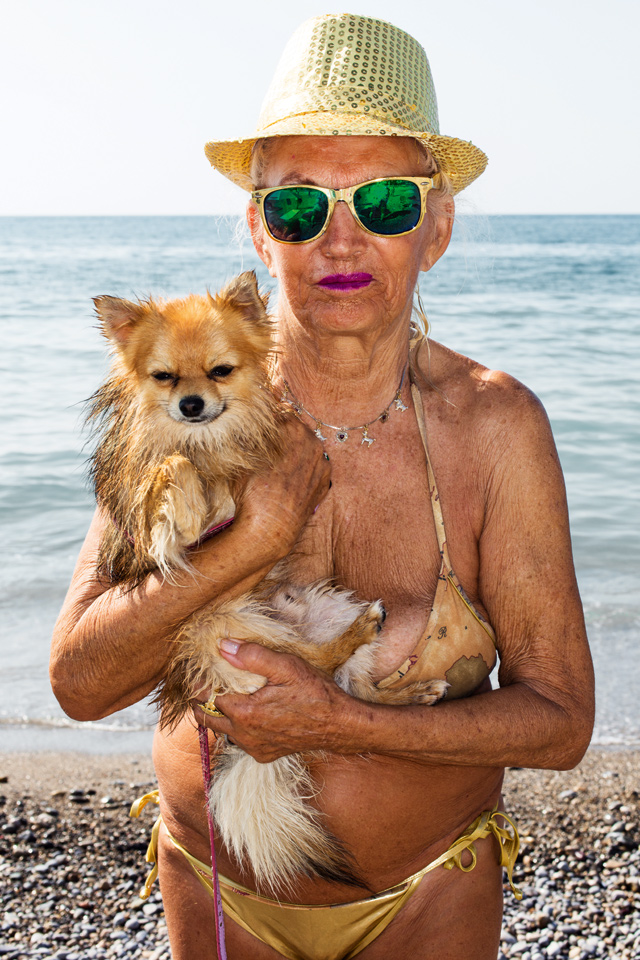 JR: Do you think it changes the way people look at the work if it is in colour?

MP: If you look at the Don McCullin show at the Tate (until 6 May 2019), which is all black and white, it’s a bit relentless in one sense. Colour, you could argue, is a bit jollier. Black and white tends to analyse. It simplifies things – which may or may not be an advantage.

Exhibition visitor: “Can I just say, love the show – a joy!”

JR: Most of the work here is new since the Barbican show, but the themes aren’t all new, are they?

MP: No. I have one main theme which is the leisure pursuits of the western world and, in particular, Britain, so that’s a theme that will never disappear. Within that theme there are lots of subsections – some of which have been isolated out here.

Exhibition visitor 2: “May I take a selfie?”

JR: A lot of this show, a lot of your work, is about British identity – and class. What is your own background?

MP: Solidly middle-class British – suburban Surrey. My father was an obsessional birdwatcher, so I spent every Saturday at Hersham sewage works where he would ring birds and I would train spot to relieve the boredom. I collected train numbers. I have been a collector since childhood. I had a natural history museum in the cellar when I was maybe eight to 12. I collected bird pellets (regurgitated by birds of prey) and my father could identify the bird from the contents of the pellet. I still collect – photographic books, ephemera. My main collection of photo-books went to the Tate, so I had to rebuy them all! I really only collect British and Irish photographers now.  Photography is an act of collecting, too. My grandfather was an amateur photographer and he took me out shooting. By the age of 13 or 14, I wanted to be a photographer. 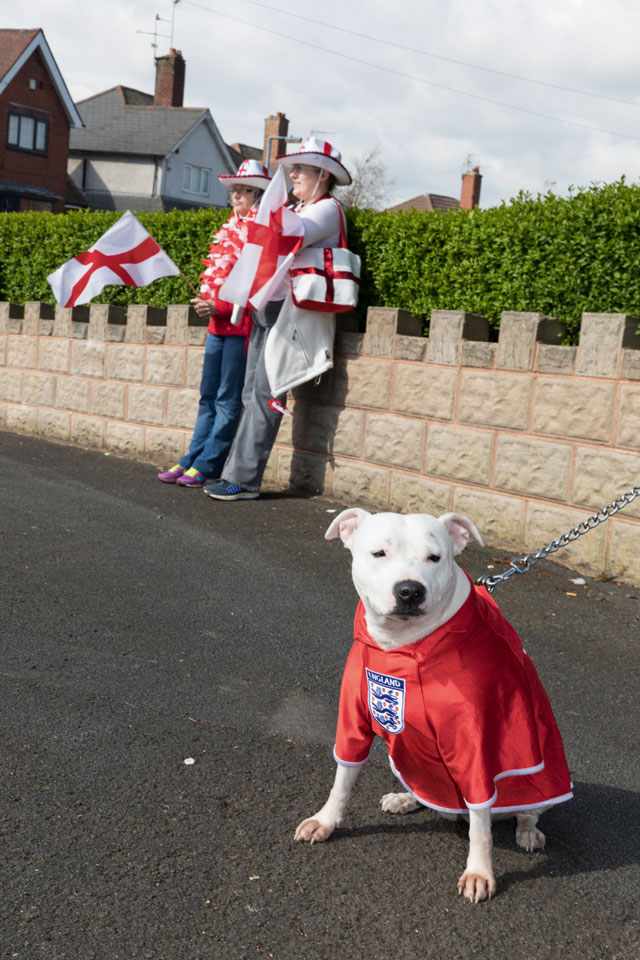 JR: What attracts you to the subject of Britain in particular?

MP: It’s eternally fascinating. I live here. I’m British. It’s the place I know best and the place I can explore easiest – and we’re a very quirky bunch of people, full of contradictions. I have a love-hate relationship with this country and it’s almost like photographing it is a form of therapy – me defining what’s going on, my position, expressing the contradictions and ambiguity I see around me.

JR: You once said that one of the things you love about the British is our ability to laugh at ourselves. Since the Brexit referendum, do you think we’ve lost that at all?

MP: [laughing] No, life still goes on. I think it’s just stoked the fire really. There’s been some great comedy about Brexit. Stewart Lee for example has been brilliant about it. 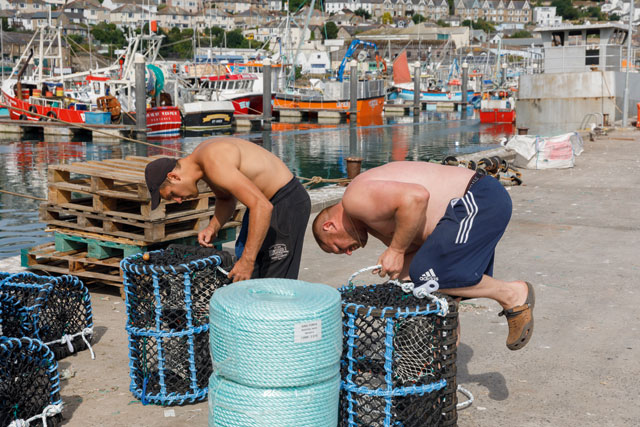 JR: The largest room in this exhibition is called Britain in the Time of Brexit – and it focuses on leave areas. What did you think of the referendum?

MP: I was appalled and angry. I’m a classic remoaner. So I wanted to explore …

Exhibition visitor 4: “Are you Martin Parr? Sorry to interrupt … You did my portrait with my wife …”

Exhibition visitor 5: “I was holding all this stuff we’d brought for our portrait but you just snapped us with me with one boob up here and one down there and you really captured our crazy life … a revelation.”

JR: It must be good to be appreciated?

MP: It’s always like this – in a setting like this. As you can see, it slows you down. Go out into the Black Country, though, and nobody knows me from Adam. After the referendum, I didn’t just go to leave voting areas. I live in Bristol and I photographed many things there, but I did go specially to places like Lincolnshire, the county with the highest Brexit-vote, and other areas that voted strongly for Brexit – and to the St George’s Day parade in the Black Country.

JR: The National Portrait Gallery’s head of photographs, Phillip Prodger, describes you as mischievous, citing the image of the woman (in a Brexit supporting area) walking her dog in front of a huge hoarding of croissants, and there’s the whole-wall image of people on a beach in leave-voting Cornwall looking out to sea with the red danger flag flying.

MP: Yes, we like that one. That’s why it’s so big. The people are looking out to sea, abroad if you like, and suddenly there’s a red flag signifying danger. It’s a very good metaphor for people’s fear of immigration, a very Brexit issue. I wanted to explore, to capture the essence of Brexitness. And of Britishness – and how it’s changing. I don’t want to spell out my message. I don’t know what my message is. I’m not making any conclusions. 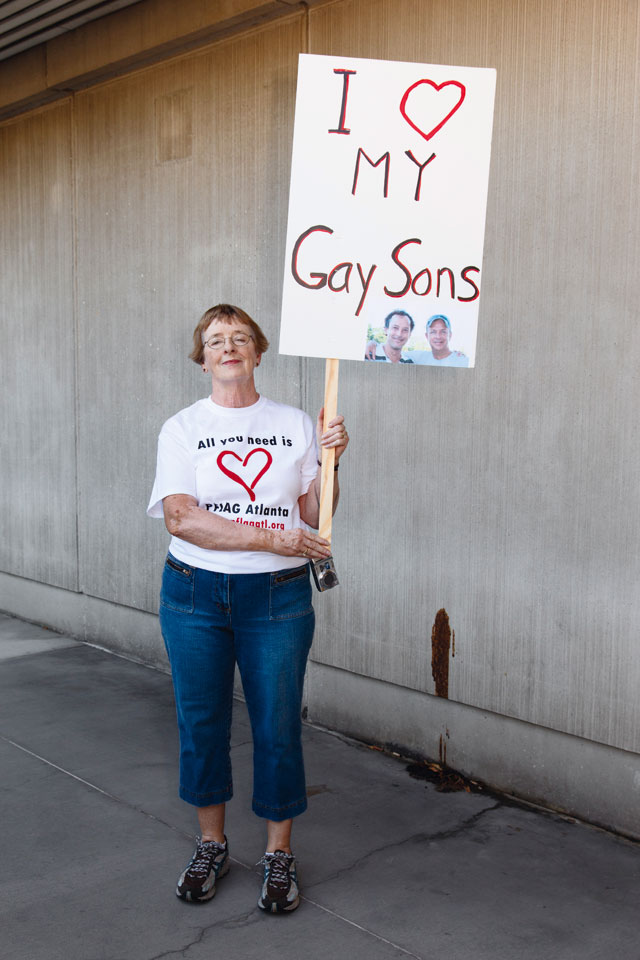 JR: So, to what extent would you say your work is political?

MP: I’m a classic soft left. There is an element of politics in these pictures if you want to find it. And that’s no surprise – I think all documentary photographers, photojournalists generally come from the left. You have to, to be interested in people. You rarely get rightwing, self-motivated, photographers. If you are a photographer for Fox News you aren’t out doing pictures for their own sake, you’re doing it for a commission. I don’t wait for a commission. I just do it. I’m compelled to do it.

JR: You don’t think there are any rightwing photojournalists?

MP: I’m just making generalisations. I’ve been had up for this before.

JR: Most of your pictures are of people.

MP: People are ever-changing, unpredictable, the most interesting thing to photograph. I like people-watching, and talking to people. But, unless it’s a portrait, I don’t particularly talk to the people I photograph. My portraits are posed; the others are unposed entirely.

Exhibition visitor 6: “May I take your picture?”

MP: Go ahead. I take all those people through there, so I don’t see why you shouldn’t snap me.

JR: Do your subjects ever object to you photographing them, or how you have used their image?

MP: About once every five years. Most people write to you and you just send back a print or a file. I did a portrait of Damon what’s-his-name from Blur and he said I couldn’t use it, which was a surprise. That’s never happened before. 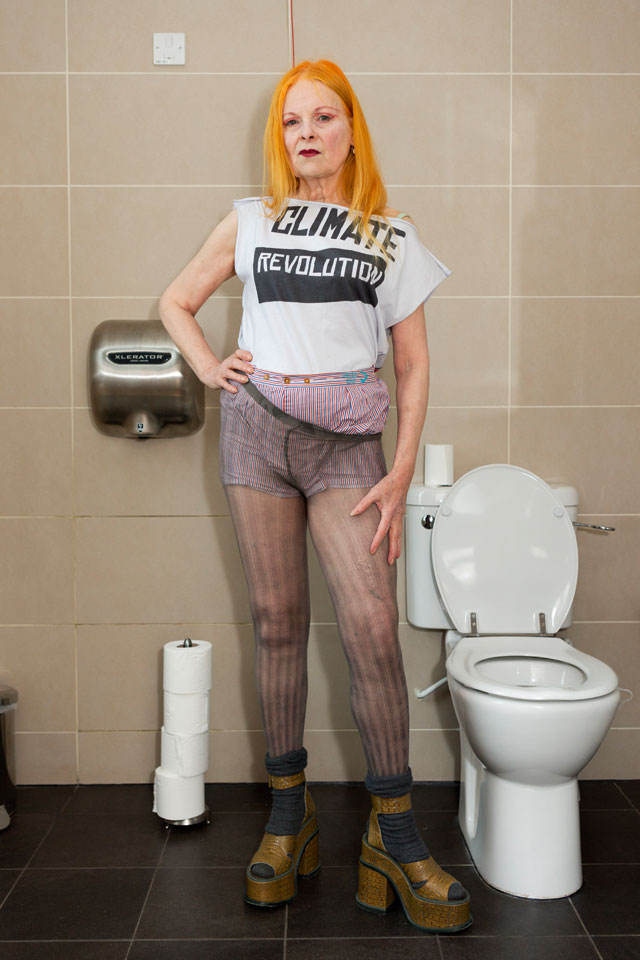 JR: There is a room of celebrity portraits in this exhibition, some quite straightforward, such as Mike Leigh, some in less flattering poses, such as Vivienne Westwood next to a loo. How do you decide how to photograph them?

MP: I put them in their own environment with a simple background – unless being complicated is the main thrust, as it was with Paul Smith. He and I are both junkie collectors.

JR: Finally, how would you sum up this exhibition?

MP: An exploration of British identity and the times we live in – for better or worse.

• Martin Parr: Only Human is at the National Portrait Gallery, London until 27 May 2019. Parr also has current exhibitions (of different work) in Manchester and Bogotá. 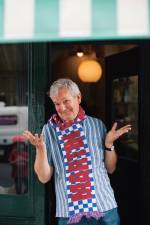 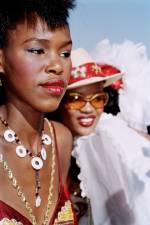 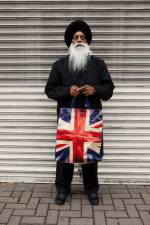