Premiering at the Chisenhale Gallery, Maeve Brennan’s film The Drift (2017) depicts restorative labour as the means to reconstruct Lebanon’s war-torn past and build a new future 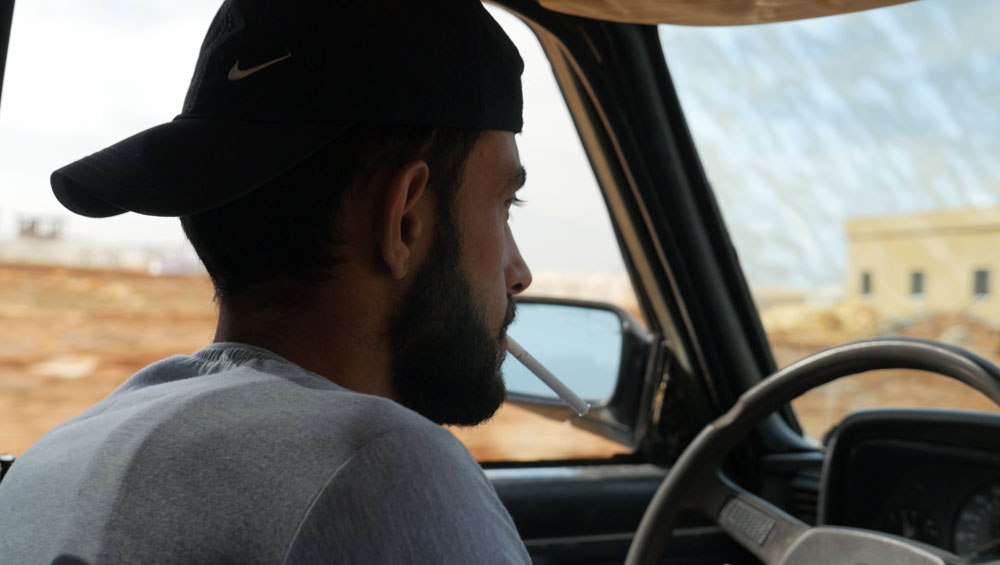 Set in Lebanon, the narrative of Maeve Brennan’s film The Drift (2017) revolves around three main characters: Hashem, an archaeological conservator based in the coastal capital at the American University of Beirut; Fakhr, a gatekeeper of Roman temples around the village of Niha; and Mohammed, a mechanic from a village called Britel – the two villages both situated in east Lebanon’s Bekaa valley, the site of a wealth of Greco-Roman archaeology. Like Brennan’s film Jerusalem Pink (2016), which depicted the repair and restoration of the Dome of the Rock as an act of political and cultural reification, The Drift represents Brennan’s continued exploration of the relationship between Middle Eastern identity politics and restorative labour. Maintenance, repair and reuse facilitate the symbolic reconstruction of Lebanon, a country fragmented by repeated conflict.

The Greek, Roman and Ottoman empires successively subsumed Lebanon; then, following the first world war, the French and British occupied the country, and later the Palestinians, Syrians and Israelis; civil war raged between 1975 and 1990; and, this century, Lebanon has over and again been the battlefield between the Hezbollah and Israel. And yet, while there are occasional references to the country’s violent past in The Drift, it largely forms a distant backdrop. Brennan, who was born in London in 1990 and now lives and works in London and Beirut, eschews a single national narrative predominated by conflict, opting instead to portray multiple versions of today’s Lebanon, each the subject of regeneration and progression.

This is a schema informed by the new historicist Stephen J Greenblatt, whose ideas are often employed by post-colonial theorists to negate the idea that the future of ex-colonies are predetermined by their fractured pasts. Greenblatt insists history is subjective, fragmented and capable of continual reconstruction. “The pieces [may be] altered, inverted, rearranged,”1 he wrote. Aligned with that philosophy, not only do the characters in The Drift represent vastly disparate facets of Lebanese life and labour, they are also all involved in acts of restoration. The conservator repieces antique pottery, previously vulnerable to looting during the civil war; the gatekeeper defends temples in the face of the increasing threat to archaeological heritage posed by the so-called Islamic State; and, finally, the young mechanic, who recycles car parts, seems only to see the regenerative possibility of war. Confronted by the burnt-out BMW of Ali Saleh, a high-ranking officer of the Hezbollah who was killed in a car bomb in 2003, the charismatic mechanic turns to Brennan and says: “Whenever I pass by this car, I look at it and think, damn … these wheels are brand new.”

On the whole, the film succeeds in providing historically and politically diverse images of Lebanon, although, on one count, it falls shorts. All the characters are male, showing a somewhat exclusive view of Lebanese restoration. Although the decision works to counter the notion that violence and war are male preconditions in the Middle East, it leaves women absent from social change. Brenan might have included similarly enterprising Lebanese women to those found in her earlier film The Embroiderers (2016), which depicts Palestinian women reproducing historic embroidery motifs as a means of maintaining a fading national culture.

While The Drift may not show an entirely representative view of Lebanon’s demographic, its hybrid narrative style, which combines cinematic fiction and factual documentary, permits a collaborative relationship between director and subject. On the one hand, Brennan is able to construct a narrative arc over the film’s 51-minute duration (taking us through Lebanon’s archaeological past, its history of conflict and subsequent reformation); on the other, interviews allow the subjects to construct an individualised account of national experience, such that, in effect, the film is as much structured by Brennan, as the people the camera follows. Indeed, the characters often direct the camera: the gatekeeper bids Brennan follow him through the undergrowth at the side of the temple and the mechanic suggests Brennan accompany him for a drive. There is a particularly poignant exchange between Brennan and the gatekeeper’s younger cousin, who finds a beetle marooned on a rock and holds it up to the camera, glancing appealingly back and forward between the lens and the tiny creature. Brennan saw this moment as both “a recognition of being filmed and an offering” – an apt metaphor for the symbiotic relationship between the film’s subjects and its director.

Even the conservator, who is mute and largely stationary throughout the film, seems to formulate his own representation, but crucially only as a consequence of the way Brennan frames him. Focusing on his hands and the pottery he is engaged in repairing, Brennan emphasises his ability not just to structure the camera’s viewpoint but also to mould the environment in which he is situated. For the conservator and the other characters in The Drift, restorative labour provides a means of self-determination but in no small part because of the sensitive and skilful work Brennan does behind the camera.

Reference
1. Resonance and Wonder (1990) by Stephen Greenblatt. In: The Norton Anthology of Theory and Criticism, edited by Vincent Leitch, published by WW Norton & Company, 2001, page 2,155.