Ed Fornieles interview: ‘If you want access to the site, it’s a trade of your photos or data’

Ed Fornieles interview: ‘If you want access to the site, it’s a trade of your photos or data’

For his show at the Chisenhale Gallery, Ed Fornieles has created a suburban Los Angeles television set with a twist. Titled Modern Family, the exhibition explores how contemporary identities are shaped by our online existences

Entering Ed Fornieles’ exhibition at the Chisenhale Gallery is like waking up after an all-night party. Piecing together last night’s events, I manage to locate myself in a Los Angeles suburban backyard. There is a mash-up of scenarios illuminated by bright film-set lighting that flashes and dims. A fruit pie is stuck to a trellis, a giant banana dominates a picnic table, and a pile of children’s furry toys lies muddied.

The exhibition is titled after the popular American sitcom Modern Family, which, set in an LA suburb, examines the evolution of the family today. “What’s interesting about the TV show Modern Family is that it’s a genuine mutation of what family is,” explains Fornieles. “It incorporates the gay family, as well as the older man with his younger Mexican wife, creating this liberal version of the American family. Family is how society replicates itself; it’s very important. Hollywood is very interesting in its portrayal of family. It is a strange space because it broadcasts ideas to the rest of America.”

In the past, Fornieles has constructed sets that deal with teenhood to twentysomethings. He created a college students’ dorm as part of his Royal College of Art show [The Hangover Part II] titled Animal House 2: Revenge of the Nerdz (2011) and for Frieze in 2012 an installation titled Characterdate where you could adopt a new identity and go on a date at the fair. So why, now, is he turning to look at the family? “I’m always interested in the narratives which create individuals,” he replies. “As one ages and progresses, different stories and expectations kick in – I’m interested in that mechanism, so the work will always keep shifting. Family sits at the centre of our society. It’s an economic base, it’s a unit that people can understand, market to and interpret. In a way, family is like a role-playing game. Everyone knows their role, how to act, and everybody else’s expectations of everybody else.”

Brightly coloured contemporary lifestyle images flash across screens on the gallery walls. The music has been left to its own devices, blaring out, then quietening on a disconcerting shuffle. I spot an empty wine glass and half expect to find a straggler sleeping in the gazebo.

Fornieles moved to LA a year and a half ago and now divides his time between London and LA. He points out how the architecture of LA has manifested in the exhibition. “You can see the shopping mall logic, music coming out of sculptures and lamp-posts and very showy elements like the fountain. Also the Spanish-style housing – there are three types of housing in LA: modernist, American workman’s cottage style and Spanish style.”

Food lies uneaten, piled up to excess, fresh bread and fruit left to decay. The hot tub has been artistically trashed by a pastel-coloured wire sculpture that extends upwards. However, Fornieles assures me:  “The show can be seen as a celebration, as much as anything else. The forms have been ripped apart, but it’s to do with process and the spirit in which the work was made. There’s a cycle going on with the lighting and music, but one gives relief to the other, and that structure is contained within all narrative. With every film and every news story, we want that high and low. The context of the barbecue and the hot tub, all these things point towards a slightly Disney-fied moment.” I ask Fornieles to dissect the hot tub scenario. “The hot tub is this sleazy place where the parents have their party, then when they go away the kids do their dirty partying. The wire sculpture is very much about drawing and the direct associations that come with the party. The martini glass leads to the Eiffel Tower, which leads to the stiletto shoe, which leads to the lipstick, which leads to the knife – it’s a very simple, hashtag-esque way of associating imagery.”

The hashtag function is used across online platforms to group items that can then be easily searchable. Fornieles uses the hashtag in his online work to generate images that blast across screens mounted on trellises. The foreground and backgrounds are tagged to popular words or individuals as they upload more images. Fornieles says: “The online part of the show involves aggregating thousands of people in search terms and creating compositions from Tumblr, Instagram, Pinterest and Google Images. It’s about watching other people perform, and a broad landscape is created by tapping into current trends and news stories as they unfold. The show is then an instance within that landscape. The images update themselves, so it’s a for ever contemporary piece of work. We hope to roll out this huge website that is sucking in data and regurgitating it as new forms.

“I’m interested in the idea of embodying a platform whereby I’m trading in the commodity that is data, taking on a detached perspective. It’s a trade, and that’s what happens when you exist online. You trade your own data access and the ability to communicate with other people, to express yourself or be part of a forum.”

This is echoed by text in the gallery – a huge wire sculpture that reads “Be Yourself” and further along the wall “We are one”. “There’s a tension between this idea of being an individual, as well as part of a group, both are slight delusions and illusions,” continues Fornieles. “You consider yourself an individual, but you use a signifier of a group to establish yourself as an individual. You can’t exist without other people, yet you position yourself as something that isn’t reliant.”

To access the website, visitors must sign in with their Facebook login. Fornieles is instigating a trade that begins with you. Your images will then be projected into the gallery and viewable to all visitors. I try to hide an expression of anguish at the thought of my personal photographs being displayed at the Chisenhale Gallery. Fornieles is unfazed: “This is not illegal; it’s just what you can do. Your information is constantly being traded, moving round, and I’m mimicking that process. If you want access to the site, it’s a trade of your photos or data. I really want to push the website and grab more sources, investigate individuals, take more and more. A logic of escalation is inherent in the work. Once I have the data I can use it for ever.”

Fornieles repositions the computer screen back into the era of the television screen, where control is relinquished and the viewer becomes passive again. He explains: “We lost something when we lost TV, which was the ability to not click. Formats die constantly and I quite like it when they do, but with television we lost passivity – it was a very controlled stream – you had your television and this very nullifying flow of content. There was no leaning forward and no clicking. I now crave moments of total passivity. I like this website because sometimes it washes over me. I have no control because the compositions are pre-created.”

Modern Family is an exhibition caught between a nostalgia for something dependable and a celebration of new formats. On his most ambitious set yet, Fornieles has created a visually enticing performative zone both inside the gallery and online. 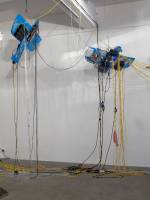 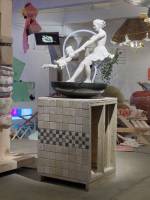