In Leung’s new installation, it is clear she has a point to make. Just what that point is, though, is not so clear 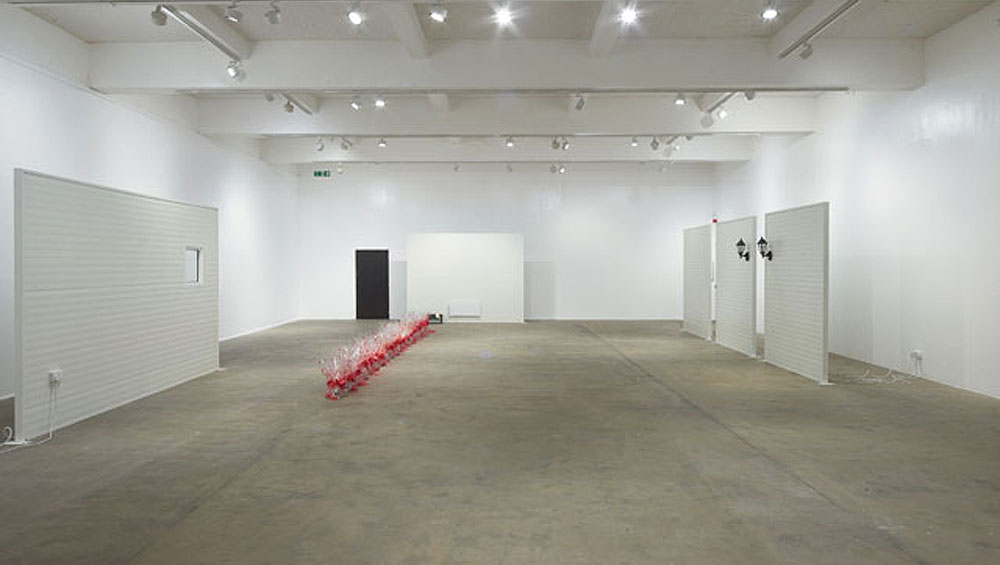 The stench of gloss paint is the first thing to assault your senses as the door at the Chisenhale Gallery opens into Constitution, a new installation from the London-based artist Ghislaine Leung (b1980, Stockholm). The second is the low-frequency hum that emanates from two tall, slim, black speakers placed close together on the left-hand wall. Visually, however, there is little of a stimulating nature: groupings of plain, white, prefabricated panels, of the kind that would normally be used to subdivide offices or an apartment, are ranged around the room. Two of them have windows, but no views. 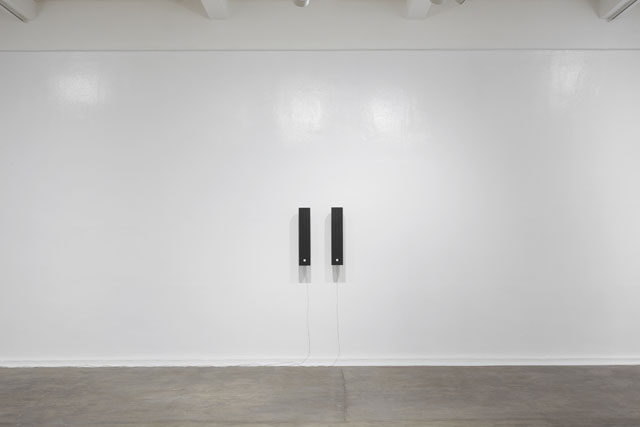 The doorway into the gallery has been modified, shrunk down to the same quotidian, office/domestic scale and style as the room’s two other doors, and all of them painted with glossy black paint – hence the stench, as well as that emanating from the thickly glossed white walls. Against this dull, neutralised setting, an incongruous parade of flamboyantly wrapped china mugs marches across the floor towards the end of the room. In black lettering, they declare: The Boss. There are 20 of them, swaddled in cellophane wrapping with synthetic red bows, the outer frills of which are sprinkled with a profusion of red hearts. (Who is The Boss? Are these mugs devotional objects, intended for one boss? Or are they a wry statement, flagging up the delusions of the many who think they are in charge?) 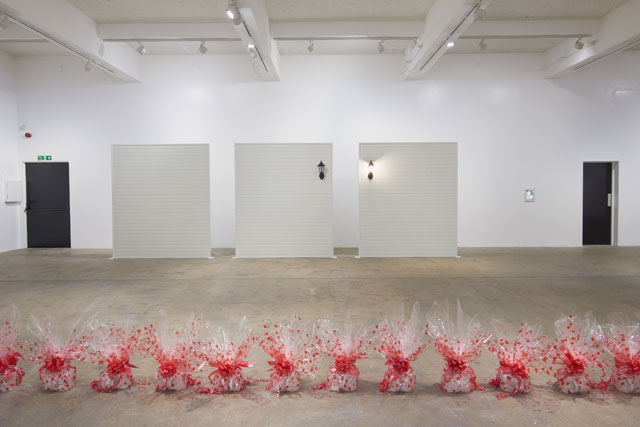 Around the back of one of the freestanding room panels, a large TV screen is placed so low and so close to the wall as to preclude comfortable viewing. It plays an instructional video on how to create a monstrously kitsch balloon rabbit that appears to be trapped in its own pink, womb-like, balloon enclosure and is appended with umpteen celebratory balloons and ribbons.

From this emanates probably the third major sensory assault (unless one counts the experience of being simultaneously baffled and aesthetically underwhelmed): no sound accompanies the film. But as one watches the deft hands of the balloon “artist” stretching, stuffing and snapping the rubbery material, there is an acute sensation of the sound that we should be hearing – an inner squirm, a visceral sense of the absence of the appropriate squeaks, snaps and pops, which is probably more vivid than their presence would be; the resulting feeling of acoustic deprivation is intensified by the dull, persistent throb emanating from the two speakers, whose tone shifts periodically in intensity – all the more so, as you move around the room. 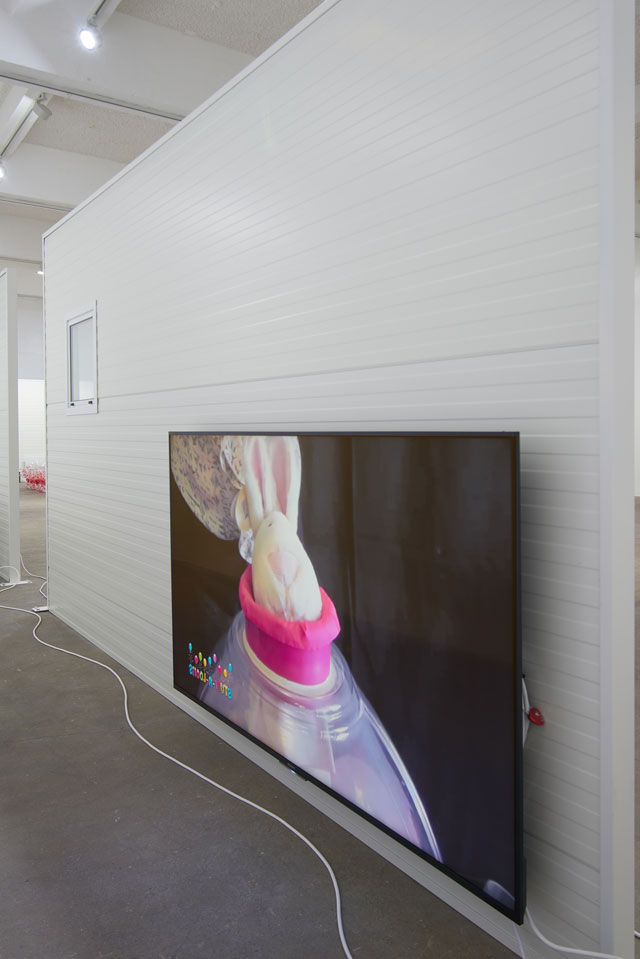 The publicity for the show states that this new work from Leung “addresses the ways in which we seek to assimilate to, and internalise, conditions of high production, efficacy and visibility over maintenance, care and love”. Hmmm … I think that needs a little unpacking. Let’s start with “maintenance, care and love”: certainly the walls and doors look well maintained – if rather odoriferous. But the gallery handout tells us that the walls and doors are not the work, although the act of shrinking and painting the doors is, and it’s called Closer (2019). In the list of works itemised at the back of the handout, Leung states: “The work physically exists when the door and doorway are standard size. The door and doorway are not the work.” The glossing of the walls, too, is a work: Toons (2019) “consists of all internal walls being painted gloss white … The paint and walls are not the work.” The handout is very specific about how the elements must be treated and placed in order to constitute “the work” – from the two 4m x 2.3m room panels with windows, power cables, media player and monitor showing the Stuff-a-loons tutorial that constitutes the work Parents (2019) to the Bosses II (2019) piece, comprising the aforementioned edition of 20 The Boss mugs; they must apparently be assembled together in order to constitute the work. But “care” and “love”? Could she be referring to the aforementioned hearts on the mug’s packaging? Or perhaps the other little heart stickers occasionally appearing on items in the show, including a wall-mounted iPad that plays a selection of still images taken from the last three years of Leung’s investigations? 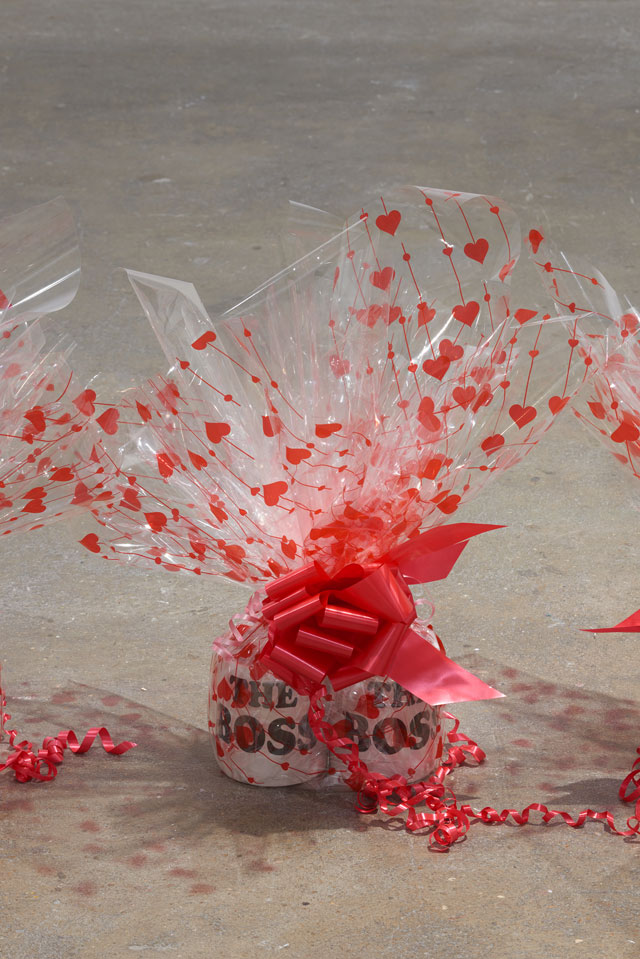 Leung herself – in an interview with curator Ellen Greig, in the aforementioned handout – says she comes from a background of structural/materialist film. Which will mean nothing to an awful lot of people, including me. But some illumination is provided by Peter Gidal’s introductory essay in Structural Film Anthology (published by the BFI in 1976). He says: “An avant-garde film defined by its development towards increased materialism and materialist function does not represent, or document, anything. The film produces certain relations between segments, between what the camera is aimed at and the way that ‘image’ is presented. The dialectic of the film is established in that space of tension between materialist flatness, grain, light, movement and the supposed reality that is represented.”

There is certainly “flatness” in this installation. This flatness is an act of resistance, Leung seems to indicate in her interview. “If you want to block something – whether that is a person or a policy or an idea, you put something between you and it, you refuse to continue, you isolate yourself from it.” 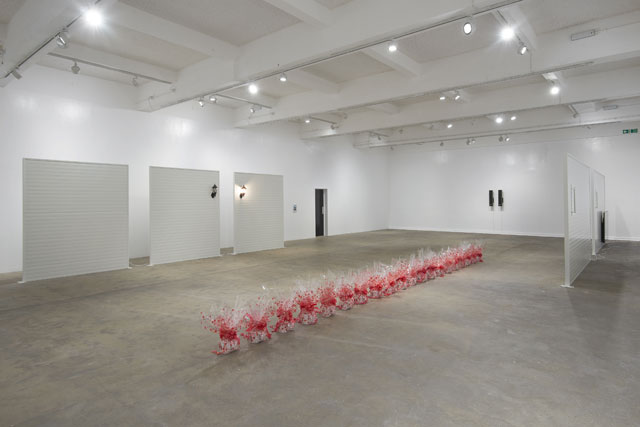 The sound coming from the twinned speakers is an act of resistance. The noise we hear correlates to timed segments of tune, chat and advert taken from three different commercial radio stations (hence the name Kiss Magic Heart, all UK stations). Leung says: “I became interested in active noise-cancellation technology as a way to experiment with a different kind of resistance. With active sound cancellation, you’re not just blocking sound; noise is cancelled by playing back its opposite.”

Noise cancellation of this kind is only really effective with headphones. When played over speakers, all kinds of other elements come into play. Leung says: “The cancellation works in the space by creating pockets where frequencies are reinforced and cut, depending on where two channels of sound hit each other, hit the space and hit you as a person walking through that space.” The close positioning of the speakers, she says, produces “the most difference in cancellation without cutting the sound entirely. So, some parts of the audio cancel, other parts not. The sound becomes highly contingent upon the bodies of the listener and the building’s structure.”

But if you don’t know any of this, and walk into the room in a state of uninformed, even partially primed curiosity (which, let’s face it, is the likely state of the average visitor for a gallery on the edge of London, however “edgy” its reputation), nothing of that intriguing cultural context is apparent. Having thought long and hard about the show – far longer and harder than the average gallery-goer, because I have elected to review it - and what Leung is trying to say, I see how it all stacks up, intellectually. I can see how droll it is to fill a room with charmless objects and put heart symbols on them - but why so few of them and so subtly that the joke or reference could easily be missed? I see the cleverness of Leung’s reduction of the relentlessly sales-oriented commercial radio soundtrack to a flat, unappealing drone (suppressing not just the adverts but the tunes in between, which are – obviously – also advertisements for the commercial music business these radio stations support). These are all good points. But are there not more, engaging, impactful, less opaque ways of articulating them?

Leung, in her interview with Greig, says this Chisenhale commission encouraged her to develop her interest in constitutional critique to a “more material understanding of constitution, questions of how and where things are constituted. What is the constituency? Who am I as a constituent?” Ultimately, did my interactions with her installation throw any new or interesting light on my understanding of myself as a constituent or “how and where things are constituted”? No revelations there, I’m afraid. As I leave the gallery, a lean, rangy, elderly man in an anorak strolls in. I would love to know what he made of it … 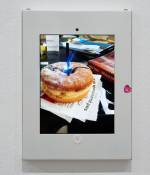 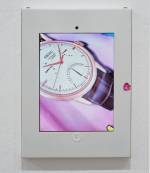