The Berlin and Brussels-based artist discusses the benefits of repetition, grappling with tradition, and being an extra in a film with Tom Cruise 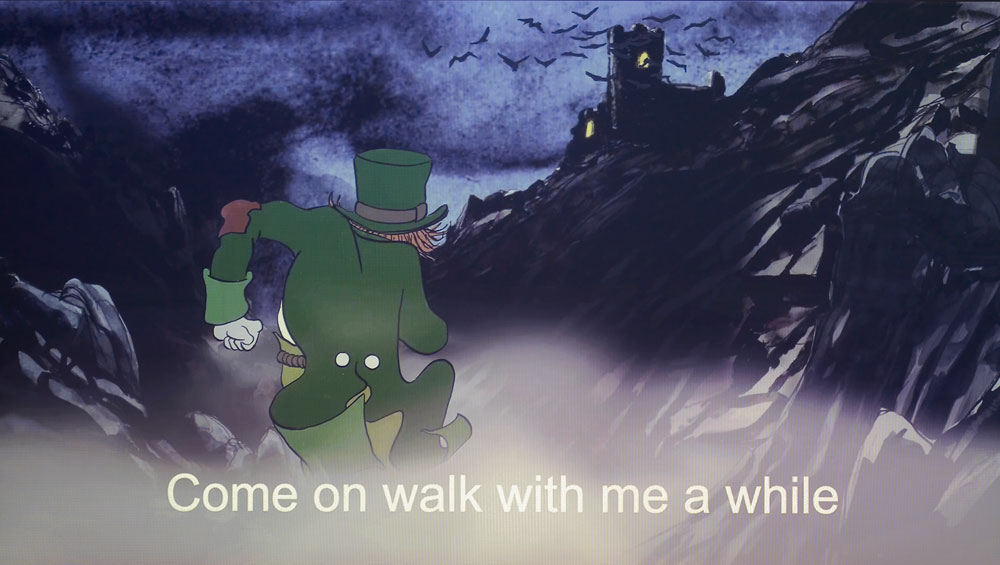 For his first solo exhibition in a UK institution, Peter Wächtler (b1979, Hanover) presents a short film created through traditional cel animation and with a rock’n’roll soundtrack. Although a multidisciplinarian working in several mediums, including sculpture, drawing and writing, the artist has focused his attention on animation for his current show, Far Out (2016) at the Chisenhale Gallery. With the help of editor Adam Milburn, Wächtler has created a unique animation. It is also the first time he has written a lyrical arrangement.

Alexander Glover: There’s an ominously placed top hat [Eat Your Own Ingredients, 2016] directly outside the room showing Far Out. What’s the story there?

Peter Wächtler: That is the edition for Chisenhale that relates directly to the film. I thought it would be a nice thing to transfer from that comic world of the film into the foyer world of the gallery. The hat is heavily worked on: it has a very used feel, an exaggerated fake patina.

AG: It has a very ghostly presence …

PW: Yes, it is difficult to imagine the person who normally wears it, or why that person would have lost it. In its steam-punkish way, it sometimes looks as if it belonged to someone who is, um, dead.

AG: Could you talk a little bit about your process for this film?

PW: I wish I could. I can’t really speak about the process because I was stumbling along, not in a dramatic way though. But it was quite a staggered process.

AG: How did the idea for the narrative come to you?

PW: The initial idea was about combining two screens in a space where somebody is walking away in both directions. So you are seeing somebody vanishing on two screens. Anyone in the centre is left alone. Most of the details of the initial thoughts never made it to the final cut. What was left from that period, though, was that I wanted to have song in it. I wanted a music video format. It sounds very referential, but it really is more about the short duration. The lyrics are so condensed. So I had to write the lyrics, and then I had to sing, which I’ve rarely done in this way before. There’s such a huge difference between writing words that are meant to be sung, and writing those to be read. That’s obvious, but that just rendered most of my attempts to write useless.

AG: Is it more personal?

PW: It’s complicated. Not that I necessarily wrote complicated stuff, but all the attempts sounded witty and pretentious and when I sang them, even more horrible – like some sort of Leonard Cohen rip-off. This is not to say anything about Leonard Cohen – and I would not dare/care to – but I wanted to have something lighter, more upbeat, more drum than lyre. So I needed to keep the song plain. The theme of it is that somebody wants to leave in a good spirit, if possible.

PW: Oh, yes, for sure. Rock songs are usually played in very stagnant places like pubs. In these places, you sometimes stare at screens that are not related to the songs, so there are these intersections between the film and the music.

For the clip, the setting is almost too childish, or too gothic in the film. In contrast, the music is very upbeat, like 50s rock’n’roll, closer to generic entertainment and mood improvement, not too much about self-pity.

AG: Was this the first time you had composed the music for one of your films?

PW: Esben Tjalve, a Danish jazz composer living in London, wrote and played the music and I wrote the lyrics. I started working on it with Hans Friedrich Lissman during the summer, and he helped me to get into the singing and to try things out, as I can’t play an instrument. There’s a Steinway shop and a very affordable rehearsal space in the building I live in, so we started playing on those to create the music. Huge pianos.

AG: For your 2013 film Untitled (Heat up the Nickle), you depicted a scene of homeless men around a campfire in your distinctive illustrative aesthetic. This, combined with your interest in traditional rock, led to me to wonder if there was a connection between the film and Jethro Tull’s classic rock album Aqualung (1971), which depicted a similar scene on the cover?

PW: Ah, yes, it’s a beautiful cover, isn’t it? But, no, there is no connection. I’m not really interested in rock, but it uses these rhymes and repetition, which is something I do investigate for my own work. And, of course, it makes me dream of a life way better than this one.

AG: But at the same time, all these references and elements in your work are incredibly traditional. The style of animation and the rock’n’roll soundtrack are as traditional as it gets. And yet, when you meld them, something completely new happens. What can you attribute this to?

PW: It’s a strange mixture of respect and total disrespect. The treatment is quite detached from the actual imagery and sounds of the film. These elements are very rich, or let’s say generous. There’s a kind of specific sentimentality to these elements, but I try to use them in an abstract way, in a very neutral way. I wish I could say I am interested in composition, collage even.

AG: Repetition is crucial to your work. What does it provide you with?

PW: It just provides me with some brackets. It’s a technique that’s often used in concrete poetry – when you write tree and it looks like a tree. But there is a way of using lists to establish a sort of drive. I enjoy that, but I like stepping in and out of this sort of grid while highlighting things. This grid is a mantra, a rhyme, an inventory, a list. The words for the song of the clip are closer to wedding-day speeches of sentimental dads and the old misunderstanding that poetry’s main feature is that poems are rhymed in a skilful way, written in rhymes. But even with this background of hubris, self-overestimation and kitschy festivities, I do respond to these things (sayings, speeches, bad rhymes) more than to, let’s say, higher or experimental poetry. That is not meant to be populist – I wish I could relate more to it. I am trying, and I am also getting better at it. Which makes me uncomfortable, too.

AG: How did you get involved as an extra for the second world war film Valkyrie (2008)?

PW: Tom Cruise played Colonel Claus von Stauffenberg who planned to assassinate Adolf Hitler. There was a huge debate about this film in Germany because of Cruise’s membership of Scientology. Most of the conservative parties didn’t like the idea that a Scientologist would re-enact the part of the small resistance within the Nazi regime. So much for the research, in which I am not interested. At that time, I did care about the depiction of freelance labour and I was attracted to the world of film-making. It’s quite a classical topic this backstage or onstage aspect. It’s almost very boring. But I’m also a huge Tom Cruise fan.

AG: I can’t tell if you’re being serious or not. He was the first person I ever saw on television.

PW: Imagine a future Mission Impossible without him? That would be horrible. Who would do it? I saw the trailer for Jack Reacher: Never Go Back yesterday: Cruise’s films are getting more and more private, a private re-enactment of a huge popular myth. I think he largely produces these films himself, too. I like that autonomous system.

AG: Is there any animator or animation that you refer to during the making process?

PW: No, I wish. There are obviously animators I admire, like Richard Williams who created Roger Rabbit. But people like him are true animators. They dedicate their lives to it and I do not see myself as an animator. I don’t have a studio or anything, so I don’t deal with any of this profession, its tradition and its teaching. I do admire the casual and pragmatic way of producing and handling drawings, very technical.

AG: I guess walking is one of the most repetitive things humans do, which fits tightly with your ideas about repetition?

PW: Yes. You can put a lot into it with the speed, weight, etc. The walk is very telling and, traditionally, the walk is one of the first things to learn in animation. The very first I think is a bouncing ball.

AG: Could you talk more about the subtitles in the film?

PW: The subtitles are like trolling. Like on the internet when people ridicule others. You know, when you have someone [me] singing so ambitiously with no skills on the film, these comments can completely dismantle these efforts. So the first version of the subtitles was very vulgar and more insulting, but then they changed into something closer to a second text, song, voice in the subtitles, and the trolling wasn’t that present any more.

AG: The element of humour plays a vital role throughout your animation work. What is it about humour that is important for you?

PW: I’m not trying to write something necessarily funny. That’s a very hard thing to do. What I think I do is pitch some of these elements I use in an exaggerated way, that it sometimes becomes ridiculous.

AG: There are obviously so many different elements going on besides humour in your work. It’s emotionally complicated. In this film, it’s kind of sinister, funny and sad. But in this film more than the others, it’s optimistic.

PW: That’s good that you said that. One ambition for this film, or this exhibition, was to do something good-mooded, high spirits, not melancholic and sinister, which I find sometimes a little generic. Elegy is easy.

AG: What’s next for you?

PW: I will go on vacation tomorrow.

Peter Wächtler: Far Out is at Chisenhale Gallery, London, until 11 December 2016.